In the face of continuing threats politicians and the public in Europe will have to steel society for confronting terrorism and living in its aftermath. 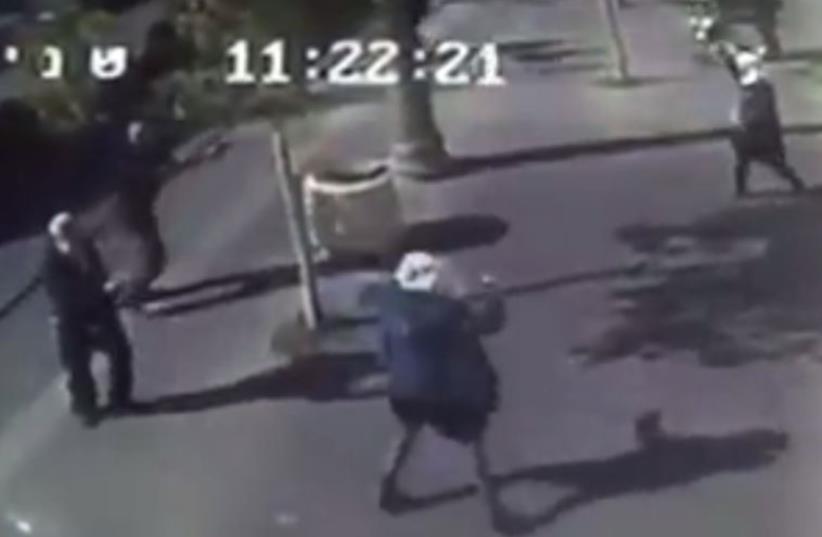 Scene of stabbing attack in Jerusalem
(photo credit: screenshot)
Advertisement
Yesterday two Palestinian teenage girls committed a stabbing attack meters from Jerusalem’s bustling Mahaneh Yehuda market. Within moments they were prevented from causing further harm by the quick intervention of numerous people, who ran to subdue the assailants. An hour later the scene of the attack was clean, people were shopping, and music was drifting through the air from local stores.This is not because Israel is inured to terrorism or takes it lightly. It is precisely because of years of dealing with a terrorist threat that the country’s systems work in well-oiled synergy. The citizens and the security services, with rare exceptions, behave well under immense pressure.In Europe, the city of Brussels has remained on lockdown since Saturday as police hunt Paris attacks suspect Salah Abdeslam. Security forces arrested 16 in anti-terrorist raids, but nevertheless authorities have maintained the highest alert level possible. The Metro, universities, schools and public venues remain closed. Last night saw police in balaclavas in major hotels, such as the Radisson Blu, which was the target of attacks in Mali last week.A major concert by Johnny Hallyday was canceled. The army brought in lorries full of combat troops. “What we fear is an attack similar to the one in Paris, with several individuals who could also possibly launch several attacks at the same time in multiple locations,” said an official.This is an unprecedented state of affairs in the EU, which has shaken the foundations of the Schengen open borders agreement that was put in place 30 years ago. The November 13 Paris attacks have ushered in a new urgency in the fight against terrorism among member states. At a meeting of the European Commission last Thursday, the members of the European Parliament discussed the need to reform information sharing among states and Europol.Further work was proposed on a passenger-name records database and other methods to keep track of suspects.Across Europe and even in Turkey, the network of terrorism behind the Paris attacks is coming to light. A 51-yearold man detained in Germany’s Bavaria traveling with guns is suspected of links. There is ample evidence that had some dots been connected before the attack, it might have been prevented. Hindsight though is always 20/20, as it was when the failures to stop 9/11 were investigated.If terrorist attacks cannot be prevented, security services can do more to learn from one another the best methods to use during attacks. One of the issues that came to light in similar style mass-murders in Mumbai and Kenya was the need for anti-terrorism operations to proceed quickly to neutralize the perpetrators. There has been a shift in terrorist strategy from the “hostage” style events of the pre-9/11 period to the mass-murder objectives of Islamist terrorism that has dominated for the last 15 years. Whether it is the Souse attacks in Tunisia, or the In Amenas assault in Algeria, the objective are the same.This means a plethora of countries face the same struggle.This issue was highlighted in Indian Prime Minister Narendra Modi’s speech in Malaysia on Sunday. “Terrorism is the biggest threat to the world today,” he said.“It has no boundary. When I say the world has to come together, I am not talking just of security cooperation. It means no country should support terrorism – no sanctuaries, no funds, no arms.”These are important points to build on. The terrorists often exploit the weaknesses of open societies, such as those in the West, to move unnoticed and use the relative freedom accorded them to recruit. But while the terrorist has the element of surprise and choice of target, inter-governmental collaboration can deny the enemy an ability to strike at will. For instance, a stricter crackdown and gun control in the EU appears to be a necessary consideration.At the recent Jerusalem Post Diplomatic Conference, Prime Minister Benjamin Netanyahu reached out to Europe, arguing that we all face a common fight, and he reiterated his commitment to stand with France. There is much that can be learned from Israel’s decades-long battle with terrorism. While the Brussel’s lockdown may be a temporary measure, in the face of continuing threats politicians and the public in Europe will have to steel society for confronting terrorism and living in its aftermath.