Antisemitism: Out of hibernation and traveling at warp speed

Antisemitism undermines and attacks not only Jews, but all of us. 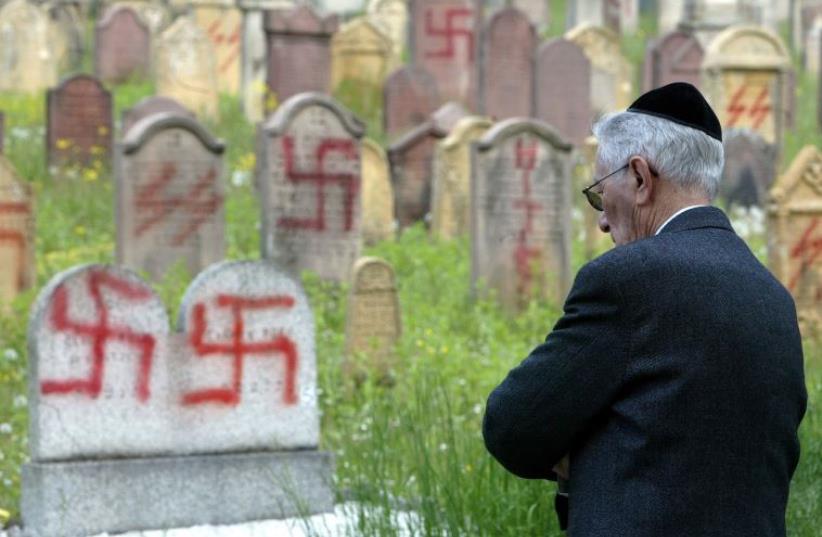 A Jewish man stands near some of the 127 graves desecrated by vandals with Nazi swastikas and anti-semitic slogans in the Jewish cemetery of Herrlisheim
(photo credit: REUTERS)
Advertisement
After a hiatus of relative calm, antisemitism has been accelerating at an alarming pace across the globe. Its most ominous surge is in Europe, Australia and North America – those traditional bastions of equal rights. All is not quiet on the Western front. Global antisemitism rose 30% in 2013 and 40% in 2014; in Europe, it increased sevenfold from the 1990s to the 2000s. “These are the worst times since the Nazi era,” German Jewish leader Dieter Graumann told The Guardian. “It’s pure hatred against Jews, nothing else.” Last year, antisemitism exploded exponentially, prompting US Jewish leader Malcolm Hoenlein to warn of a “pandemic in formation.”Europe is the seedbed of global antisemitism. Its roots are so deeply embedded in European culture and institutions that any type of spark can trigger a fire. Sparks fly from rightwing and left-wing extremists, nationalist political parties, radical Muslim refugees and allies, the Israel-Arab conflict, society’s discontented fringe elements, social media use – all these play a role. But antisemitism boils down to hatred – irrational, double-minded and deluded. And in the hands of institutional power elites – governments, academia, media, corporations or misled religious institutions – it’s increasingly dangerous.Like locusts lying dormant for years before emerging as a destructive horde, resurgent European antisemitism should surprise no one. Nazi Germany alone did not spawn the Holocaust – sympathizers in Western and Eastern Europe plundered and murdered scores of Jews. Despite dormant periods, antisemitism never disappeared in Europe. It just went underground.In America, overt discrimination against Jews reared its ugly head from the early 20th century until after World War II. While pockets of snobbery and racism remained, from the late ’60s to the late ’90s, a nearly global reduction in institutional antisemitism put Jews more at ease.According to author Alan Dershowitz, antisemitism in America reached an “all-time low” during that period; public expressions were rare, even among power elites, and anti-Zionism dipped slightly. That welcome respite witnessed “the virtual elimination of institutional antisemitism in most parts of the world.”The distinction between institutional, officially approved antisemitism and individual bias is key. Consider the change after president Barack Obama took office in 2009, and placed pro-Muslim cronies in positions of influence in government, the courts, academia and other institutions.Obama’s grip on power opened the floodgates to anti-Israel and anti-Christian expression in America.Poland in the 1930s provides a parallel warning. Immediately after the 1935 death of leader Josef Pilsudski, a strong supporter of equal rights for Jews and other minorities, those Poles previously intimidated against launching a full-fledged attack on their nation’s Jews moved publicly to purge the Jews from Poland. Likewise, in the Jewish Scriptures, after a pharaoh arose in Egypt “who knew not Joseph,” the Hebrews were forced into slavery for 400 years until God sent Moses to free the captives on the first Passover.Arguably, the most dangerous form of antisemitism is state-sponsored and institutionally implemented.Public institutions and other power elites wield great influence. If they embrace antisemitism, their influence could infect many, and antisemitism could mutate to “normal” thus putting Jews at grave risk. The good news is the brave men and women who speak the truth in the face of opposition.US Ambassador Nikki Haley is confronting anti-Israel bias at the United Nations. Recently, UNESCO director-general Irina Bokova publicly rebuffed all efforts to deny Jewish history in Jerusalem – contrary to the positions of UNESCO’s member states.No matter what form antisemitism takes, religious, racial or anti-Zionist; no matter how its disproportionate hatred and double standards are manifested, civilized, rational truth-seekers must fight this poison before it’s too late. Antisemitism undermines and attacks not only Jews, but all of us.No being has more institutional governmental authority than the God of Israel. And He has issued the decree: Whoever blesses Israel will be blessed, and he who curses Israel will be cursed.