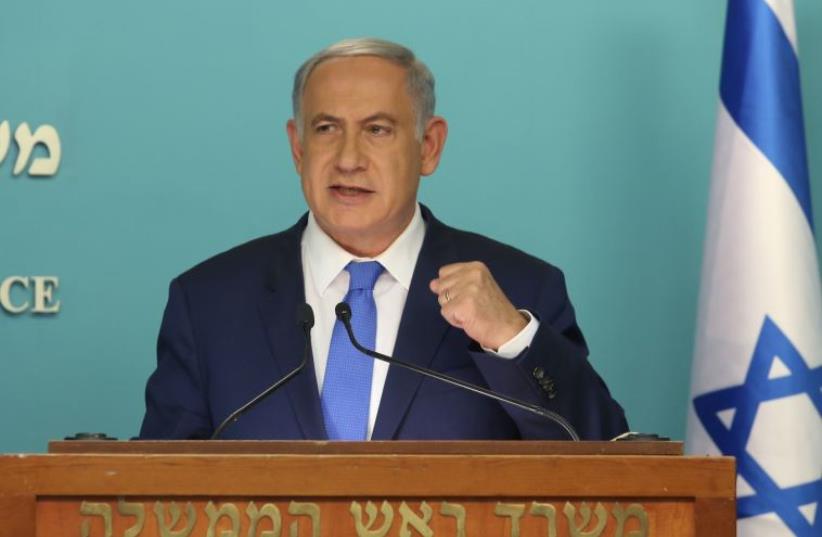 Prime Minister Benjamin Netanyahu
(photo credit: MARC ISRAEL SELLEM)
Advertisement
Negotiating with religious extremists is a waste of time. Concepts such as “compromise” and “live and let live” simply do not register with them – nor does the term “democracy.” The Kotel deal is a case in point.At the end of January, a majority of the ministers who make up the cabinet voted to reserve an area south of the Western Wall plaza for non-Orthodox prayer and to provide a place for the Women of the Wall group. A centerpiece of the deal, which was the result of long months of negotiations and compromises on all sides, was that all denominations of Judaism – Orthodox and non-Orthodox – would share a common entrance. Entering through the same door symbolized equality. Upon entering, each visitor would be given the opportunity to choose where he or she felt most comfortable praying.Ministers Ze’ev Elkin (Likud), Uri Ariel (Bayit Yehudi), David Azoulay (Shas), Arye Deri (Shas) and Ya’acov Litzman (United Torah Judaism) voted against the proposal.This week senior UTJ MK Moshe Gafni declared that his party would only accept the plan for a non-Orthodox prayer section if there were no common entrance for Orthodox and non-Orthodox visitors. He also hinted in a conversation with The Jerusalem Post’s Religious Affairs Correspondent Jeremy Sharon that his party would not accept formal recognition of non-Orthodox denominations by the State of Israel.“We will not allow them to be with us in any way,” Gafni declared in a speech on Tuesday at Kibbutz Hafetz Haim before hundreds of members of his political faction Degel Hatorah, one of two parties that make up UTJ. “Not at the entrance to the Kotel, not at the exit, we will not allow in any way recognition of the Reform, and not those similar to them.”In addition to disparaging Jews for adhering to beliefs different from his own, Gafni rejected the authority of the Supreme Court. “The Supreme Court can rule whatever it wants, we will continue on our path... as we have been instructed by our rabbis,” he said.These are hardly words of compromise and peace. These are words of war.Gafni and his fellow travelers are angry at the courts.It was as a result of a decision by the Jerusalem District Court that religious zealots from UTJ, Shas, Bayit Yehudi and the Likud were forced to enter into negotiations with the Women of the Wall and the non-Orthodox streams of Judaism in the first place.In April 2013, Judge Moshe Sobel upheld a magistrate’s court decision that ruled that women who wear prayer shawls at the Western Wall Plaza are not causing a public disturbance, and therefore should not be arrested. Sobel and the magistrate’s court rejected the “blame the victim” argument that claimed that by donning prayer shawls and tefillin and reading from the Torah scroll in public, Women of the Wall was inciting to violence. It was not unlike the argument sometimes put forward that women who wear short skirts are to blame if they get raped.In any event, after the courts supported the right of Women of the Wall members to pray the way they wish to inside the Western Wall Plaza, the religious zealots were forced to negotiate with them so they would willingly go elsewhere to pray.The Women of the Wall and the non-Orthodox streams of Judaism were willing to give up their claims to egalitarian pray in the Western Wall Plaza proper on condition they were provided an alternative area.A compromise had finally been reached. But now like spoiled children, MKs who march to a different, more pious, drummer are trying to put pressure on the government to renege on a deal that was reached in good faith.Prime Minister Benjamin Netanyahu must rise to the occasion and remain committed to the cabinet decision.True, his government coalition, which rests on a razor-thin majority of 61 MKs, is in danger of being toppled. Shas and UTJ MKs have threatened to quit the government if the Kotel deal is implemented. And Netanyahu could take the easy way out and decide not to decide. Eventually, the issue would reach the Supreme Court, which would rule in favor of Women of the Wall and the non-Orthodox. But Netanyahu has an opportunity to do something different.He can stand up for the idea that democratic decisions must be respected and that religious rights must be upheld, and move forward with the Kotel deal with, or without, the haredim.