Arafat is not a hero

Arafat has been dead for almost 12 years now, but his legacy is very much alive. So long as it is, the dream of peace will remain a distant illusion. 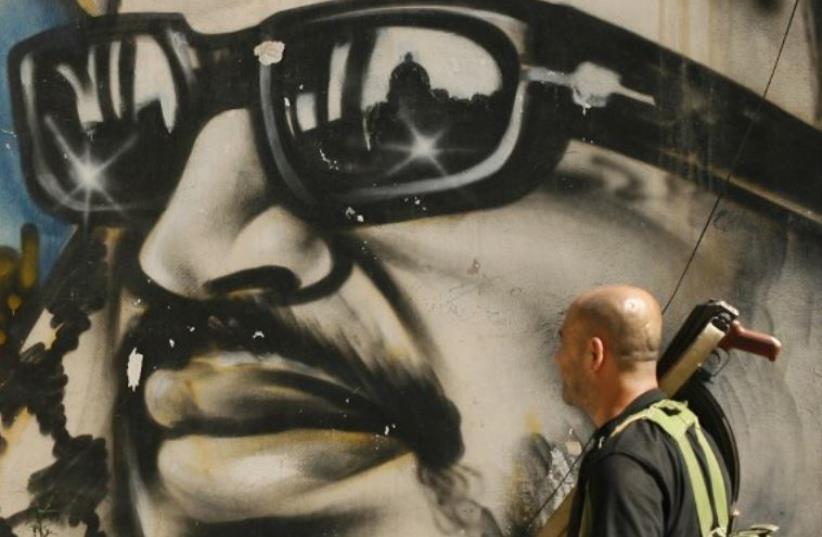 An armed man walks past a graffiti depicting late Palestinian leader Yasser Arafat in Lebanon's southern Palestinian refugee camp of Ain El-Helweh
(photo credit: AFP PHOTO)
Advertisement
For the most part, Ramallah is like many other cosmopolitan urban centers. The prosperous de facto Palestinian administrative capital boasts museums, cultural centers and cafes, including “Stars & Buck,” a coffee shop bearing a green and white logo unmistakably similar to the iconic Seattle coffee chain.What’s most striking about Ramallah, however, is the feeling that Yasser Arafat is still alive. Walk around the city and you can’t miss Arafat’s face looming down from banners and posters. In government offices, his portrait hangs alongside that of the current Palestinian Authority President Mahmoud Abbas, though Arafat’s is sometimes larger and more prominent. Strike up a conversation about politics with any Palestinian and the conversation invariably turns to Arafat.The Palestinian people longingly remember a hero who gave voice and vision to their dreams of a Palestinian state. That he failed to give them an actual state when he rejected the deal offered by Bill Clinton and Ehud Barack in 2000 is of no consequence.Arafat wanted far more than the West Bank and Gaza Strip; he wanted total victory over Israel. In a 1996 speech in Stockholm, he made his intentions clear, stating, “We plan to eliminate the State of Israel and establish a purely Palestinian state.We will make life unbearable for Jews by psychological warfare and population explosion... We Palestinians will take over everything, including all of Jerusalem.”To this end, Arafat gave birth to an uncompromising, indefinite violent struggle that lives on today.He poisoned Palestinian culture by saturating media outlets, school curriculums, sporting events and even summer camps with anti-Israel rhetoric.Arafat convinced his people that it was the right of any Palestinian living anywhere in the world to have a home in Israel. As a result, the aspirations of the Palestinian people today exceed that which is reasonable or possible. In short, Arafat built a society shackled by hatred and fueled by violence.Israelis long for peace, but are skeptical that peace is possible so long as Palestinian children are raised in a society that denigrates Jews and Israelis, denies a Jewish connection with the land and rewards terrorism.In his July 6 testimony to the US House Committee on Foreign Affairs, Yigal Carmon, president and founder of the Middle East Media Research Institute (MEMRI), explained that approximately 10 percent of the PA’s budget is devoted to paying stipends to the families of Palestinian terrorists. The amount paid each month depends on the length of the prisoner’s sentence. A term of up to three years earns $364, while a 30-year term can earn as much as $3,120. A bonus sum is paid to terrorists who either come from Jerusalem or are Israeli citizens.An additional fund exists to compensate the families of “martyrs.”The family of the terrorist who stabbed to death a 13-year-old Israeli- American girl as she slept in her bed is now eligible to receive $350 a month from this fund.The veneration of terrorists is so pervasive that the international Middle East Quartet – the United States, Russia, the European Union and the United Nations – was compelled to address the incitement in its long-awaited July report. The Quartet noted that “Palestinian leaders have not consistently and clearly condemned specific terrorist attacks. And streets, squares, and schools have been named after Palestinians who have committed acts of terrorism.”Driving out of Ramallah, there is a road that runs off the main highway into a valley. Bifurcating that road is a stone monument fashioned into the expanse of land stretching between the Mediterranean Sea and the Dead Sea, presumably reflecting the boundaries that the artist envisions for a future Palestinian state. Etched into the monument is the face of 19-year-old Muhammad Halabi.Last October, Halabi made his way to Jerusalem and stabbed to death Aharon Banita-Bennet, a 22-yearold father who, along with his wife and two-year-old son, was on his way to pray at the Western Wall.Rabbi Nehemia Lavi, a father of seven, heard the commotion and rushed to help. He too was stabbed to death by Halabi.Halabi’s attack helped catalyze the past nine months of stabbings, shootings and car-rammings attacks that have left 33 Israelis and two visiting Americans dead. In Palestinian society, Halabi is a hero. The monument on the side of the highway was erected by the municipality of Surda-Abu Qash, where Halabi lived. Mayor Muhammad Hussein explained that it was “the least we can do for Martyr Halabi.”Arafat has been dead for almost 12 years now, but his legacy is very much alive. So long as it is, the dream of peace will remain a distant illusion.

The author is the senior director of Israel advocacy at Combined Jewish Philanthropies (CJP). From 2013 to 2015, she served as director of speechwriting for Israel’s permanent mission to the United Nations.