Iran has a long-standing hostage strategy with the West - opinion

The theocratic regime premiered its strategy in November 1979 when it seized 52 American diplomats and held them hostage for 444 days.

Robert Malley, the American lead negotiator in the Vienna nuclear talks, created quite a stir when he insisted that Iran’s nuclear agreement is unlikely without the release of United States (US) prisoners. Acknowledging this hostage diplomacy put a spotlight on the long-standing and successful Iranian strategy of imprisoning Western foreigners and dual-nationals to improve its bargaining position.

The theocratic regime premiered its strategy in November 1979 when it seized 52 American diplomats and held them hostage for 444 days to exert pressure on then-President Jimmy Carter, who was considered weak and inept. Fearful of the possible reaction of tough-talking Ronald Reagan, the captive diplomats were released in January 1981. Over time, the regime added a veneer of legality to this crude form of hostage-taking. The Revolutionary Guard Corps (IRGC) added a special unit, the Intelligence Organization (Sazmane Ettellaate Sepah), to ferret out foreign and dual nationals in addition to other enemies and miscreants. The Intelligence Organization had to obtain a detention order from the notorious Islamic Revolutionary Courts (IRCs) or Dadgah-ha-e Enghelab, created on the order of Ayatollah Khomeini in 1979.

Typically, suspects were arrested on trumped-up charges, tortured into confessing and sentenced by the IRCs courts to long prison terms in a highly opaque process. A US State Department report listed the common methods of torture used: “threats of execution and rape, forced tests of virginity and sodomy, sleep deprivation, electroshocks (including genitals), burnings, the use of pressure positions, and severe and repeated beatings.” As a rule, the IRCs impose long prison terms in a highly opaque process. Defendants are denied legal counsel and there are no appeals. In one infamous case, a prisoner was not informed about the charges against him, nor told about the length of his sentence.

ELECTED IN 2005, Mahmoud Ahmadinejad, a hardliner dedicated to pushing the nuclear project, upped the hostage diplomacy. The new president was fortunate because, in 2004, Chief Justice Mahmoud Hashem Shahroudi nominated Ebrahim Raisi, an ultraconservative judicial official, to serve as a First Deputy Chief Justice. The Supreme Judicial Council has recommended judges for the IRCs network. It was hardly coincidental that several of the most extremist judges – Abolghassem Salavati, Mohammad Moghiseh, Yahya Pirabbasi, and Hassan Zareh Dehnavi – were related to the tenure of Raisi, who also served under Shahroudi’s successor Sadeq Larijani. At least 17 Americans and numerous other foreigners were detained on charges of espionage, crimes against national security, and crimes that undermine the Islamic Republic before the end of Ahmadinejad’s tenure. Raisi’s subsequent appointments as Attorney General (2014-2016) and Supreme Court Justice (2019-2021) virtually assured the hardline position of the IRCs.

Despite the election of the relatively moderate Hassan Rouhani in 2013, the use of hostage diplomacy did not cease. Ironically, the regime profited handsomely from the practice. The Obama administration, eager to reach the 2015 nuclear deal known as the Joined Comprehensive Plan of Action (JCPOA), paid the regime a $1.3 billion ransom to release several prisoners. Included in the exchange were Washington Post correspondent Jason Rezaian, Amir Hekmati, a former marine from Michigan, the pastor Saeed Abedini, and Nosratollah Khosravi. 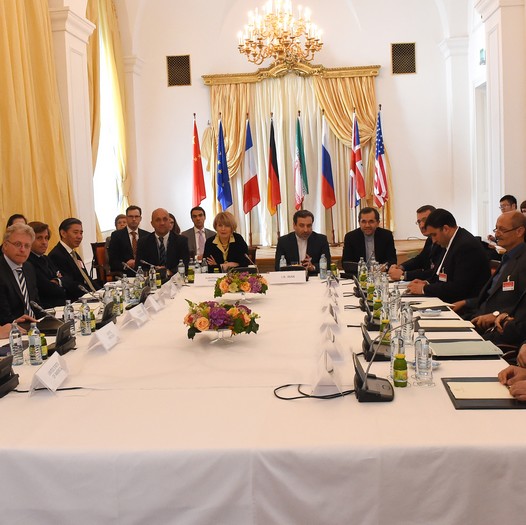 Representatives of EU, US, Britain, France, Russia, Germany, China and Iran meet for another round of the P5+1 powers and Iran talks in Vienna, Austria on June 12, 2015. (credit: AFP PHOTO/JOE KLAMAR)

More to the point, the IRGC was eager to replenish their stock of hostages, especially as Donald Trump, who entered the Republican presidential primary in 2015, promised to withdraw American participation should he win the general election in November 2016. As before, some foreigners, all of whom were accused of spying or undermining the Islamic system, were seized for a possible prisoner swap. Alarmed by the possible détente between the Rouhani administration and the West, the IRGC increased their pace of arrests and sentencing, which reached a crescendo after Trump quit the Joint Comprehensive Plan of Action (the Iran deal) in 2018.

ALTOGETHER, 35 WESTERNERS and dual citizenship holders from a dozen countries, including 9 Americans, were arrested and sentenced to long prison terms. For instance, the Iranian-American businessman Siamak Namazi and Reza “Robin” Shahini were arrested on suspicion of crimes against the Islamic Republic on October 27, 2015, and July 11, 2016, respectively. Wang Xiyue, a doctoral student at Princeton University, was taken into custody in August 2016 and sentenced to 10 years on espionage charges. A dual British-Iranian citizen, Nazanin Zaghari-Ratcliffe, was detained in April 2016. Abdol Rasul Dori Esfahani, a Canadian-Iranian citizen on Rouhani’s nuclear-negotiating team, was arrested in 2016 and given a five-year sentence. Their cases attracted attention in the West and were mentioned by the Trump administration, which denounced the hostage diplomacy in uncertain terms.

Subsequently, few were released, including Wang Xiyue, who was swapped in December 2019 for Masoud Soleimani, imprisoned in the United States for exporting unauthorized biological materials to Iran. The rest are still in prison, including Nazanin Zahgari, whom the regime hopes to exchange for the release of 400 million pounds, a Shah-era debt that the British refused to repay. The German Nahid Taghavi could be swapped for Asadollah Asadi, arrested in Germany on June 10, 2018, for the attempted bombing of a National Council of Resistance of Iran meeting in Paris. The bulk of the hostages may be used to pressure President Joe Biden, eager to reenter the JCPOA and seen as a soft target for coercion in the image of Carter.

Whatever the outcome of the JCPOA negotiations, the issue of hostage diplomacy needs to be widely condemned. Barry Rosen, one of the American embassy captives, had launched a hunger strike in Vienna to demand the release of the prisoners before further talks, a plea that the Biden administration rejected. Some observers have noted that coupling the issues would be difficult, if not impossible.

Still, a broad international campaign that would include the US, the European Union and the United Nations is urgently needed to force the Iran to comply with accepted legal standards. In the absence of such an intervention, the regime will continue to use hostage diplomacy, casting a shadow over the global commitment to human rights.

The writer is a senior research fellow at The Philos Project, where his work focuses on Iran and violations against religious minorities in the Middle East.