Between the British Empire and the Third Reich - opinion

While British imperialism did not call for genocide of the Jews, the abrogation of a Jewish State would have spelled disaster for the Jewish people.

World War II broke out on September 1, 1939, with Nazi Germany’s invasion of Poland. The conflict left Europe in ruins, cost millions of lives, and proved a most crushing blow to the Jews of Europe, unspeakable and unfathomable in scope.

Hours after the invasion, far away from battle, a cargo ship with 1,400 illegal Jewish refuges – the Tiger Hill – ran ashore off Tel Aviv. As the British Mandate authorities trained their searchlights on the ship, the Jews sang “Hatikvah” in defiance.

The British shot three Jews in the operation, all of whom died so the first Jews to die in the war were at the hands of the British, not the Nazis.

Sir Martin Gilbert writes in his 1998 history of Israel, “The Mandate authorities boarded the ship and took the ‘illegals’ to the Sarafand detention camp, on the Tel Aviv to Jerusalem road.”

The saga of the Tiger Hill, while at first glance a footnote in the larger scope of Jewish history, epitomizes the painful predicament of the Jews in the Second World War. While the British were fighting those whom the Germans marked for mass murder, at the same time the fading Empire was obstructing the Zionist settlement of the Land of Israel. The 1939 MacDonald White Paper, known to the Jews of the yishuv as “the Black Paper,” prohibited more than 75,000 Jews from escaping Europe over a period of five years and settling in Eretz Yisrael – the Land of Israel – thereby assuring an Arab majority. 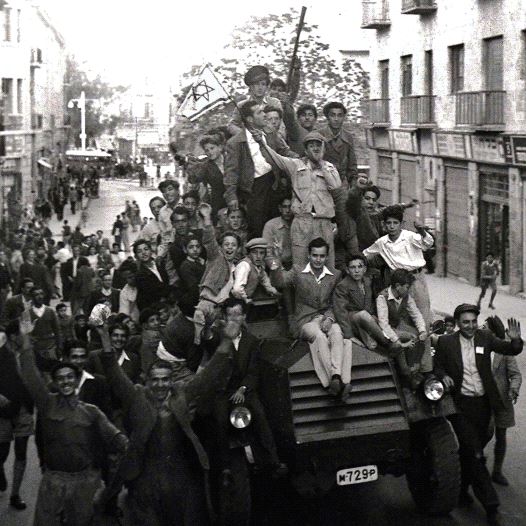 JEWS CROWD onto a British army armored car as they celebrate in downtown Jerusalem the morning after the United Nations voted to partition British mandate Palestine into a Jewish and an Arab state. (credit: REUTERS)

While the Germans were the most urgent enemy to defeat, the British held the Jews hostage in the Third Reich by not allowing them to escape genocide. The Jews of the Yishuv had the painful choice of opposing Britain, even while fighting the Third Reich. David Ben-Gurion, leading the Yishuv, strikingly declared, “We will fight with the British against Hitler as if there were no White Paper; we will fight the White Paper as if there were no war.” While a brilliant summation of Yishuv strategy, Ben-Gurion would soon face the reality that his words would be challenged by some Jews, themselves.

More than 30,000 Jews in the Mandate fought in the British Army in WWII. No doubt, their experience as soldiers readied them for the battles again the Arabs in the War of Independence in 1948. Still, the tension with the British imperialists would not disappear.

The Hagana – the underground Jewish paramilitary organization in the Mandate, representing the established Zionist leadership of the Jewish Agency – set aside operations against the British during most of the war. Defeating the Germans was more important.

Yet, the Hagana organized Mossad le-Aliyah Bet late in 1938 to organize illegal immigration. The underground of the followers of Jabotinsky and Begin – who engaged in anti-British activity during the last years of the war – was also a key to the rescue of Jews from Nazi Europe. And the story of the Tiger Hill is a constant reminder that while British imperialism did not call for genocide of the Jews, the abrogation of a Jewish State would have spelled disaster for the Jewish people.

The writer is rabbi of Congregation Anshei Sholom in West Palm Beach, Florida.