Australia has been a good friend to Israel

Our Jewish community has one of the highest per capita rates of Zionist youth movements that engage with Israel, and of Australians who make aliya. 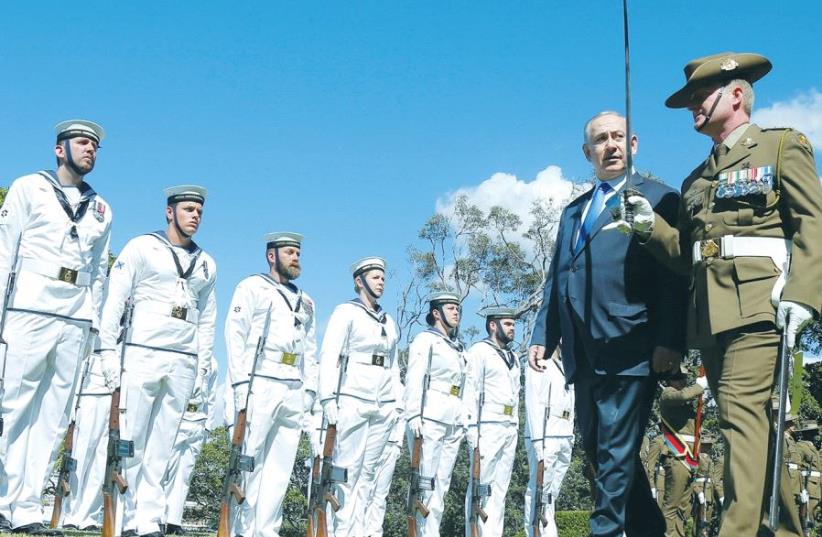 PRIME MINISTER Benjamin Netanyahu reviews an Australian Military Forces honor guard at Admiralty House in Sydney yesterday.
(photo credit: REUTERS)
Advertisement
Australia has been a good friend to Israel since before the establishment of the Jewish state.The friendship has transcended partisan politics, and been enhanced and promoted by successive leaders of both nations.Against this conducive backdrop, last week’s historic first visit by Prime Minister Benjamin Netanyahu and the warm, respectful reception he was given by our own prime minister, Malcolm Turnbull, has surely taken the relationship to a new level.While the Australian Jewish community has long recognized how much Israel has to offer Australia country in terms of innovation and entrepreneurialism, and how much Australia has to offer in return, Mr. Turnbull’s handling of the visit brought these synergies unprecedented mainstream attention.He attended almost every event on the visitor’s schedule.He showed deep respect for our culture, our beliefs and our commitment to the State of Israel.He showed courage in recognizing Israel as a bastion of democracy and human rights, and rebuking the United Nations Security Council for what Mr. Turnbull described as a “one-sided” criticism” in the form of December’s Resolution 2334.And Mr. Turnbull’s framing of Israel’s unique innovation ecosystem, and of the opportunities for collaboration between our two countries, was compelling and personal, related to his first meeting with Benjamin Netanyahu in Israel in 2004.“Whether it was the elaborate water system of Herod’s fortress on Masada or the desalination plant at Ashkelon, whether it was the ancient streets of old Jerusalem or the boardrooms of Tel Aviv, I could see that throughout its history, the greatest natural resource of Israel has been the brilliance and the enterprise of its people.”As both prime ministers affirmed, for Australia, Israel is the Start-Up Nation that inspires.For Israel, Australia is the Innovation Nation, ready to collaborate.Opposition leader Bill Shorten spoke of the “virtuous circle of entrepreneurialism and philosophy – enriching our business, our medicine, our universities, our philanthropy and community.”The key objectives and timeliness of the visit were reflected in editorials in our national newspapers, including one in The Australian headed: “Looking to the future as historic ties are celebrated,” and another in the Australian Financial Review headed: “Netanyahu visit an historic moment for Australia and Israel.”The unmistakable personal chemistry between the two prime ministers, the two men, gave all the more resonance to their shared recognition of the importance of people-to-people links between Australia and Israel.Because innovation doesn’t happen in a vacuum: It happens through collaboration, through individuals thinking and working together to create new ideas and products and solutions.The leaders recognized that the extraordinary potential for this kind of collaboration between Australia and Israel was founded on the efforts, over many decades, of the Jewish community in Australia.Exciting business, investment and employment opportunities across many industries have been created and nurtured through our dynamic Zionist youth movements.Successive trade missions, involving Australian politicians, business people, academics and journalists, have opened people’s eyes to the enormous potential to build on the shared history of our two nations to create a mutually rewarding shared future.As I said in my remarks at the community gathering at Central Synagogue, this shared history stretches back for 100 years to an event we will commemorate on October 31 at the Centenary of the Australian Light Horse Charge at Beersheba. Our strong Australian delegation will be led by Prime Minister Turnbull, quite possibly riding a horse supplied by his Israeli counterpart....Seventy years ago, Australia was the first country to vote for a Jewish state at the United Nations.Fifty-five years ago, Australia was the first country to raise the plight of Soviet Jewry at the United Nations.And some 30 years ago, Australia led the successful campaign to rescind the infamous UN resolution equating Zionism with racism.Of course, our shared national histories are brought to life by personal and family stories.Outside of Israel, Australia has welcomed the largest community, per capita, of Holocaust survivors.Our Jewish community has one of the highest per capita rates of Zionist youth movements that engage with Israel, and of Australians who make aliya.And in my personal story, last week’s historic visit and the honor of representing the Australian Jewish community was one of the most uplifting and emotional experiences of my life.It was a testament to the commitment of the Jewish community that any political differences among us were left to one side as we came together to mark and celebrate the occasion – the culmination of so much hope and effort and planning. And to appreciate our good fortune, in the context of a troubled world, to have a prime minister able and willing to provide precious international leadership.To stand in Central Synagogue and see our community, strong and vibrant and virtually hanging from the rafters to be a part of this moment in time, gifted me a memory and a feeling which is permanently etched into my soul.

Mark Leibler AC is senior partner at Arnold Bloch Leibler and chairman of the Australia Israel and Jewish Affairs Council.
Advertisement
Subscribe for our daily newsletter