It is ironic that the Balfour Declaration has also become the subject of one of the most important observances on the PA calendar. 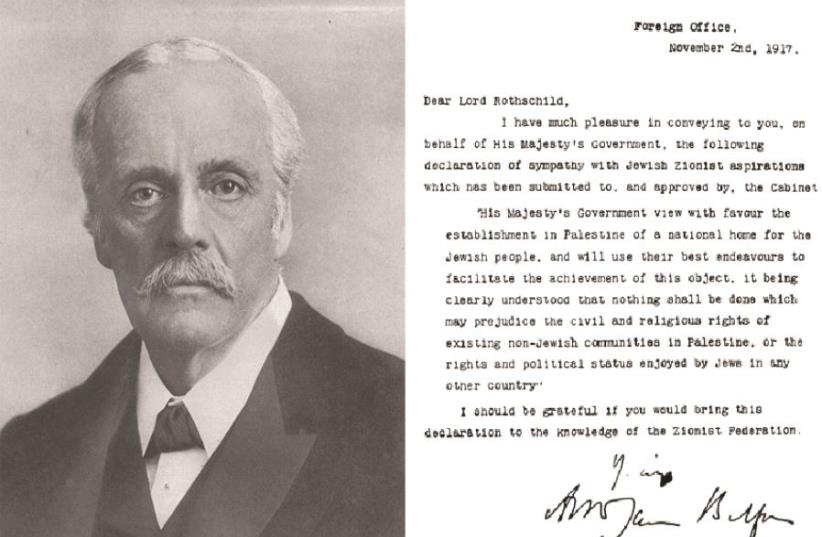 The Balfour Declaration
(photo credit: WIKIPEDIA)
Advertisement
While the Jewish people throughout the world last week celebrated the centennial of the Balfour Declaration, the Palestinian Authority’s demonstrative rejection of the historic milestone shows that our neighbors in the land still refuse to recognize Israel’s existence and casts further doubt on the possibility of ever achieving peace with them.While optimistic Israelis accept the inevitability of peaceful coexistence under the two-states-for-two-peoples formula, unless the Palestinians abandon their rejectionism, there is no possibility of a dialogue that might lead to peace.It is ironic that the Balfour Declaration has also become the subject of one of the most important observances on the PA calendar. Each year, PA schools devote special sessions to discussing it. In 2011 Palestinian schoolchildren were instructed to write the queen of England to condemn “the 94th anniversary of the cursed Balfour promise.” [Official PA daily Al-Hayat al-Jadida, November 3, 2011] While Palestinian revisionism is nothing new regarding the Temple Mount, their denial of the Balfour Declaration’s actual history defies common sense. The support of British Christian Zionists for the return of the Jews to their ancestral homeland dates from the early 19th century. This is a matter of historical record that no deluge of PA propaganda can deny.The first wave of Zionist immigrants joined the existing Jewish community of the Land of Israel starting from czarist Russia in 1882, 35 years before Balfour’s declaration and long before the First Zionist Congress in 1897. It is notable that so far the PA hasn’t tried to deny the existence of the Christian Zionism that led to the declaration, which was strongly supported by Winston Churchill.The Palestinian ideology of rejectionism is founded upon the transparent fiction that a Palestinian nation existed for thousands of years and that there never had been a Jewish Temple in Jerusalem. According to the PA’s delusional narrative, Britain’s support for Zionism was the beginning of Jewish history in the land.The PA would have the world believe that the Balfour Declaration was a precursor of Hitler’s attempt to answer “the Jewish question.” A documentary broadcast on PA and Fatah TV since 2013 explains: “Faced with the Jews’ schemes, Europe could not bear their character traits, monopolies, corruption... The European nations felt that they had suffered a tragedy by providing refuge for the Jews. Later the Jews obtained the Balfour Declaration, and Europe saw it as an ideal solution to get rid of them.”The ominous link between the PA narrative and Nazism should be alarming. In 1998, for example, the official PA daily presented Hitler and Balfour as united in a common goal: “The difference between Hitler and Balfour was simple: The former did not have colonies to send the Jews to so he destroyed them, whereas Balfour... [turned] Palestine into his colony and sent the Jews.“Balfour is Hitler with colonies, while Hitler is Balfour without colonies. They both wanted to get rid of the Jews... Zionism was crucial to the defense of the West’s interests in the region, [by] ridding Europe of the burden of its Jews.” [Al-Hayat al-Jadida, December 6, 1998] In a PA schoolbook just published this August, children learn: “Zionism is defined as a colonialist political movement... the Balfour Promise issued by Britain was a type of solution to get rid of the Jews by allocating to them the land of Palestine.” [Geography of Palestine and Contemporary Modern History, for grade 10] The indoctrination is effective. As a 14-year-old boy told The Jerusalem Post’s Ben Lynfield: “The UK didn’t have the right to give Palestine to anybody... After Balfour, Israeli mafias came and occupied Palestine.”The persistence of Palestinian delusion is mind-boggling: “There is no documentation that the Jews made the Western Wall a place of worship at any time, except after the Balfour Promise,” PA TV broadcast in March of this year.Mahmoud al-Habbash, PA President Mahmoud Abbas’s adviser on religious affairs, stated in Al-Hayat al-Jadida on December 18, 2012: “No person besides Muslims ever used it [the Western Wall] as a place of worship throughout all of history, until the ominous Balfour Declaration in 1917.”Fatah spokesman Osama al-Qawasmi went even further two weeks ago, declaring in the paper the Balfour Declaration “the most horrible crime in the history of mankind.”The truly horrible historic crime is the Palestinians’ ongoing repetition of their deluded denial of Israel’s existence and their refusal to make peace.