Being Jewish and American on 9/11

What were the outcomes of 9/11? America unified in a manner not seen in decades, perhaps since Pearl Harbor. 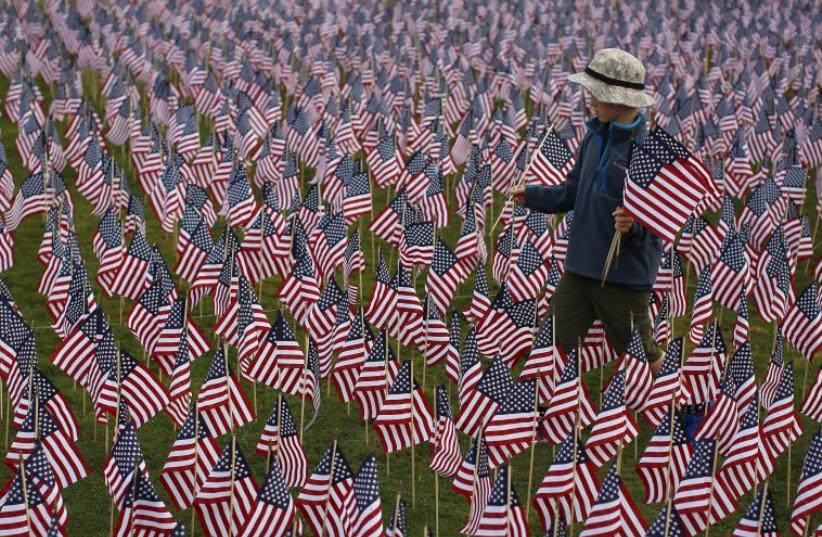 Boy among some of the 3,000 flags placed in memory of lives lost in the September 11, 2001 attacks, at park in Winnetka, Illinois, September 10, 2015.
(photo credit: REUTERS)
Advertisement
The High Holidays around the corner, with their lesson that remembrance and reflection are part of our Jewish DNA. So what is the significance of September 11, 2001, for us as American Jews? Prominently placed on my lapel is a 9/11 pin that I wear while speaking about Israel at community events. It always is a conversation starter. After the talk, unfailingly someone asks, “Why the 9/11 pin?” My answer is that on 9/11, our Christian neighbors and friends finally began to understand what it means to be Jewish and supportive of Israel.Fifteen years ago, terrorism hit home to America. Nearly 3,000 souls taken in one day. America, shaken, woke up and unified against a very real threat of international terrorism. Our non-Jewish next-door neighbors went into military service, police and rescue services, and scores realized that Israel is the bulwark of American defense against a common threat. The daily terrorism victims of Israel at the beginning of this millennium no longer seemed so remote.Remembrance – for example the call to “remember the Exodus from Egypt” – is a common thread of our Jewish heritage and identity. After 15 years, 9/11 is still a cause for Americans to stop, remember, pay homage to the victims, appreciate our American way of life and unfortunately realize that a common threat of radical Islam still exists.What were the outcomes of 9/11? America unified in a manner not seen in decades, perhaps since Pearl Harbor.A paradigm shift occurred in grass roots understanding of Israel’s position in the world.Most in America “get it” about Israel being the sole real democracy in the Middle East and America’s true friend.This understanding excludes those on the radical Left and the anti-Semites taking hold of Europe – and American campuses. Those in league with the Boycott, Divestment and Sanctions (BDS) movement and its “soft terrorism” cannot see Israel in terms other than the failed Communist understandings of colonialism and class war. Listening to the chants on the streets of Europe, and college commons, you can hear the echoes of Yasser Arafat’s and Palestinian Authority President Mahmoud Abbas’s KGB training.A second outcome of 9/11 affected the American Jewish community. A new focus was placed on campus and training young adults, and devoting precious resources to the effort. It saw the creation and development of a score of organizations, like Hasbara Fellowships, StandWithUs, the David Project, the growth of CAMERA, and many other organizations that took it upon themselves to train the next generation of Jewish leadership.On this, the 15th anniversary of 9/11, an effort is being made to cast light on real work for peace in the Middle East. There are Arab Palestinian leaders who know that the only way to peace is economic development, true human rights and building relationships with Israel and America.The message of remembrance this 9/11 is accompanied by focusing on true paths to peace. It also is a reflection and awareness that when terrorism hit America’s shores, in a matter of common defense and understanding, all Americans became Jewish.The author is co-founder of YJLC – Young Jewish Leadership Concepts, a non-profit young professionals network.