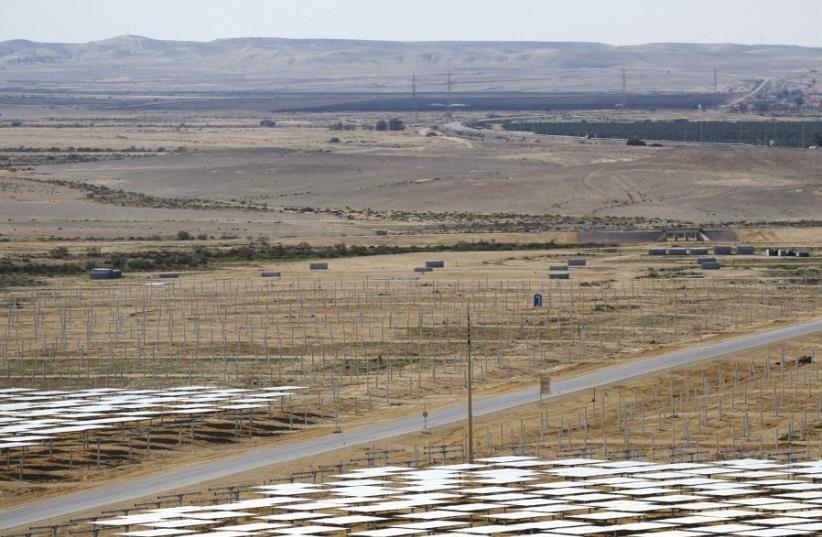 Heliostat mirrors are seen during the construction of a solar-power field in the Negev
(photo credit: REUTERS)
Advertisement
About a decade ago I submitted Israel’s first solar power license application with the hope that this audacious act would launch a green energy revolution for Israel, with ripple effects in Africa, the Middle East and elsewhere. Yet when it comes to green energy policy in Israel, every day is still Purim. We are so intoxicated by natural gas that the state keeps stumbling.This Wednesday, the Knesset Economic Affairs Committee will be holding a hearing on solar power in Israel. Behind the mask of official goals and declarations is a nearly empty energy basket masquerading as a gift to the struggling solar industry and the gullible citizens of Israel. Those who plot energy policy and those who pull the political strings are manipulated by six misguided assumptions to which we, the citizens of the state, should refuse to bow.The first is the most nefarious, which is that solar is more expensive. The calculations of the state, enshrined in the Kendell Report, demonstrate that grid parity – when the price of solar is equal to the price of gas – is in the 40-45 agorot per kilowatt hour range. The truth is that solar is cheaper and is being asked unfairly to subsidize natural gas. It should be the same price as natural gas.The second myth is that solar can’t represent a significant portion of our energy mix and can’t be baseload during the day. From the time the first solar field was interconnected at Kibbutz Ketura in 2011, we have the data to demonstrate that solar is dependable, virtually baseload and can power the entire country during the day. Indeed, 70% of the daytime energy now from Eilat to the Dead Sea is from the sun, and it will reach over 100% by 2020. This should be the model for Israel, with gas power at night or during cloudy days.Third: that Israel is somehow unique and can’t reach meaningful levels of renewables. Yet at least a quarter of the countries on the planet will be powered at least 50% by renewables by 2030 and Israel’s target is only 17%. Israel is unique but only in its lack of vision and leadership.The fourth myth is that the plan being presented in the Knesset will show a clear path to reach 10% of our power generation coming from renewables. But this is fake math. It is one thing to show a target of a little more than 2,000 MW installed coming from green energy by 2020, but the Haman is in the details. Installed capacity needs to be discounted about 20% to reflect the losses of converting direct current to power that the grid can use, so we would need to install closer to 2,500 MW by 2020 to just account for that factor.But it does not take a genius to know that the sun only shines during the day, so to reach 10% of our energy from green sources the country will need closer to 5,000 MW of installed capacity by 2020. (Some wind and biomass may be online by then to reduce that number, but very, very little). We are, therefore, under the current plans, on target to reach only 5% and not 10% of our energy generation from renewables, the lowest of the OECD countries.The fifth myth is that Israel is a fair and democratic country. Millions of dollars were invested by solar developers according to one set of rules; the Israeli Electricity Market Regulatory Authority (reshut hachashmal) is changing the rules mid-game in a way that undermines the groups that created the industry and took the risks.Furthermore, if we are a fair and democratic country, how come all the solar fields are on Jewishly owned land and the Beduin solar proposals have been systematically undermined? The only corrective is a special quota for the Beduin, so all of Israel’s citizens in the south can participate in the solar revolution. And finally, with 30% of Israelis renting their apartments and 70% living in multi-family apartment buildings, most citizens are blocked from participating. Around the world community solar gardens are being set up for all citizens to be part of the solution to climate change.The final myth is that natural gas is the best way to achieve energy independence and represents the largest investment in the Israeli economy. It shows suspension of good judgment that the security- minded State of Israel is putting its trust for most of its power in 200 km. deep-sea pipes in a fault and war zone just at a time when all our power plants are sitting targets for Hezbollah and Hamas missiles. Distributed power plants, large and small, is the best energy security, not explosive and vulnerable big targets. And if Israel would go 100% solar during the day – like in the Arava – then $20 billion will come into our economy, dwarfing the gas investment.It is Purim in the halls of power when it comes to Israel’s energy policy, and it is time to sober up.The author is a founder of the solar industries in Israel, East Africa, West Africa and elsewhere, serves as CEO of Energiya Global Capital and served on the Israeli negotiating team at the Paris Climate Conference. He can be followed @KaptainSunshine.