It was a long and hard-fought victory, bequeathed by one generation to another. 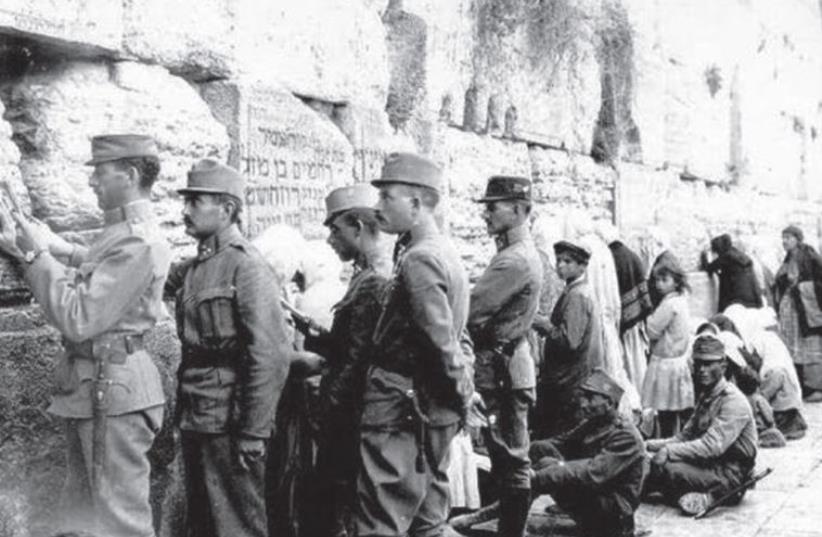 Austrian soldiers at the Western Wall.
(photo credit: Wikimedia Commons)
Advertisement
This week’s cabinet decision creating an area for pluralistic worship adjoining the Western Wall has been hailed by the non-Orthodox community and many in the Orthodox establishment while, as expected, condemned by the ultra-Orthodox.There is debate in the blogosphere as to whether this is an historic event. For religious hard-liners, pluralism at the Kotel is about as antithetical – and heretical – as the Vatican allowing a Protestant chapel to be built in St. Peter’s Square.But for the majority of the world’s Jews who do not identify themselves as Orthodox, this is a pretty historic event. As The Forward editor Jane Eisner commented: “For those pluralistic Jews who don’t fetishize a certain group of ancient stones, who wish to pray in a modern setting with creativity and acceptance, the new plan offers that space. It may be off to the side and smaller than it should be. It may still be prone to bureaucratic infighting and financial shortfalls. But it will be there.”It was a long and hard-fought victory, bequeathed by one generation to another. “We have been fighting for 27 years,” Women of the Wall chairwoman Anat Hoffman told the press on Sunday. “We were single when we started, we are grandmothers now. What we have done is liberate another part of the wall that will be open to all and tolerant and friendly.”Reform and Conservative leaders in America acknowledged it as Israel’s first serious step toward religious plurality.Rabbi Rick Jacobs, president of the Union for Reform Judaism, said that the decision, coming after years of struggle by Woman at the Wall and its supporters, was being received “as an affirmation of the bonds between the Jewish people in Israel and the Diaspora.”Education and Diaspora Affairs Minister Naftali Bennett of Bayit Yehudi, who has been a vocal supporter of an increased non-Orthodox prayer platform at the Kotel, echoed Jacobs by telling The Jerusalem Post that the cabinet decision will open a new page in Israel-Diaspora relations.Beyond the particulars of this decision – how many square meters of egalitarian prayer area will there be, compared to the area of the adjoining Orthodox synagogue – is the very fact that such a religious peace treaty has been achieved. A peace treaty among Jews? Some might suggest that if such a thing is possible, a peace agreement between Jews and Arabs must also be possible.Despite the victory, the question remains if the worship decision is an aberration or will be recorded as the first in a number of enlightened reforms in Israel’s religious practice.There are many more steps to follow if Israel is ever to realize the promise of equality in its Declaration of Independence.There are already signs of countermoves by the ultra-Orthodox.For example, Religious Services Minister David Azoulay of Shas has refused to cover the agreement’s costs from his budget, as have three other ministers. In the coalition tradition of making religion into politics, by those whose religion is politics, such maneuvering reminds us of the imperative to separate religion and state for a state that is the only democracy in the Middle East.As Stanley P. Gold and Uri Regev write in the Forward: “The Israeli government has been sending conflicting messages regarding the status of the non-Orthodox streams in Israel – one for external consumption, abroad, and one for domestic Israeli policy. When Netanyahu speaks with Diaspora Jewish leaders, he voices his support for pluralism, while the persistent discrimination and denial of key religious freedoms and equality within Israel continues to degrade.”They outline some of the roadblocks on the road to religious reform: the “tyranny” of the Chief Rabbinate over marriage and divorce, denying thousands of citizens the right to family, denying women their right to equality and dignity; the rabbinate’s rejection of modern-Orthodox conversions, not to mention any non-Orthodox alternatives; the freezing of funds for pluralistic education; the non-employment of women on religious councils. Related is the recent watering down of a law designed to share the burden of military service by drafting haredi yeshiva students.But establishing pluralistic worship at the Western Wall shows that coordinated efforts between Diaspora and local activists can influence Israel’s policy-makers and be an effective tool for change.