One could easily get the impression from Kerry that Israel, not Iran, is the big threat to Middle East stability. 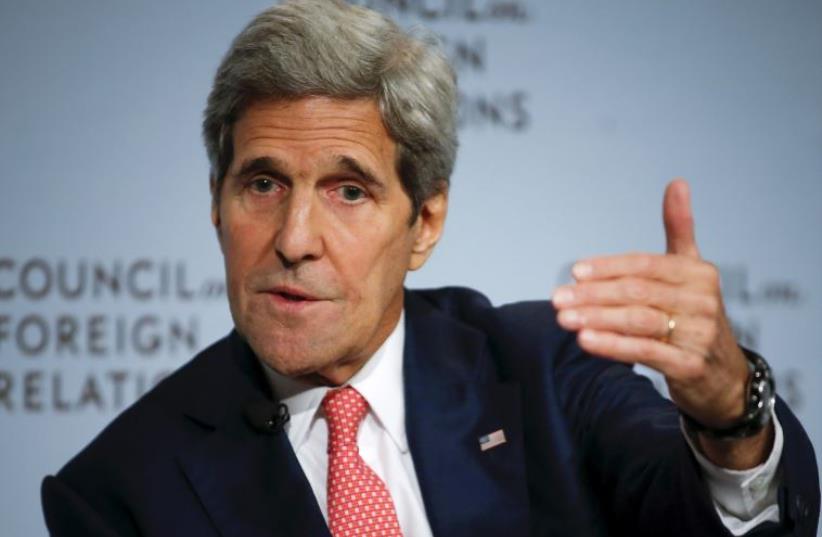 US Secretary of State John F. Kerry speaks to the audience as he discusses the Iran nuclear deal in New York
(photo credit: REUTERS)
Advertisement
Iran is run by fundamentalist, apocalyptic mullahs who have no qualms about using violence to promote their expansionist designs throughout the Middle East, from Syria and Lebanon to Iraq and Yemen. The regime persecutes its own people, dealing out death sentences to homosexuals, oppressing religious minorities such as the Baha’is and incarcerating journalists, including Washington Post reporter Jason Rezaian.US President Barack Obama openly admits that the Islamic Republic is anti-Semitic and promotes terrorism around the world. He is well aware that Iran’s leaders regularly call for the destruction of the US and Israel. One of them is Qassem Suleimani, head of the Quds Force, the Revolutionary Guards expeditionary unit, who is responsible for exporting Iranian terrorism and training Shi’ite forces that killed US military personnel in Iraq. Another is Supreme Leader Grand Ayatollah Ali Khamenei, who during a recent rally in Tehran again praised his people for calling for the demise of the US and Israel.Yet it is Israel that US Secretary of State John Kerry is threatening, for daring to try to protect itself from the existential threat presented by the Islamic Republic’s warmongering leaders.In two appearances last week, he warned Israel that it would be blamed if it dared to act against Iran.On NBC’s Today show, Kerry said that an Israeli attack on Iran’s nuclear facilities would be an “enormous mistake.”“If they bombed them, sure, I presume Iran would then have a reason to say, ‘Well, this is why we need a bomb,’” he said.Speaking to the Council on Foreign Relations, Kerry said Israel’s international isolation would increase should the US Congress reject the nuclear deal.“I fear that what could happen is if Congress were to overturn it, our friends in Israel could actually wind up being more isolated and more blamed, and we would lose Europe and China and Russia with respect to whatever military action we might have to take, because we will have turned our backs on a very legitimate program that allows us to put their program to the test over these next years,” Kerry said.One could easily get the impression from Kerry that Israel, not Iran, is the big threat to Middle East stability.But the reality is that the Jews have learned the hard way that when dictatorships inspired by violent, anti-Semitic ideologies issue threats, it is unwise to ignore them.Kerry has it all wrong when he says an Israeli military strike would provide Tehran with an excuse to build nuclear bombs. It is Iranian leaders’ religiously inspired ideology of expansion and aggression that dictates Iran’s nuclear weapons program, and it has for the past three decades.And if Congress decides – persuaded by arguments presented by, among others, pro-Israel lobbyists – that it is in the US’s interest to maintain sanctions on the Iranian regime as long it continues to support terrorism and vows to destroy the US, that would be perfectly legitimate and understandable – more understandable than granting far-reaching concessions to such a regime.Blaming Israel for trying to break up the US’s coalition with Europe, China and Russia is a distortion of reality that transforms the victim of Iranian aggression into the villain. If the US cannot agree with Europe, China and Russia on how to deal with the Iranian threat it will be because the different countries view the Iranian threat differently, not because of Israeli meddling.Kerry’s comment regarding the dangers of a congressional vote against the nuclear deal also seems to be a nod to borderline anti-Semitic conspiracy theories that “the Jewish lobby” controls Washington and has the power to force the US to pursue a policy that is against American interests.President Barack Obama seemed to be arguing in a similar fashion when, during an appearance on The Daily Show with Jon Stewart, he said he hopes the American public would respond positively to the nuclear deal with Iran.“If people are engaged, eventually the political system responds,” said Obama. “Despite the money, despite the lobbyists, it still responds.”What money and which lobbyists was Obama referring to? Could it be the Jewish variety? The Obama administration seems so intent on forcing a nuclear arms deal that it is willing to resort to fear mongering and smear tactics against its closest allies, while all but ignoring the crimes of Iran, a country led by men who have never ceased to make it clear which side they are on.