Bringing together Jews and Muslims at a vandalized cemetery

Our nation faces a real crisis of neighbors becoming strangers. We know more about world events but less about each other. 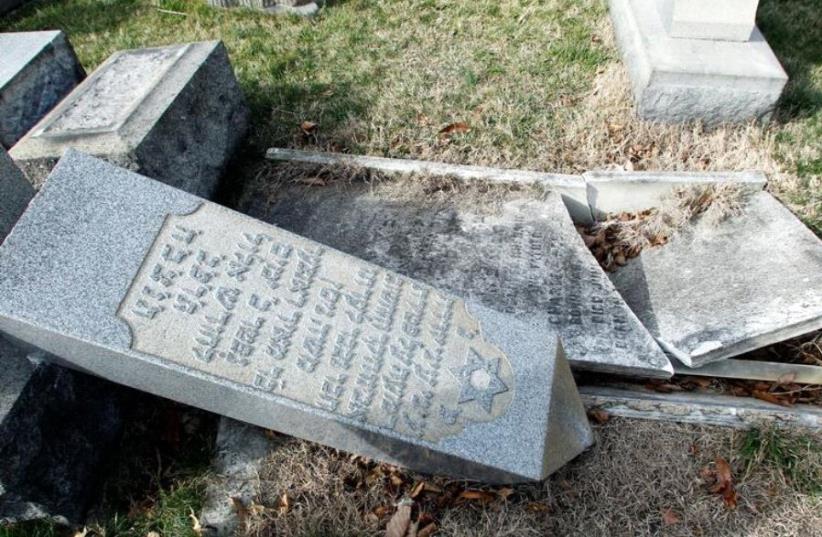 A headstone, pushed off its base by vandals, lays on the ground near a smashed tomb in the Mount Carmel Cemetery, a Jewish cemetery, in Philadelphia, Pennsylvania, U.S. February 27, 2017
(photo credit: REUTERS)
Advertisement
A Jewish cemetery vandalized in St. Louis, swastikas show up in a New York City subway, over 100 tombstones damaged at a Jewish cemetery in Philadelphia. This, unfortunately, is my America. But over $100,000 was raised for the St.Louis cemetery, strangers united and cleaned up the swastikas and a dozen Ahmadi Muslims volunteered at the Philadelphia cemetery to show solidarity and support. This, too, is my America. It is this America that restores my faith in humanity nearly everyday.Our nation faces a real crisis of neighbors becoming strangers. We know more about world events but less about each other. Pew reports that 62% of Americans don’t know a Muslim and 39% don’t know a Jewish person.This ignorance results in not caring for the other’s humanity, hating the other and ultimately committing acts of violence against the other.Muslims and Jews are a supreme minority in America. Although our numbers are single-digit percentages of the greater US population (1% is Muslim, 2% Jewish), people still know about us. Unfortunately, because many do not know Muslims or Jews, they tend to end up believing in outlandish stereotypes.This is why the Ahmadiyya Muslim Community USA launched the True Islam educational campaign last year. Islamophobia was on the rise and Muslims hesitated in opening mosque doors to all. However, the Khalifa of Islam, His Holiness Mirza Masroor Ahmad, stated that Muslims have nothing to hide and so mosques are open to all. Thus, mosque doors were opened wider than ever before. If everyone is able to meet a Muslim, then we can reduce the ignorance and hate. People are not only meeting Muslims in weekly gatherings called “Coffee, Cake, and True Islam,” but are also meeting each other, be they Jewish, Hindu, Atheist, Humanist or Christian, and learning about each other.This is crucial to understand because Mirza Ghulam Ahmad, the Messiah, revived Islam by promulgating its true teachings. Islam is a religion promoting the freedom of conscience. In the cemeteries and subway, we see that this freedom was attacked. This is why Ahmadi Muslims came to stand in solidarity with members of the Jewish community. An attack on one faith is an attack on all faiths.At the cemetery in Philadelphia, we met with members of the Jewish community, rabbis and leaders. The handshakes and hugs between two persecuted communities were emotionally overwhelming. The teachings of these two faiths are so similar that when I attended my first Shabbat dinner last Friday and read through the Shabbat prayers, it felt like I was reading an Islamic prayer book. Let it be clear, Muslims and Jews have no war with each other.There may be political skirmishes here or there, but those are just that, political. They are not based on either religion’s true teachings.But to ensure we create lasting success we must ensure we engage in lasting dialogue. One major mosque visit or one hearty Shabbat dinner is about as useful as one sunny day for a seedling.It’ll provide temporary warmth, but won’t alone overcome the ongoing onslaught of antisemitism and Islamophobia.Just as a seedling requires ongoing nourishment, water and sunlight, so too do Americans of all faiths and backgrounds. We need to keep our doors open, show kindness to our neighbors, and embrace each other.The spike in intolerance against America’s supreme religious minorities has brought our hearts closer together. And as the saying goes, God is closest to those with broken hearts.Let’s take advantage of this closeness and continue to support one another through these bad times.We needn’t wait for the good times, we need to work together to create them.The author is national spokesperson for the Ahmadiyya Muslim Community, USA.