It was difficult to miss the glee with which some people, particularly those with a left-wing agenda, jumped to the conclusion that B’Tselem’s offices were set on fire by far-right activists. 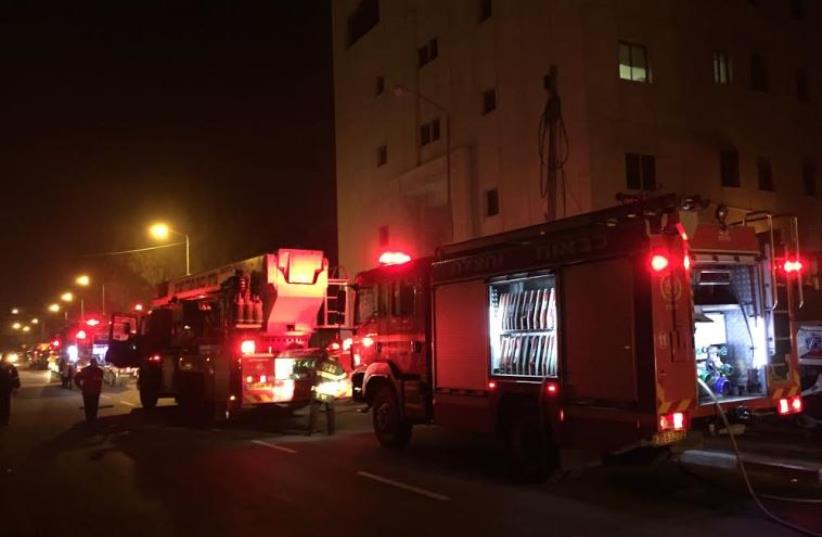 Fire at B'Tselem building Jerusalem, January 10, 2016
(photo credit: BERNARD BOUHADANA)
Advertisement
A fire broke out on Sunday night at the offices of B’Tselem, an organization that, in its words, “endeavors to document and educate the Israeli public and policymakers about human rights violations in the occupied territories.” Thankfully, no one was seriously hurt, although a few people working on other floors in the building housing B’Tselem’s offices were evacuated.Despite initial inaccurate reports that it was an act of arson, it was determined on Monday that the fire was the result of an electrical short circuit. It was difficult to miss the glee with which some people, particularly those with a left-wing agenda, jumped to the conclusion that B’Tselem’s offices were set on fire by far-right activists and was the product of government-sponsored incitement.For instance, Ha’aretz lead its Monday edition with a story entitled, “Arson suspected in fire at human rights group B’Tselem’s Jerusalem office.” In contrast, The Jerusalem Post ran a less sensational front-page story titled “Fire rages through Jerusalem offices of B’Tselem.”Meanwhile, B’Tselem, after a compulsory throat-clearing to allow for the possibility that the fire was not caused deliberately, went on to say in a statement, “However, if it is discovered that this was an arson attack, it must be seen in the context of the wave of government incitement and smear campaigns against Israel’s human rights groups and B’Tselem in particular.”In defending himself against opposition attacks over the security situation on Monday, Prime Minister Benjamin Netanyahu quipped that, “they’ll soon be blaming me for the blaze at B’Tselem.”The B’Tselem false alarm revealed the unbearable ease with which certain segments of Israeli society jump to conclusions about other segments. Precisely what “government incitement” was B’Tselem referring to? Perhaps it was a bill sponsored by Justice Minister Ayelet Shaked and passed last month by the Ministerial Committee on Legislation that seeks to increase the transparency of NGOs like B’Tselem that receive large portions of their budgets from foreign government bodies.Yet, Shaked’s bill does not single out left-wing NGOs.All NGOs that receive funding from foreign government entities would be obliged to register as such. It just so happens that the only political advocacy NGOs that do receive so much foreign funding are left-wing.Also, the new legislation takes the need for disclosure to the next level, demanding that NGOs not only report their financial support, as is currently demanded by legislation passed in 2011, but also make it known during public sessions. For example, if Shaked’s law passes, NGOs with foreign government funding would need to register as such in the official protocol of any Knesset debate, committee or event before participating.How precisely can this be considered incitement? Just as the Left should refrain from hyperboles and jumping to conclusions about the Right, so too should right-wing Israelis eschew wild generalizations about the Left.True, B’Tselem has received some bad press recently.Channel 2’s investigative reporting program Uvda documented how an activist with B’Tselem seemed to conspire with the Palestinian Authority’s security forces to find Palestinians who sell land to Jewish settlers. He did this knowing that the Palestinian security forces would probably torture and even kill the land seller.Still, it would be unfair to besmirch an entire organization due to the despicable behavior of one B’Tselem activist. Undoubtedly, most B’Tselem supporters seek to hold Israeli institutions like the IDF and the justice system to the highest standards out of a sincere desire to strengthen Israel’s democracy, protect human rights and ultimately to make Israel a better place to live.Israeli society is incredibly splintered. There are few, if any, political principles that rest on a broad consensus.From settlements in Judea and Samaria, to the peace process, to the Law of Return, to the integration of the Arab minority, nearly every aspect of Israeli policy is constantly debated. This is part of the beauty of Israeli society. But it can also be polarizing if we allow ourselves to demonize those who think differently from ourselves.The zeal with which some rushed to accuse the Right is a product of such polarization. We must learn to disagree with the other without losing sight of his or her humanity.