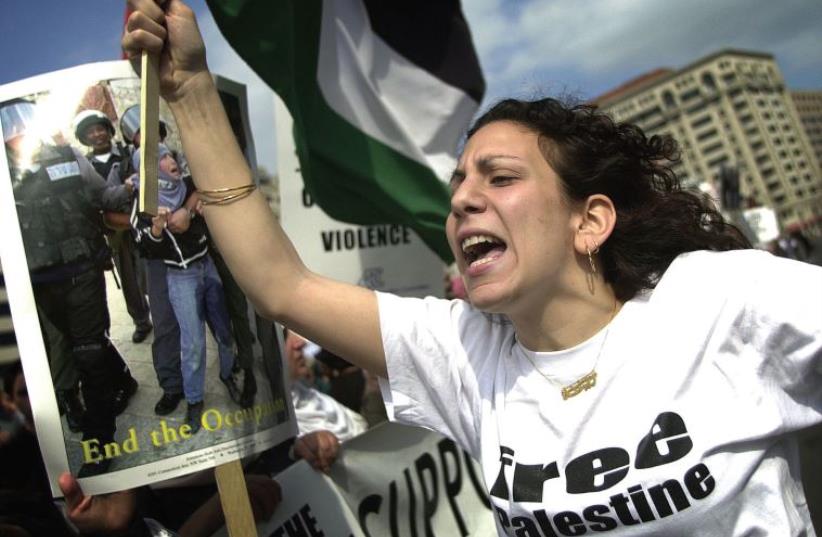 Zeina Ashrawi, of the Students for Justice in Palestine Society of George Mason University, participates in an anti-Israel rally in Washington, DC
(photo credit: JIM WATSON / AFP)
Advertisement
How does the anti-Zionist Students for Justice in Palestine (SJP) that traffics in anti-Semitic boycott advocacy, become so popular on US college campuses? Until recently, my talks on campus were a mixture of Middle East history, Iranian nuclear proliferation, the Israeli- Palestinian conflict, with a smattering of warnings about the growing boycott movement. This year and last, almost all of the invitations to speak were from students and parents desperately trying to understand and combat the intimidation of Jewish students by the boycott movement, while college administrators ignore the growing anti-Semitism on many campuses.Why are SJP’s hateful message and its efforts to deny other people’s free speech by disrupting events not abhorrent to academics, or journalistic elites in mainstream media? Last year I accidentally stumbled into an SJP strategy session before I was to speak at a college campus, and heard them considering their options of whether to shout me down or just ask hostile questions.When did anti-Semitism under the cover of anti-Zionism become acceptable on the American campus, while all other minority or marginalized groups receive the extra protection of “safe spaces” from politically incorrect “micro-aggressions”? There is a perfect storm on the 21st century campus. The far Left’s cultural relativism and moral equivalence have coalesced and joined the ascendancy of the anti-Israel advocacy within academia.Hypocrisy abounds, as progressive professors protected by their free speech and tenure willingly collaborate with groups whose misogyny and human rights abuses they should find sickening. They rationalize that suppressing another’s free speech is itself a form of free speech, as long as it is directed only at Jews who want to defend Israel’s right to exist.The creation and funding of anti-Zionist advocacy began in the Seventies with the oil largesse of Wahhabi Gulf States, which purchased the advocacy of our best universities by endowing what are now the lopsidedly anti-Israel Middle East studies departments. Our children live in a toxic academic environment where challenging the conventional wisdom of Palestinian victimhood could get you a D- or the loss of your “Facebook friends” for being politically incorrect.Jonathan Schanzer of the Foundation for Defense of Democracies (FDD) exposed the true nature of SJP and its associations in April and May of this year. He testified before Congress about SJP funding and its associations before the House Foreign Affairs Subcommittee on Terrorism, and the Subcommittee on the Middle East and North Africa. Schanzer previously served as a terrorism finance analyst for the Department of the Treasury.Schanzer found that Berkeley professor Hatem Bazian, one of the founders of SJP, has had strong associations with Hamas and Muslim Brotherhood front organizations in America.According to Caroline Glick, “Bazian formed American Muslims for Palestine (AMP), whose leadership held key positions at the Holy Land Foundation, KindHearts, and the Islamic Association for Palestine. These groups and their employees transferred millions of dollars to al-Qaida, Hamas, and Islamic Jihad.Although Schanzer could find no indication that AMP is continuing its predecessor’s practice of sending funds to foreign terrorist groups, he demonstrated how the heir of Hamas-USA now directs the BDS movement. Through AMP, they control SJP.”Schanzer said, “AMP is... a leading driver of the BDS campaign (and) arguably the most important sponsor and organizer for Students for Justice in Palestine, which is the most visible arm of the BDS campaign on campuses in the United States.”These are groups you should not associate yourself with if you claim to be pro-Israel, even if you believe settlements over the Green Line are a primary cause of the conflict. SJP is not about two states for two peoples.From their co-founder Omar Bargouti on down, they are against the State of Israel’s existence. The claim that giving a stage to every anti-Israel opinion will lead to a true dialogue and somehow produce a constructive path to end the conflict defies logic.This is not about criticizing critics of Israel or about the two-state solution; this is about giving a platform to those who want you gone or dead Perhaps none of this should be a surprise.BDS supporters now sit on the mainstream Democratic Party platform committee, nominated by Israel’s harsh critic Bernie Sanders, the false messiah of millennials, brainwashed with politically correct advocacy education from our institutions of higher learning. In 2014 Cornell West wrote that the crimes of Hamas “pale in the face of the US supported Israeli slaughters of innocent civilians.”The tide is turning against Israel within one segment of a mainstream American political party, while radical hate groups poison the minds of college students. For far too long too many mainstream Jewish organizations have only paid lip service to the growing BDS threat, or minimized its potential impact. Nothing could be more dangerous.It’s time for pro-Israel organizations to actually work together to effectively oppose BDS on American campuses.And it’s time for pro-Israel Jewish philanthropists to threaten to withhold financial support of universities that foster an atmosphere of intolerance and intimidation for Jewish students who identify with and advocate for Israel.The author is the director of MEPIN™. He regularly briefs members of Congress, their foreign policy advisers, members of the Knesset, and journalists.