Can Israel and Palestine learn from Colombia?

The bottom line is that the road is twisted and belabored, full of fresh trauma and setbacks. 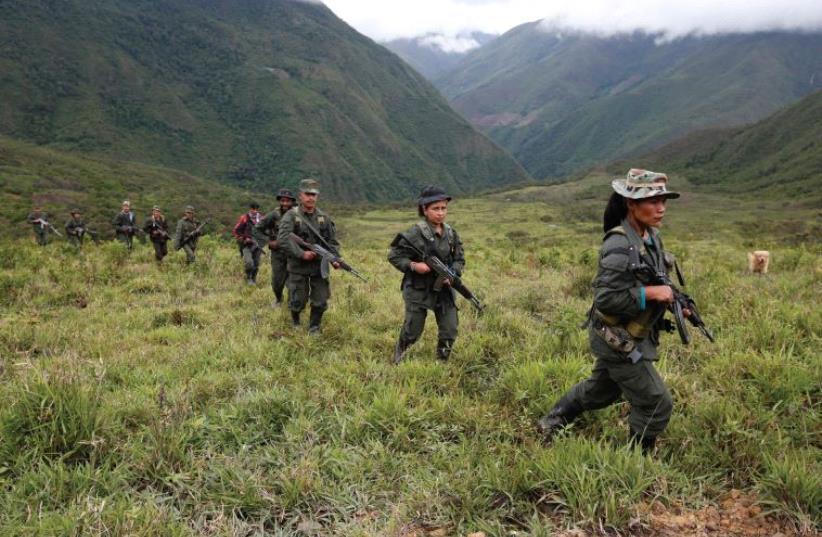 WILL ALL this be over now? Members of the 51st Front of the Revolutionary Armed Forces of Colombia (FARC) patrol in the remote mountains of Colombia, last month
(photo credit: REUTERS)
Advertisement
It is rare to hear any good news about conflicts de-escalating. This week, the world rallied around the implementation of a cease-fire between the notorious and shadowy FARC (Revolutionary Armed Forces of Colombia) and the Colombia government.The conflict has dragged on for over 50 years.The most obvious and optimistic point is that a long and bloody past need not be the future forever. But other useful points are emerging for comparison and maybe inspiration.The 50-year club Like Colombia, Cyprus has been divided since 1974, and locked in an angry, sometimes violent political struggle since 1963. Cyprus is currently engaged in the first negotiation process to generate some expectation of success since the failure to ratify the Annan Plan in 2004. If Cyprus should also see a breakthrough, perhaps a measure of hope could break through another 50-year wall: the Israeli/ Palestinian conflict, dating back to 1967.No short cuts or catharsis This week’s cease-fire did not occur ex nihilo.Negotiations between the government and FARC had dragged on for five years, with rounds of cease-fires, violations, escalations and renewed attempts. The Norwegian think tank NOREF observed that limited goals of ending the war probably helped this round relative to more comprehensive earlier negotiations that failed. But finally, in June 2015, FARC declared a unilateral cease-fire that lasted the year, until the formal agreement was signed in June and completed this week. It is valuable to note then that the sides saw the process through to fruition despite ongoing violence and the backlash this surely generated.No (good) partner The FARC has agreed to end its military campaign and join the legal political process, reported CNN. This is a reminder that when it comes to undesirable partners, even brutally violent ones, there are few options.Either they magically disappear (rare) or they join political mechanisms and state institutions – the more common models seen in both Northern Ireland and in Kosovo, as well as in Palestine (with the PLO) and Israel’s own pre-state fighting forces. With a quarter of a million people dead through the course of the conflict and millions more displaced, accepting FARC into political life will be no small task. The Economist cites a local expression, “swallowing toads,” to describe how this will feel for Colombians.To offset the resistance to integrating FARC, two mechanisms are to be established: a tribunal and restrictions on their activity; and disarmament. This formulation shows that militant groups can also agree to concessions when the process is ripe.The public mattersThe agreement will now be put to a referendum on October 2. It will be a critical test. The Economist breezily reports that polls predict a two-to-one victory for a “yes” vote, but this optimism seems unwarranted, with significant conflicting data available. The most worrying findings are from particularly credible institute: reports say that IPSOS polling shows 50 percent against the agreement, and just 39% in favor. Worse, this data is a reversal from just months before – showing that trends are unstable and support may be falling. A Washington advocacy group on Latin America gathered several polls showing the precipitous drop in support between June and August, and concluded, “The possibility that a ‘No’ vote could undo the entire peace effort is too great to be dismissed.”Colombia is about to face a bitter internal political struggle. The incumbent leader who negotiated the deal, Juan Manuel Santos, is facing crisis-level ratings – roughly 25% popularity.A former president is the incumbent’s main political rival and the primary leader of opposition to the agreement for the referendum vote. His favorability ratings are roughly double those of Santos, according to reports on the IPSOS poll. But as Quintin Oliver, a leader of Northern Ireland’s “Yes” campaign for the Good Friday agreements in 1998 pointed out, the latter will face major lack of social support for his position: “No NGOs, no artists, no celebrities, no sports stars, no obvious business community backing.”Peaceniks matter With or without a referendum, public legitimacy is essential for such controversial agreements under such delicate political circumstances. Oliver’s point is that civil society actors can provide an essential boost for an agreement. In Colombia, if available, support from actors outside politics could shore up what the president is lacking. In Cyprus in 2004, civil society in the north helped rally a strong majority vote in favor of the Annan Plan (a valuable lesson despite rejection in the south).In Israel and Palestine, this key role for civil society is also a reminder that the hardship of pro-peace activity, from daily despair to anti-normalization and outright political attacks, are not in vain. Peace is a long and frustrating game but at the key moment, an infrastructure of support can make a difference. Perhaps even the sophisticated advertising campaign that began a decade ago encouraging de-commissioning of FARC soldiers (described in a remarkable episode of This American Life), contributed slowly to the current process as well. That was government led – a sort of reverse hasbara (public diplomacy).The bottom line is that the road is twisted and belabored, full of fresh trauma and setbacks. Long-term efforts for peace by the government, peace advocates and other social figures may seem futile for years.That is, until the moment of potential – when all hands are needed in the push for peace.The author is a Policy Fellow at the Mitvim Institute. She is also a public opinion expert and an international political and strategic consultant, and an adjunct lecturer at Tel Aviv University. She recently published a article titled “The curse of stagnation and the need for conflict comparisons: Seeking a breakthrough towards Israeli-Palestinian conflict resolution.”