Can Israel continue to keep its distance from the Syria chaos?

The increased tempo of Israeli attacks against Assad regime targets mark a more assertive, and overt, Syria policy on behalf of Israel. 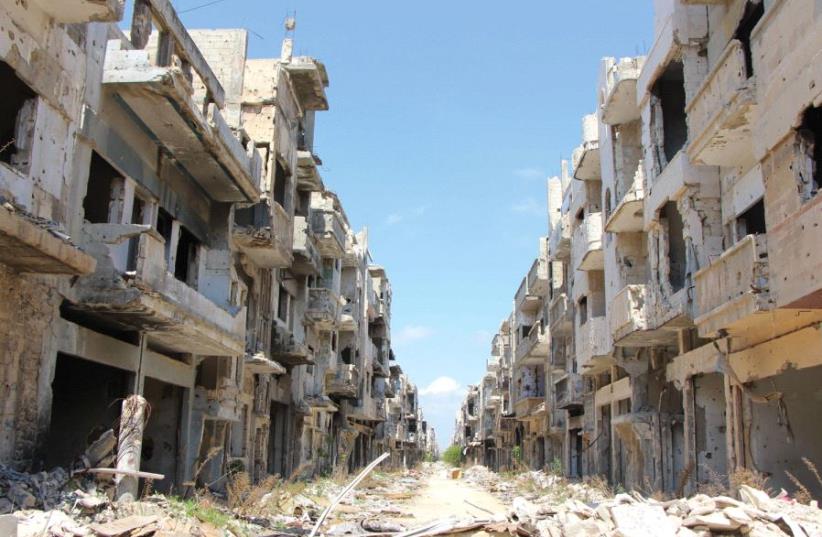 Homs, Syria
(photo credit: JONATHAN SPYER)
Advertisement
Since the start of the Syrian Civil War in March 2011, Israel's policy has been one of non-intervention in the war raging across its northern border: at the least from an official policy perspective, Israel viewed the ongoing fighting in Syria as an internal Syrian affair and sought to keep its distance from the dynamics of rebel fighting and Assad regime offensives. As a result of this policy, unlike many regional and global players – including the United States and Russia – Israel managed to stay out of the Syrian War. Given the tragic human toll inflicted by the war and the permanent damages done to the country – according to the Syrian Observatory for Human Rights, about 465,000 people have been killed and gone missing in Syria's civil war by March 2017 – Israel's non-involvement in the Syrian chaos is no small feat.Until the past year, Israeli strikes in Syria were relatively rare and limited to clearly defined red lines: cases in which "game-changing" weapons were transferred from the Syrian regime or its Iranian patron to Hezbollah, or in instances when fire from across the Syrian border spilled over to Israel. Former Defense Minister Moshe Ya’alon, who was in charge of Israel's Syria policy between 2013 and 2016, commented on this policy by saying that Israel is not “interfering in the Syrian civil war, but we’ve warned what our interests are, and we have called it ‘red lines,’ whether it’s transferring quality weapons to a terrorist organization or violating our sovereignty along the border.”But despite Israel's expressed desire to stay out of the war, intentions by Iran to expand its influence in southern Syria through the activity of its Revolutionary Guards Corps (IRGC) and increasing cross-border spillover mortar fire across the Israeli border during recent months threaten to suck Israel more fully into the Syrian war. These developments reflect changes in the dynamics of the Syrian war in the past year: while only two years ago the Assad regime seemed on the verge of defeat, the Russian intervention in Syria in September 2015 and continued Iranian support have strengthened the regime and emboldened Assad. As a result, Israel's main concern in the past year has shifted from spillover of fighting between the Assad regime and rebel forces to Iranian presence and control in southern Syria.The IDF's stated position remains the same as since the beginning of the Syrian war: an IDF spokeswoman recently said that "the IDF is not a side to and is not involved in the internal Syrian fighting." However, the changed dynamics on the ground have forced Israel to take a more assertive position in response to new threats. This position consists of two aspects: increased strikes against targets within Syria, including regime assets, while at the same time holding the Assad regime responsible for any escalation across the border. Stressing this position, Defense Minister Avigdor Liberman said after a day of cross-border fire with Syria that “the Assad regime, from our perspective, is responsible for what occurs in its territory, and it will continue to bear the consequences of such events.” The increased tempo of Israeli attacks against Assad regime targets mark a more assertive, and overt, Israeli policy towards the Syrian war. Strikes against the Assad regime seek to contain any future expansion by regime forces and IRGC elements in southern Syria, while holding Assad accountable for any cross-border fire aims to prevent any future escalation. The key question now, however, is whether these measures are enough to contain the fighting from spilling across the border – and to keep Israel from sliding more fully into the Syrian War.

Adam Hoffman is a Research Associate at The Forum for Regional Thinking and a Lecturer at the Rothberg International School of the Hebrew University. His research focuses on violent non-state actors and salafi-jihadi ideology.