Can the president pardon himself?

James Madison wrote in The Federalist Papers that no person “is allowed to be a judge in his own case.” 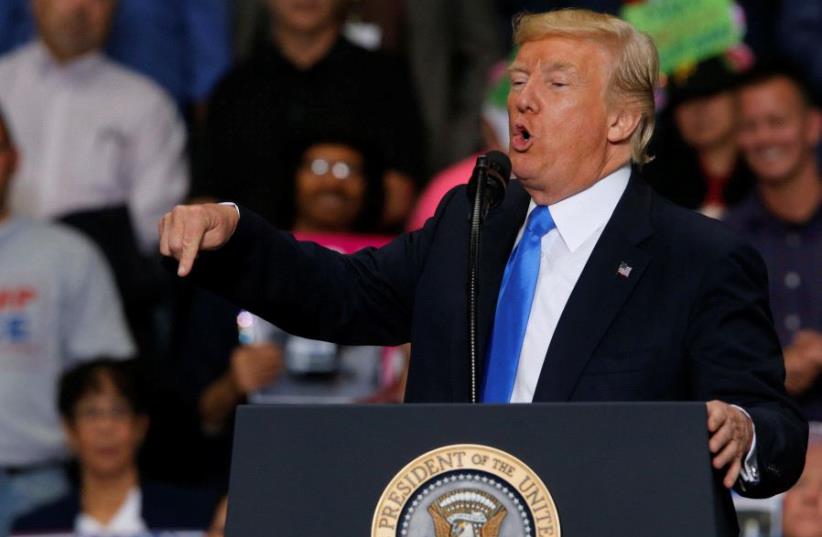 US President Donald Trump holds a rally with supporters in an arena in Youngstown, Ohio, US July 25, 2017.
(photo credit: REUTERS)
Advertisement
US President Donald Trump’s tweets about his broad power to pardon have raised the ultimate question: can the president pardon himself? The answer is crystal clear, and anyone who gives you a different answer is misleading you, because there is only one correct answer. Here it is: nobody knows.No president has ever tried it. No court has ever ruled on it. The framers of our Constitution never opined on it. History provides no guidance. There is a clean slate.Yet pundits and academic know-it-alls will express certainty on both sides of this issue. That’s what pundits and academics do. Rarely do they acknowledge they don’t know, because as experts they are supposed to know. But this is one question whose answer they cannot know.They will have opinions, as we all do. But many will deliberately confuse the is with the ought. If they would like the answer to be no, they will pretend the answer is no. If they would like the answer to be yes, they will pretend it is yes. That’s the way some pundits and academics advocate: by claiming to be describing what they are not so subtly prescribing.This has been the case especially with regard to Trump. Too many academics have said that non-criminal conduct by Trump and his administration is a crime, when they wish it were a crime, so that Trump can be removed from office. But wishful thinking is not a substitute for rigorous analysis, which has been sorely lacking among some of my fellow liberal academics.So let’s rigorously analyze the question of whether a president can pardon himself.The preliminary question is whether a sitting president can be indicted, tried and/or convicted for an alleged crime committed before he assumed office or while serving in office. The answer to that question probably is no, as most authorities suggest. That has been the Justice Department’s view for some time now. It is also the view of most experts that once a president leaves office – by his term ending or by impeachment or resignation – he can be prosecuted.If that were the case, there would be no reason for the president to even consider pardoning himself now. He could wait until his last day in office. Why the last day? Because if he can be prosecuted as soon as he leaves office, pardoning himself would protect him from that possibility, if the self-pardon were valid.Why would he not do it any earlier? Because he might well be impeached if he pardoned himself, and the pardon power does not extend to impeachment. But he couldn’t be impeached on his last day or after he leaves office.If he had doubts about the validity of a self-pardon, he could also make a deal – explicit or implicit – with the vice president to resign a day before his term was up in exchange for a pardon from the one-day president.So timing would be everything.Will we ever know for sure whether a self-pardon is constitutionally permissible? Unlikely.First, a president would have to pardon himself. The political cost of such an action would be very high. Second a prosecutor would then have to try to prosecute the former president. Third, the former president would have to raise the pardon as a defense. Finally, the courts would have to decide whether, under our system of separation of powers, the courts have jurisdiction to review a presidential self-pardon. This last contingency is interesting, because as Justice Holmes reminded us, the power to pardon is not a mere “private act of grace,” but rather an important part of our “Constitutional scheme” of checks and balances and separation of powers.But the pardon power is not without limit. A president could almost certainly be prosecuted after leaving office for accepting a bribe to grant a pardon. Although he would be prosecuted for accepting the bribe, the granting of the pardon would be the quid pro quo, and thus an essential of the crime. James Madison wrote in The Federalist Papers that no person “is allowed to be a judge in his own case.” Would violation of this principle bestow jurisdiction on a court to invalidate a self-pardon? The answer to that question remains unclear.I’m relatively certain these contingencies will never come to pass. So we will have to learn to live with the uncertainty of never knowing whether a president has the constitutional authority to pardon himself.Follow Alan Dershowitz on Twitter: @AlanDersh and on Facebook: @AlanMDershowitz.