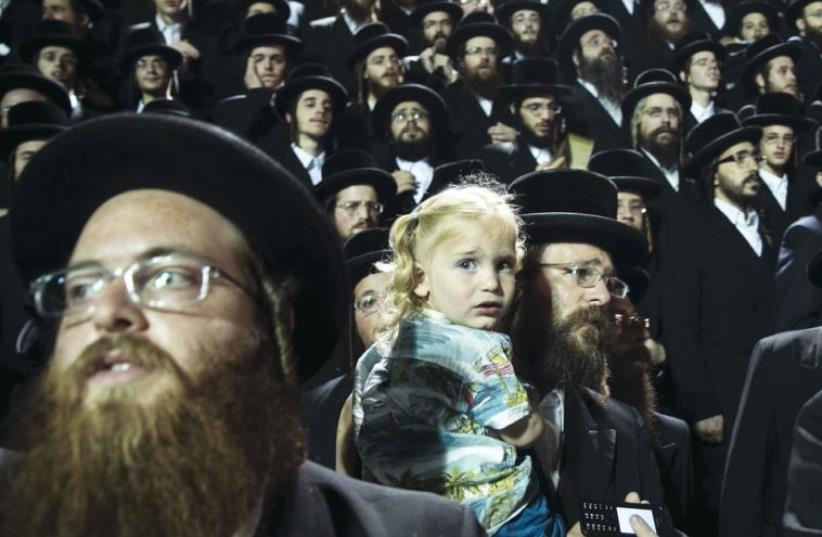 US Orthodoxy judaism
(photo credit: REUTERS)
Advertisement
This week, the Jewish People Policy Institute is hosting its annual conference in Jerusalem regarding the Future of the Jewish People. Fittingly, participants will assess Shifting Trends in the West and their Impact on World Jewry. The Trump Disruption and Brexit Eruption are two of many headline-generating earthquakes unnerving the West, which will affect the Jewish community, for better and worse. Clearly, as Bob Dylan first sang in 1965, “something is happening here but you don’t know what it is, do you, Mr. Jones?” I will resist the historian’s temptation to use JPPI’s good question to offer a wide-angle analysis of key Western trends – along with my understanding of which forces sustained us and enabled us to reach this moment. Just consider the headlines. Cultural Decay has people brutalizing one another on social media. Family Breakdown has kids raised without anchors. Social Degeneration has individuals feeling solidarity with particular subgroups while resenting all others. Political Polarization has fellow citizens treating rival partisans as enemies, not reasonable people who reached different conclusions. Communal Alienation has selfishness trumping altruism, and self-indulgence eclipsing virtue. And, finally, Trumpian Nationalism has besmirched the reputation of nationalism, that amazing force that united communities, spread big ideas, generated unprecedented prosperity and inspired pioneering inventions, with many now assuming that nationalism must be nihilistic and chauvinistic, not liberal or expansive.Unfortunately, most American Jews have become so Americanized that these same forces not only have swept us up but we spawned many of these problems. If the period from 1917-2017 was a “centrifugal century,” spinning individuals away from traditional structures, values and allegiances, Jews invented many solvents and centrifuges, leading the revolutions of capitalist consumerism, individuating technologies, personal liberty and decadent popular culture, all celebrating the “I” not the “us,” the “is” not the “was.” Delighted to be free and equal, Jews embraced America’s great freedoms. Rooted in a culture that celebrated individual dignity and success through smarts, Jews seemed custom-made for these times.Paradoxically, just as there is something deeply Jewish about all this cosmopolitanism and creativity and individualism, there is also something deeply un-Jewish about it – and about the results. Watching families, communities and nations either degenerate into self-absorption or overcompensate with extra aggression is not the Jewish way – or the Zionist way. We need a counter-revolution led by Jews against the previous revolutions shaped by Jews.Focusing on one essential idea, the key to this “Jew-jitsu” is that both Jews and the West should remember the communalism and idealism so central to Judaism. Rather than being the modern world’s leading solvents, Jews should take on the task of being the West’s covalent bonds, the connectors, the uniters, the solidifiers, using altruistic ideas, not simply kinship or proximity, as social glues – and fuels.Without rejecting modern politics, society, culture, or economics, we should remember that we are the People of the Book, not just of Facebook, that we once followed Pirkei Avot, our sages’ wisdom, as carefully as many scrutinize the markets today. We taught the world the power of becoming a people with a mission, of understanding history as having an aim and a forward trajectory, and of always stretching, striving to improve ourselves individually and collectively, asking “is it right,” trying to achieve goodness through our transcendent tribe not by transcending our tribe.We should delight in Judaism being countercultural, standing for particular morals and ethics. We should toast Israel for being unfashionable, an example of ethnic nationalism that understands that belonging to a people with defining democratic beliefs means that nationalism isn’t just about being a member of a static community, but of becoming a better person while making the world a better place.Jews should function as covalent bonds, as connectors bringing human networks alive, injecting them with meaning, tempering extremism with received wisdom, balancing the lure of the new with the insight of the old, self-obsession with responsibility to the community. Jews should teach the power of what Theodor Herzl called an Altneuland, an Old New Land, that appreciates tradition and modernity, that wants to be a values nation not just a start-up nation.Consider how Jews as covalent bonds – connectors brimming with moral missions – can push back against some of today’s toxic forces. Respecting rabbinic strictures against lashon hara, derogatory speech, could improve the Internet.Affirming traditional Jewish family values – propped up by family-affirming Jewish rituals from Shabbat to seders – could counter Western family breakdown (note the lower rates of births to single mothers in Israel as opposed to the US). Living communal Jewish ideals about acting properly toward others, donating to charity, bettering the world, could enhance social solidarity, detoxify politics, counter alienation and resist selfishness. And championing the Zionist notions of creating an Am Segulah – an exemplary nation – that you and I can change the world, can restore nationalism’s good name.I am not naïve. I know most of the Jewish people have forgotten these values and the Jewish state often fails to live by them. But, here, too, we should counter modern cynicism, defeatism and resignation with that optimistic, inspirational Talmudic teaching that we cannot finish the mission nor dare we shirk it – along with the enduring Zionist insight that we become a nation, we create a community, to build – and be built.

The author, a Distinguished Scholar in North American History at McGill University and a Visiting Professor at the Ruderman Program at Haifa University, is the author of The Age of Clinton: America in the 1990s, published by St. Martin’s Press. His next book will update Arthur Hertzberg’s The Zionist Idea. Follow on Twitter @GilTroy.