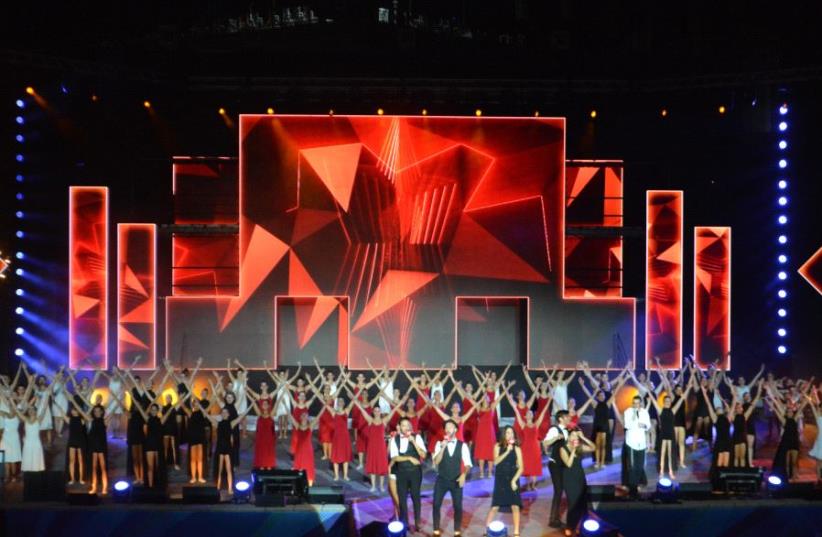 Closing ceremony of the 20th Maccabiah
(photo credit: KAYLA STEINBERG)
Advertisement
Where’s the language police – I wish to report a crime. “Racism” means biologically-based bigotry. The Oxford English Dictionary adds: “Prejudice, discrimination, or antagonism directed against someone of a different race based on the belief that one’s own race is superior.” Nevertheless, today, it’s hijacked for incorrect uses, usually to mean “you’re wrong – and evil.”This is not a victimless crime. It minimizes the anguish minority groups endure when their innate characteristics are turned against them. In 1975, Bayard Rustin, the gay, African-American civil rights activist who proudly spread “social dislocation and creative trouble,” warned of the “incalculable damage” done to blacks’ cause when “racism” becomes an all-purpose political weapon, not a carefully-guided moral missile. Watching the UN call Zionism “racism,” Rustin denounced this “insult to the generations of blacks who have struggled against real racism.” Rustin’s friend, the liberal Democrat representing America in the UN, Daniel Patrick Moynihan, warned that, thanks to this lie, whether or not “Israel was responsible, Israel surely would be blamed... Israel would be regretted.”It’s depressing to open the newspaper, even when it’s Haaretz, and see that hijacked lie and affront to African-American suffering perpetuated in modern Israel. There it was, on Sunday, an inaccurate, insulting column called “A Racist Wedding at the Maccabiah Games.”Rogel Alpher tried sullying that beautiful moment when Avi Steinberg of Canada’s Maccabiah ice hockey team surprised his girlfriend Rachel Dixon by proposing, then marrying her, during the “Jewish Olympics’” opening ceremonies. “The insistence that Jews marry other Jews is racist,” Alpher fumed, repeating the claim 85 words later.Echoing false charges doesn’t make them true – it just makes accusers look hysterical. Two Jews choosing to build a Jewish home together – one of whom, Dixon, had just converted, is called community building, not racial exclusion. And Alpher’s column was misleading. The public wedding celebrated their love, not her conversion. Reuben Poupko, a Montreal rabbi who helped with her conversion, reports that “the organizers were completely unaware that she had converted when they approached the groom to incorporate the wedding into the opening ceremonies.” (Haaretz has rejected this correction twice.)The fact that Dixon could convert to the Jewish religion and join the Jewish People demonstrated just how biologically permeable and non-racist Judaism is. Walking down any Israeli street demonstrates that while Judaism encourages in-marriage, history has produced a Jewish nation with a range of races, skin colors and ethnic types.If most Haaretz readers visited Papua New Guinea, where the Urapmin tribes practice endogamy – in-marriage – they would return charmed, praising the lovely natives for perpetuating their customs and community, resisting modernity. But when Jews do it, it’s “racist.” Clearly, the hatred against us remains so intense that Zionism and Israel are “regretted.”Such an attack shows utter ignorance of Jewish tradition – and of life and love too. Allow me to hijack a great insight from Ze’ev Maghen’s self-described philosophical rampage, John Lennon and the Jews. What if young Steinberg had proposed to Dixon by saying, “I love you! I love you! I love you! I love you as much as the female MC over there, all the women I ever dated, every woman in this stadium”? The wedding probably wouldn’t have proceeded, but the viewing audience would have learned a lesson universalists overlook: love is preferential. Claiming to love everyone means not truly loving anyone. Only by bonding selectively, intensely, with family members, significant others, particular friends and relatives, do we stretch and reach our best selves.So, too, with liberal nationalism. Feeling responsibility for our community teaches values, propelling us beyond our selfishness. For a wedding present, I am buying the young couple – whom I don’t know – Maghen’s book – with four copies for them to share with friends.The false charge of racism felt particularly offensive this Sunday because Israelis were still reeling from the execution of two Israeli policemen on Friday in Jerusalem. Three terrorists came out of the Temple Mount, slaughtered two young men, then rushed back in, unconcerned about defiling that sacred space. The victims were Druse Israelis. Haiel Stawi, 30, became a father three weeks ago. Kamil Shnaan, 22, was planning an engagement party next week.Shortly before this now-sobered Shabbat began, my son Yoni shared with us a teaching that during Saturday afternoon prayers, any Druse heroes who fell defending Israel are honored. The existence of this new Israeli custom shows, tragically, that these two young heroes whom we mourn as our own children were not the first non-Jewish Israeli citizens to die defending the Jewish state – and, alas, won’t be the last.If people shouldn’t shout “fire” in a crowded theater, analysts shouldn’t shout “racist” in our inflamed political context – except when justified. Haaretz owes the young couple an apology – and an explanation. Why is bonding together through marriage or sport empowering when women do it, liberating when gays do it, healing when blacks do it, yet “racist” when Jews do it?There’s a specific word for that ugly old phenomenon of attacking Jews for behaviors others are allowed. That word is antisemitism. The modern world has shown that Jews, even Jewish Israelis, can be guilty of fomenting that ideological Jew-hatred.Radical leftists’ ridiculous race to accuse Jews and Zionism of racism must end. Criticize Israel if you wish but do it without sloppy, inflammatory language – or demonizing double standards.The writer is the author of The Age of Clinton: America in the 1990s. His forthcoming book, The Zionist Ideas, which updates Arthur Hertzberg’s classic work, will be published by The Jewish Publication Society in Spring 2018. He is a Distinguished Scholar of North American History at McGill University. Follow on Twitter @GilTroy