Tragically, too much of Religious Zionism has degenerated into a new idolatry, a land worship trumping all other values. 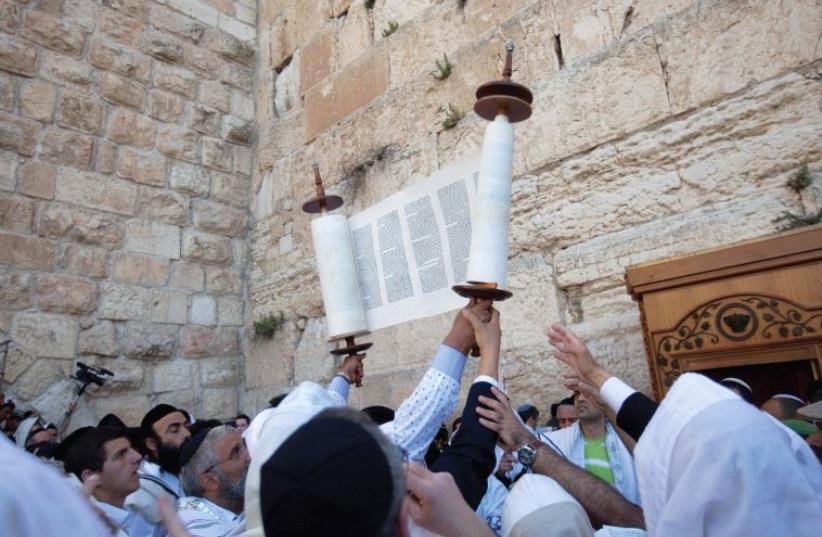 ‘WHEN WE asked them about the criteria of belonging to the Jewish people, many turn to religious criteria’. But what about other criteria?
(photo credit: REUTERS)
Advertisement
My son Aviv just graduated from the Shalom Hartman Institute’s Charles E. Smith High School for Boys. This ends a nine-year relationship his older brother began. Inevitably, we had frustrations. But we were blessed with a school that nurtures souls while sharpening minds.“The best thing about the school is the teachers,” says Aviv. “They’re all great people. Even when they’re not the greatest teachers, you respect their values – they’re great role models.” The teachers – and administrators – are “mensches,” moral exemplars who invest in their students and care about the world.These are teachers who track your spiritual and academic progress – softly, lovingly, not heavy-handedly; stay after lengthy schooldays to talk to you; teach seventh-graders to line-dance so you’ll feel less awkward at bar mitzvas; sweat side by side with you in multiple tzedaka projects; prepare for exams and contemplate life with you at Burgers Bar; and weep during your final Shabbat together.These are life-mentors who, after you’ve graduated, visit you at mechina; study Talmud with you weekly when you’re fighting cancer; and dance at your wedding because it’s important to you that they be there.These are role models who, after finishing their endless (severely underpaid) school tasks, still find time, energy and idealism for second jobs, their own kids, research projects, social-action projects, political projects. At graduation, the institute’s president, Rabbi Donniel Hartman, called the teachers – and administrators – “a gift to the Jewish people,” saying “Am Yisrael is better because of you.”“The high school educates toward modern Judaism, academic excellence, social responsibility and values,” Hartman’s website proclaims. The Hebrew sentence “Hatichon mehanech le…” translates well educationally, if not linguistically. “Educating toward” implies vision, evolution, action, not mere knowledge transfusion. It nurtures thoughtful, critical, passionate, proud, patriotic Israelis, Jews, human beings.Applying Hartman’s now legendary brand of text-based substantive learning and critical thinking, the school prefers questioning openly and engaging tradition thoughtfully to command-and-control Orthodoxy. If you want a school where the students stand when The Rabbi enters – look elsewhere. But if you want a school where Donniel Hartman sits regularly with the 12th-graders to discuss their theological and ideological questions – welcome home.IN TODAY’S polarized Israel – and Jewish world – some of my closest friends would cringe if they visited. They would consider the gender segregation anachronistic and sexist. They would see this sea of kippa-wearers as religious fanatics. And they would dismiss some of my sons’ favorite teachers as political extremists – wild-bearded, gun-toting settler types.Such caricatures expose the shortcomings of Religious Zionism and its critics.Tragically, too much of Religious Zionism has degenerated into a new idolatry, a land worship trumping all other values. The fight for settlements frequently upstages any sensitivity to our Palestinian neighbors, while distracting from the Torah’s broader social justice agenda. This obsession violates the call of the high school’s founder, the late Rabbi David Hartman, for an Israel of “moral seriousness and political maturity and wisdom.”Hartman tightrope-walks, sometimes uncomfortably – sometimes self-righteously – between two civil wars. Within the religious world, Hartman belongs to the small, scrappy minority that doesn’t fear words like “pluralism,” “feminism,” “liberalism,” even “two-state solution.” Yet within the Jewish world, Hartman seems to the hostile super-majority as illiberal and close-minded as the rest of “them” – spitting the word “them” out with intense antireligious fervor.Looking rightward, Hartman High says: “No!” While reflecting various opinions about the territories – like everything else – the school’s agenda transcends that one question. Hartman High embraces the core Religious Zionist mission David Hartman called “a return to the fullness of the Sinai covenant – to Judaism as a way of life,” publicly and privately. This involves a serious Judaism, a 24/7 Judaism – one that asks and doesn’t just follow, that takes responsibility and doesn’t just excuse, that dreams and doesn’t just defend.What Hartman calls “Modern Judaism” infuses the push toward academic excellence, social responsibility, good values. Looking leftward, Hartman High also says “No!” The school challenges bigoted secularists who can’t see any diversity in the religious community – and the cherry-pickers who can no longer see any beauty in Judaism’s orthodoxies.These critics cannot comprehend that, for Religious Zionists, each strand reinforces the other, like braided rope: traditional Judaism and proud Zionism and the quest to be good wrap around one another. When one Hartman alum bravely exposed his army commanders’ sexual harassment, he hadn’t gone “modern” or “feminist” – his traditional religious values condemn such abusiveness. When most Hartman alums choose an additional year of studying or volunteering, before enlisting in elite IDF units, often as officers, their patriotism reflects the broader package – serving the country “isn’t a burden,” their principal Shaul David said, “it’s a privilege.”And as my children argued about ideas, distributed food to the needy, studied Torah or watched movies with ex-convicts in a halfway house, prayed tearfully for their three kidnapped peers in 2014, cleaned graves, prayed, and sang hassidic nigunim in Poland, played with migrant workers’ children at Hartman-run after-school programs in Tel Aviv, protested anti-Arab “price-tag” thuggery, mourned at neglected Mount Herzl graves on Remembrance Day, and survived the endurance tests called the bagruyot – Israel’s matriculation exams – they understood it as one lovely resilient bundle.Admittedly, here’s one happy parent’s perspective. Hollywood depicts high schools riddled with toxic social cliques and impotent teachers. Our kids were lucky to find a school where, Cheers-style, everyone knew their name, while providing wonderful friends, inspiring life-guides, constant questions, and anchoring values.The writer is the author of the newly released The Zionist Ideas, an update and expansion of Arthur Hertzberg’s classic anthology The Zionist Idea, published by the Jewish Publication Society. A Distinguished Scholar of North American history at McGill University, he is the author of 10 books on American history, including The Age of Clinton: America in the 1990s. www.zionistideas.com