Center Field: Piety and peoplehood with pluralism and pride

The best metaphor would be the siddur, the prayer book. It keeps growing over the centuries, evolving with new ideas while preserving the fundamentals. 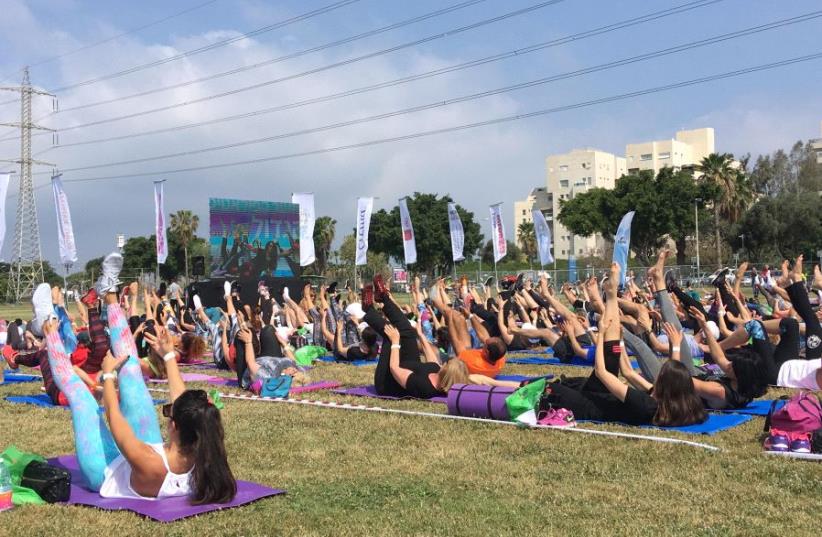 Israeli fitness buffs gather in Tel Aviv to hold the biggest Pilates class ever in Israel
(photo credit: Lahav Harkov)
Advertisement
I never use this column to refute letters to the editor, but Sholom Gold’s recent slash and burn against Irving (Yitz) Greenberg (“Wary of amateur psychologists,” Letters, October 7) demands a response.Gold misrepresented Rabbi Greenberg’s thoughtful column of October 2, “Give Netanyahu the honorable retirement that Israel needs and he deserves,” as a cheap attempt by yet another lefty to gain “entry into that rarified sphere of intellectuals who know what’s best for us common folks.” That caricature missed the elegance behind Greenberg’s argument – showing Netanyahu hakarat hatov, acknowledging the good he’s done, while saying what more and more Israelis are saying: time to move on.Gold’s instinct to cry “lefty” because someone dares criticize Netanyahu helps explain why Greenberg suggested that Netanyahu retire. Mud slides downhill. Bibi’s corruption and cynicism keep cascading, sweeping up baby Bibis, too. Bibi demonizes all opponents – no matter how right-wing or simply right – as loony leftists. Such divisive demagoguery reduces his supporters to parrots, enablers and mudslingers, undermining serious debate.Most outrageously, Gold disrespects one of the greatest living Jewish intellectuals. Look at many of American Jewry’s greatest accomplishments over the last half-century and Greenberg’s fingerprints are all over them. He was ahead of the curve in making Jewish studies a respectable field of scholarship; in launching the campaign to save Soviet Jewry; in teaching us to remember the Holocaust sensitively, not defensively; in engaging Christians substantively; in empowering women in Orthodox Judaism organically; in helping to start Birthright.Underlying this activism is a bold, creative, yet traditional modern Jewish theology. Intellectually and spiritually, Yitz’s writings and teachings, amplified by the towering personal example he and his wife, Blu, have set, have taught generations of us how to cherish the past while appreciating the present, synthesizing thoughtfully, modernizing elegantly, to keep Judaism vibrant in the future.On any given day, let alone in every month and year of his life, Greenberg has done more to enhance modern Jewish life than most of us do in a lifetime of efforts. Someone like him does not need someone like me to defend him. But, I, for one, could not start the New Year with a pure heart if I didn’t stand up against this ugly little letter that was made even worse by appearing during the Ten Days of Repentance.The cosmic cure to this superficial attack is to engage Greenberg’s thought deeply. Read The Jewish Way to appreciate the Jewish holiday cycle in new ways. Read Sage Advice to see Ethics of the Fathers’ morality through fresh, wise eyes. Or read the newly released Yitz Greenberg and Modern Orthodoxy: The Road Not Taken, so ably edited by Adam Ferziger, Miri Freud-Kandel and Steven Bayme.THE SUBTITLE of this latest book highlights Greenberg’s frustration with an Orthodox world that turned rightward and inward, losing influence, sacrificing credibility, alienating many young people born into the movement. Most dismayingly, Greenberg believes this “flight from history and responsibility” missed a golden opportunity to help more modern Jews – and moderns overall – navigate our confusing, welcoming, alienating modern world with a healthy love of tradition, Torah and God.Nevertheless, reading Greenberg’s extraordinary autobiographical essay in the volume, I am more struck by the many paths he and his wonderful thought partner Blu have trailblazed and the constructive syntheses they developed.In 1968, Greenberg warned that “Judaism is bleeding to death in America. Many of its best sons and daughters are constantly attracted to the new ethos and feel that they must abandon the old to embrace the new.” Today, he explains that while he hoped for a “renaissance and rebirth in a supportive, pluralist American society,” he feared the “growing assimilation and disintegration.” He knew American Jewry would wither “if an ill-educated, religiously infantile Jewry entered totally into the most open and accepting culture of all time.” Now, with the baseline of “communal engagement and educational fortification... much lower” than he imagined, he sees an increasingly irrelevant and militant ultra-Orthodox minority shrinking into its own ghetto as a growing super-majority abandons Judaism en masse.Rejecting both paths, Greenberg chose to “live dialectically.” Guided by “two polar navigational stars,” this rabbi and Harvard history PhD retained faith in God and the Torah while helping Jews “live and flourish in modernity’s physical/cultural environment.” He remains Orthodox because he’s all in: accepting Judaism as an integrated system, he chooses Judaism over modernity when forced, and refuses to pick and choose among commandments. But he is Modern Orthodox because he incorporates some new lessons from the wider world, continuing to do what traditional Jews always did – adding and adapting far more than subtracting.The best metaphor would be the siddur, the prayer book. It keeps growing over the centuries, evolving with new ideas while preserving the fundamentals.Key to understanding Greenberg’s Modern Orthodoxy is that he calls himself a pluralist, not a relativist. Relativists are so open-minded their brains fall out; pluralists are open-minded enough so their brains – and hearts – can expand and flourish.A short essay cannot do justice to this man of intellect and integrity. But to summarize his profound thought leadership in popular terms, I would call Greenberg’s Judaism Pilates Judaism – strengthening our core with piety perfected by pluralism and pulsating with peoplehood pride.Especially in this age of flabby, lazy Judaism and shallow, Johnny-one-note thinkers Left and Right, we should take his road. We should join him – and Blu – on the substantive spiritual superhighway they’ve maintained and modernized toward a vital, meaningful, moral modern Jewish life.The writer is the author of The Zionist Ideas, an update and expansion of Arthur Hertzberg’s classic anthology, The Zionist Idea, published by the Jewish Publication Society. A distinguished scholar of North American history at McGill University, he is the author of 10 books on American history, including The Age of Clinton: America in the 1990s.