Loyalty is a virtue. But when single-mindedness meets small-mindedness, loyalty curdles. That slavishness breeds the political methodology of totalitarianism. 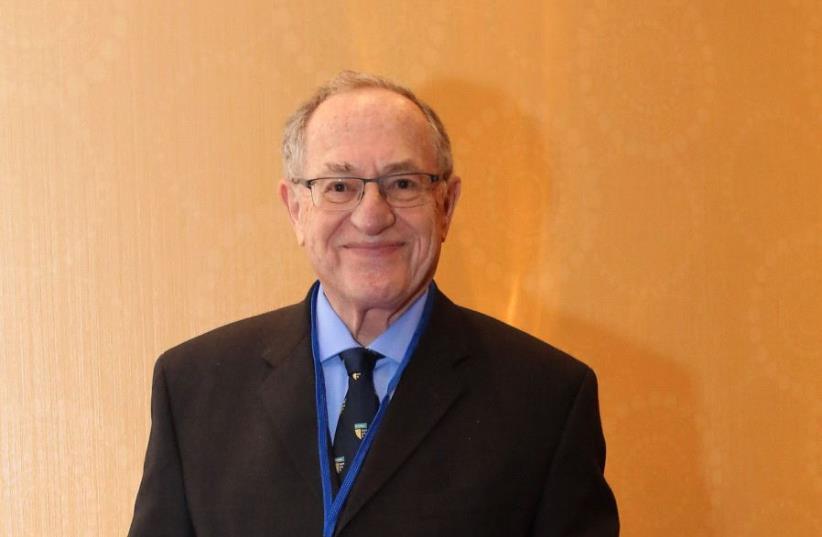 Alan Dershowitz at the JPost Annual Conference 2017
(photo credit: SIVAN FARAG)
Advertisement
Prof. Alan Dershowitz doesn’t need defending from the likes of me; the Babe Ruth of defense attorneys needs no pinch hitters. Still, the demonizing of Dershowitz demands denunciation. Core democratic values are at stake, not the legendary Harvard law professor’s feelings or reputation.An annoyingly independent – yet consistent – thinker, Dershowitz rejects Democrats’ groupthink demonizing absolutely everything Donald Trump does. Dershowitz abhors Trump’s politics and personality. But, applying the legal criteria he used to defend Bill Clinton, he insists that Trump as president may fire or pardon whomever he wishes. Dershowitz fears that the lynch-mob mentality targeting Trump criminalizes politics alarmingly. America’s “innocent until proven guilty” standard risks becoming “criminally guilty when proven politically repulsive.”For this, Dershowitz has been bashed online and shunned in person. Typically for these cranky times, when he mentioned that some Martha’s Vineyard liberals cold-shouldered him, his critics missed the point while proving it. The Twitterverse mocked him for whining about his social woes and thus confirmed his warning about a new totalitarianism.Dershowitz can manage his summer social life without his intolerant ex-friends, but this bullying suggests that Americans are mismanaging their political lives with a soft totalitarianism, left and right.This spring’s finale of FX’s Soviet-spy-next-door series The Americans reflected this ends-justifies-the-means politics. Once, the two KGB agents posing as suburbanites might have died in a punishing-yet-purifying hail of bullets. Or the KGB would have neutralized the more ruthless partner, Elizabeth, as the FBI imprisoned her conscience-stricken husband, Philip, condemning him to eat his heart out for life. Instead – spoiler alert – their kids live out the American dream, if they choose. The parents return to Mother Russia, having saved Mikhail Gorbachev and world peace.This happyish ending implicitly justifies “the illegals’” crimes. The Americans thus teaches the un-American, Marxian, and Trumpian lesson Dershowitz rightly fears: push your agenda, whatever it takes. In 2016, Trump said: “I could stand in the middle of Fifth Avenue and shoot somebody and wouldn’t lose any voters, okay?” Trump wasn’t being homicidal; he was boasting “I have the most loyal people.”Loyalty is a virtue. But when single-mindedness meets small-mindedness, loyalty curdles. That slavishness breeds the political methodology of totalitarianism.People today think “Nazi” when they hear the word “totalitarianism.” The Soviets weren’t genocidal totalitarians like the Nazis. As smooth-talking totalitarians, they tried seducing the world by following some rules, sometimes. Their high-minded pretensions fooled millions then, like some today. The Americans treats the KGB agents as motivated more by patriotism than by the brutal fanaticism-fear mix that fueled Soviet Communism.The delusions of yesteryear and the blurred memories of the present prevent many from heeding history’s warnings. While its constitutional system remains impressively resilient, America is witnessing a soft totalitarianism in the public sphere that’s undermining civility.This ever-intensifying partisan polarization spawns demagogues like Trump and spurns free agents like Dershowitz. It prizes ideological consistency and political loyalty over decency, complexity, compromise, basic rights. Facts turn fluid, because inconvenient truths are dismissed as devious fictions.Totalitarians sacrifice competing principles and venerable values to maintain one overriding truth. They treat skeptics like opponents, then define opponents as enemies to be bullied, or even imprisoned. Trump’s will-o’-the-wisp fluidity, refusal to acknowledge error, demagoguery, and demands for total fealty reveal an unnerving, un-American, soft totalitarianism.Alas, no party owns the franchise on unreason. Twenty years ago, Republicans fumed when president Clinton declared political war against the special prosecutor. Today, the Democrats claim they’re outraged by similarly unpatriotic behavior, while dodging responsibility for their trailblazing.This my-way-or-the-highwayism of the Trumpistas is, sadly, scarily, paralleled by the identity bullies on campus. They violate opponents’ free speech – sometimes violently, sometimes by prescribing reeducation through diversity training – while rationalizing the violence of those they deem worthy, from rioting anarchists to Palestinian terrorists.The zealots in both parties who dismiss moderates as traitors as the 2018 midterms approach or won’t dine with those who dare disagree with them suggest a creeping totalitarianism, left and right.Such soft totalitarianism, American style, is to Soviet, Nazi or Islamic totalitarianism as ice floes are to icebergs – much milder doses. And the laments declaring today’s partisanship “the worst ever” overlook America’s tragic history of political fanaticism – during the Revolution, the Civil War, Southern segregation, the Sixties.Identifying soft totalitarian impulses left and right doesn’t make all forms equally toxic. The totalitarianism of those in power is usually scarier than the opposition’s zealousness – especially today. Trump brings a particular single-mindedness to his defining crusade – Drain the swamp! In justifying his crudity and U-turns, he and his supporters reject the complexities, decencies and ideals that traditionally civilized politics – somewhat.In 2015, Trump cleverly exploited the campus thuggishness dominating the headlines. When doctrinaire undergraduates demonized Halloween masqueraders – and their defenders – or terrorized speakers, Trump strutted around like the rare truth-teller.Totalitarians share a hysteria about the crisis of the moment and a good-versus-evil worldview that bulldozes past any resistance. Liberal democratic politics require some compromise, some grays; totalitarianism reduces everything to black and white, refusing to hear Dershowitz’s case against the case against Trump, or endorsing Trump’s boorishness because you like his policies.Seeing the soft totalitarianism in our political rivals is easy; seeing it in ourselves is hard – like looking through the Jennings family’s stereotypical suburban life on The Americans to see the monster next door, at your Thanksgiving table, posing as your best friend; or shunning a friend at dinner because he deviates from PC norms.The writer is the author of the newly released The Zionist Ideas, an update and expansion of Arthur Hertzberg’s classic anthology The Zionist Idea, published by the Jewish Publication Society. A Distinguished Scholar of North American history at McGill University, he is the author of 10 books on American history, including The Age of Clinton: America in the 1990s.