Center Field: Use your college years to revolutionize Judaism

Too much American Jewish life entails ritualized repetition, running in place, not moving forward, or juvenile Judaism, watered down to make it potable. 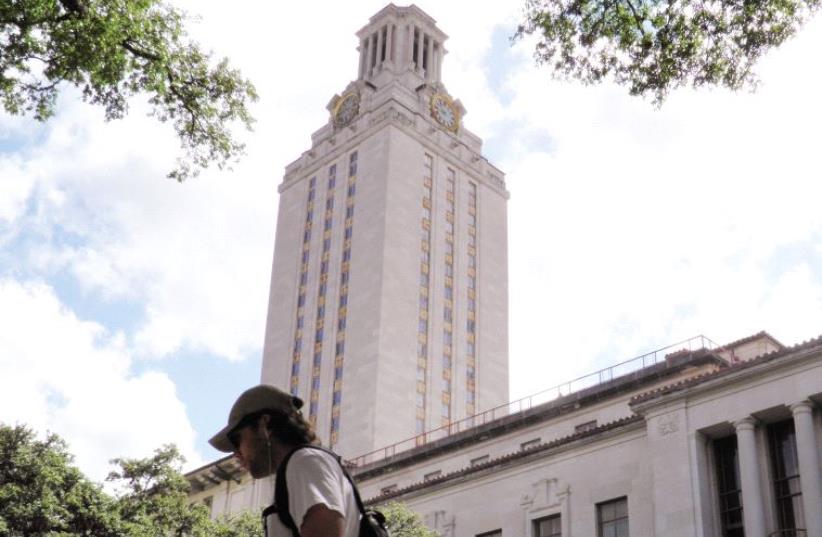 BACK TO school. A student walks at the University of Texas campus in Austin, Texas.
(photo credit: REUTERS)
Advertisement
Dear Incoming North American Jewish Freshman (or returning Jewish student), I assume you’ve found your Bed, Bath and Beyond in order, your parents left and stopped embarrassing you, you’ve unpacked your stuff and met your roommate, and the drinkfest, er, I mean orientation, has begun.Good luck! You’re starting a great adventure. I loved college so much I never left. Your first homework assignment should be to call home and thank your parents for the great gift they (and your country) provide, granting you crucial years studying rather than serving in the army or working full-time. Exploit this opportunity: stretch your mind, confront new ideas, read great books, write smart papers, forge great friendships and have fun – although, despite my joke, resist the extreme party culture that derails too many students today.As you adjust, I challenge you: don’t just preserve your Jewish identity, don’t even just build your Jewish identity. Revolutionize it. I know I’m supposed to give the usual Jewish guilt trip – saying if you don’t join Hillel, date Jews exclusively and defend Israel, you will betray the Jewish people, and your family. But let’s be bolder. Go beyond guilt trips to launch your own Jewish journey. First, examining the Jewish experiences you’ve had so far in your life, figure out how to do better, and do it! David Ben-Gurion said Israel should be a dynamic covenant, not just an ark. An ark “is passive,” he explained. “We are a busy, forward-looking nation with much more work to accomplish. Israel cannot just be a refuge. If it is to survive as a valid nation it has to be much, much more.”Most of your Jewish experiences probably haven’t even been ark-like; arks at least drift forward. Most experience Judaism as a defensive bunker, an overdone materialist cathedral, or an arid desert. That’s why most young Jews abandon Judaism.Most of the few Jews who care want that ark, some nostalgic, womb-like Jewish experience reminding them of home. In The Jew Within, Steven Cohen and Arnie Eisen note: “The Judaism practiced by adult American Jews is almost always bound up in key family relationships and rites of passage, nourished by a stock of memories.”I, too, like my gefilte fish and matzah balls, along with warm family stories, but is that enough? Don’t reduce a rich 3,000-year-old tradition to herring and Yiddishisms, to some whiffs of the old country or Jewish exotica. We can do better. We must do better.A covenant is more conceptual, more spiritual, more mission-driven than the static collection of strange rituals and folktales most young Jews inherit today.Too much American Jewish life entails ritualized repetition, running in place, not moving forward, or juvenile Judaism, watered down to make it potable.And covenants, while binding, can be renegotiated and reinterpreted. Ben-Gurion taught: “You cannot reach for the higher virtue without being an idealist.The Jews are chronic idealists.” Ben-Gurion’s longtime aide Shimon Peres often celebrates Jews’ “dissatisfaction gene.”Access your Jewish dissatisfaction, then fix it with others. Be creative. Don’t be passive consumers. Be owners, or better yet, revolutionaries. You and your generation should shake things up, enlivening our tradition.And here’s the best part: by doing that, you will actually reengage with our tradition. Judaism hasn’t survived for so long by being stagnant or superficial.And let’s make it harder. Your generation’s go-to spot when innovating is either inclusivity or social media.With all due respect, those are more about foreign policy than the serious internal re-engagement needed.Follow those agendas if you’re interested, but don’t stop there. Start by learning seriously, not just criticizing, then tap into a multi-dimensional Judaism with parts that inspire you.In America, “change” in Jewish terms often involves subtraction, treating Judaism as a burden that must be lightened to be popular. Use a different equation. Ask what to add – spiritually, intellectually, morally, philosophically, ritually – to expand your Jewish involvement and universe.Similarly, don’t simply defend Israel and Zionism on campus; engage with Israel ideologically not just politically, drawing inspiration from the Zionist idea.Zionism was a revolution to create a New Jew no longer oppressed by European anti-Semitism. In North America today, our greater challenges are rampant assimilation, epidemic ignorance, and tedious Jewishness.Ironically, by tackling these problems, by using the excitement of the Israeli national experiment as one of a series of straws to stir things up, you will create a new, more compelling, Jewish and Zionist cocktail that ultimately, will be far more potent in fighting campus anti-Zionism. If more Jews felt more deeply about Israel because it was central to their lives, to their identities, they would better resist the over-politicizing and demonizing of Israel.Most people will judge your college career by your grades and your next step, be it graduate school, work, or unemployment. But life is not just a way station to your next achievement. Wherever you sit on the religious spectrum, forging a substantive, creative Jewish identity, a renewed Jewish covenant, this dazzling new Jewish cocktail you will mix, can help you build community, find meaning and enrich your life in many ways. And if you do it right, millions of American Jews who don’t even realize they need your leadership will gladly embrace a new, improved, less boring, more compelling Judaism and Zionism.The author is professor of history at McGill University, is the author of The Age of Clinton: America in the 1990s, published by St. Martin’s Press. His next book will update Arthur Hertzberg’s The Zionist Idea. Follow on Twitter @ GilTroy.