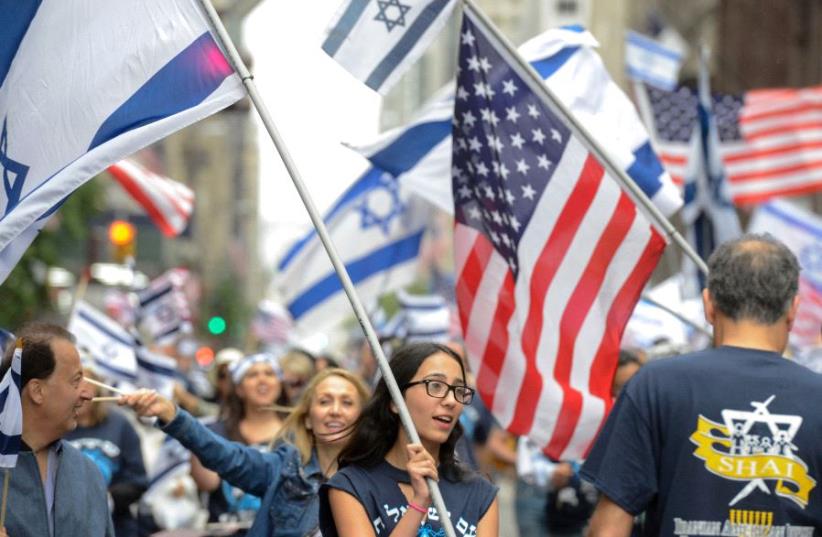 People participate in the "Celebrate Israel" parade along 5th Ave. in New York City, US, June 4, 2017.
(photo credit: REUTERS/STEPHANIE KEITH)
Advertisement
On May 14, 1948, US President Harry Truman recognized the State of Israel. That move launched America’s now-70-year-old mutually beneficial friendship with Israel. That move also culminated a half-century process of American Jews becoming Zionized, shifting from skittishness about a Jewish state to support.Modern Zionism began in Europe, seeking to solve the Jewish Problem of rootlessness and antisemitism: if every people needed a state, so did the Jews.But whereas Europe rejects its wandering Jews, America was different. This new “Promised Land” offered a welcoming alternative to the Jews’ ancient Promised Land. The two million Jews who arrived in America from 1880 to 1924 wanted to build new homes – not rebuild their old-new homeland. Zionism threatened many of these insecure Americans, who feared being accused of dual loyalty to “the Golden Medina,” this land whose streets were supposedly paved with gold but were often potholed with intolerance.Anxious to please, America’s leading Reform rabbis distorted Jewish history and ideology. Their 1885 Pittsburgh Platform declared, “We consider ourselves no longer a nation, but a religious community.” Denying Jewish peoplehood and renouncing “a return to Palestine” made assimilation easier.It took a secure American Jew, Supreme Court Justice Louis Brandeis, to start Zionizing American Jewry. Brandeis emphasized liberalism’s and Zionism’s common commitments to liberty, equality and justice. He cast the early Zionist chalutzim (pioneers) as heirs to the religiously oriented Pilgrims and the practically-minded cowboys.Those fusions reconciled Zionism and Americanism. Brandeis declared Irish-Americans, Italian-Americans and American Jews “better Americans” for having ethnic pride. Similarly, the social theorist who coined the term multiculturalism – Horace Kallen – was a Zionist.IN FOUNDING Hadassah, the Woman’s Zionist Organization of America in 1912, Henrietta Szold built on Brandeis, championing “practical Zionism.” This was a Zionism of rolling up your sleeves and helping fellow Jews build a homeland. In mobilizing women to raise money, learn about Zionism, establish hospitals, Szold sidetracked identity conflicts. The Zionist activists’ advocacy and fund-raising Americanized them. They became more confident and more politically astute as citizens.Still, American Zionism remained marginal. Just as only thousands trickled into Palestine while millions surged into America until the immigration restrictions, most American Jews emphasize their newfound Americanness over their ancestral Jewishness. They echoed the 11-term California Congressman Julius Kahn, who in 1919 called America “my Zion and San Francisco my Jerusalem.”Unfortunately, the Holocaust calmed the ideological worries. As Adolf Hitler arose, American Jews accepted Zionism as the best response to Jew-hatred. By 1937, the Reform Movement adjusted its Columbus Platform, affirming the “Jewish people” and their “obligation… to aid” in “up-building Palestine as a Jewish homeland.”Of course, a Jewish National Home was not yet a state. In May 1942, Zionists from 18 countries met in New York’s Biltmore Hotel. Agonizing over “their fellow Jews in the ghettos and concentration camps,” the delegates revolutionized American Zionism. They endorsed a “Jewish commonwealth… as stated by President Wilson.” Invoking Wilson Americanized this new consensus while universalizing it: national self-determination would shape the postwar world.This process culminated when Harry Truman responded to more than 800,000 letters championing a Jewish State – and expressed the biblical respect for Jews his mother taught. Recognizing Israel ended decades of American Jewish fretting.Supporting the Jewish state as dramatically as President Truman did vindicated Justice Brandeis. Since 1948, American and Israeli interests have aligned; today supporting the Jewish state is, for all Americans, a patriotic act.Support for Israel – among all Americans, not just Jews – has surged since 1948. In March 1948, 28% of Americans favored the Jews in Palestine and 44% were neutral. Today American support for Israel exceeds 70%.American Zionism has matured. The success of Birthright Israel and other Israel experience programs in helping young Jews solidify their identities by visiting their homeland, makes Henrietta Szold’s “practical Zionism” existential too. Political Zionism – oppressed Jews need a state to save them – has become Identity Zionism. Assimilated Jews want this state to inspire them.EVEN A short history of American Zionism puts the perennial lament about declining American Jewish support for Israel into historical perspective. True, tensions persist regarding the Palestinians, Who is a Jew and other issues. Nevertheless, every year, tens of thousands of American Jews connect to Israel by visiting Israel – far more than ever before. Millions of now-Zionized Jews celebrate Israel as an example of how liberal democracies can flourish in an age when nationalism is often defined by its most close-minded, xenophobic impulses, not expansive, freedom-oriented ones.Zionism helps American Jews understand – and explain – Judaism’s unique mix of religion and peoplehood. Political Zionism, having rescued oppressed Jews globally and created proud New Jews in Israel, emboldens American Jews to stand up Israel and for other ideals they cherish. Modern Identity Zionism helps them appreciate that, with apologies to John F. Kennedy, Zionism is not just about asking what you can do for that country – Israel – but asking what having that homeland can do for you, right here in America.More broadly, all these Zionist ideas, implemented in the Jewish State, should remind disillusioned Americans about an essential American idea the Zionists embraced: liberal nationalism is a powerful, constructive force, elevating a scattered people into a productive people. Nationalism is not always xenophobia.In the 1930s and 1940s, Jews suffered from nationalism perverted by Nazism – offering a warning to all. Since 1948, Jews, like Americans, have benefited from nationalism tempered by liberalism, today offering an inspiration to all – even as, in both countries, much work remains to be done.