Israel is actively promoting cooperation with China and other parties under the Belt and Road Initiative. 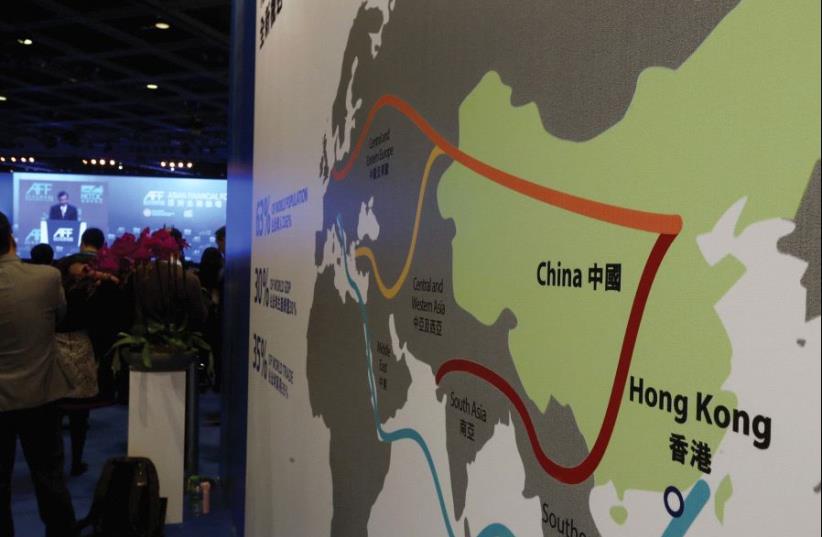 THIS MAP illustrates China’s ‘New Silk Road’ initiative
(photo credit: REUTERS)
Advertisement
Twenty-eight heads of government have confirmed their attendance at the Belt and Road Forum for International Cooperation in Beijing on May 14 and 15, the highest-level dialogue since the initiative was launched by China’s President Xi Jinping in Astana in September 2013. Economic cooperation is the top priority at the forum.China’s “New Silk Road,” with its aim to connect Asia and Europe with new and expanded trading links, will affect the economies of 64 countries, thereby providing a strong economic boost to development. The initiative is an opportunity for providing much needed infrastructure and trade at a time when global trade and commerce is facing strong political headwinds.The “New Silk Road,” or Belt and Road Initiative (BRI) as it’s officially called, covers nearly a quarter of global trade ($7.2 trillion in 2016) and includes 63% of the world’s population. But the BRI can do much more than simply promote trade and infrastructure development in areas covered by the initiative. The greatest promise of BRI lies in providing a framework for various countries, that do not usually have cordial relations, to actually work together or at least be parties in multilateral joint projects, thereby promoting development and stability in the Middle East.In recent years, Israel and China took steps to elevate the bilateral relationship to a new level. All areas of the relationship – trade, academia, tourism, media, culture, government and non-governmental contacts are booming, and talks on a free trade agreement are under way. The BRI is providing an opportunity for Israel, as well as other parties, to join in this new multilateral club and increase economic interdependence between the parties in the initiative.Israel boasts several advantages for China and other BRI participants. It is an island of stability in a turbulent region, it has demonstrated prowess in technology that China needs, and Israel is also adept in managing terrorist threats, which is an increasing concern in China’s western regions.Israel is actively promoting cooperation with China and other parties under the Belt and Road Initiative.For instance, Israel became a founding member of the Asia Infrastructure Investment Bank (AIIB), one of the vehicles created by China to fund the relevant projects.Israel is also active in welcoming Chinese enterprises to participate in various infrastructure projects in Israel. Israel is busy adding sea ports and new railroad networks, laying the groundwork for potential connections with the greater Middle East, as well as allowing Chinese companies to supply rolling stock, buses, and other components of infrastructure.For instance, China Harbor is building a new port next to Ashdod’s existing one, and the Shanghai International Port Group (SIPG) has won a 25-year license to operate another deep-sea private port planned in Haifa. As Transportation Minister Yisrael Katz noted at a recent meeting with the Chinese press, Israel views SIPG’s 25-year presence as a strategic one.One long-term plan that Israel hopes China could participate in is building a railroad connection between the port of Eilat and the port of Ashdod, connecting the Red Sea to the Mediterranean Sea, thereby providing a safe alternative to the Suez Canal, and creating an inland trade and logistics center for Chinese trade between Asia and Europe.And while the economic gains from the success of the New Silk Road are clear to all, the potential political dividends that may accrue, especially in the troubled Middle East, need to be emphasized more boldly.Take for instance the vision of connecting Israel and the larger Middle East in a network of trade and cooperation.Israel has added a rail line from the port of Haifa to Beit She’an, less than 10 kilometers from the border with Jordan. Israel has invited Chinese companies to take part in a project of extending further its north-eastern spur right up to the border with Jordan.From there, a short link to the Jordanian town of Irbid will enable connection to the Jordanian rail network and on to Saudi Arabia and the Persian Gulf.In a sense, this new rail network, that envisions a connecting link from the Palestinian authority, and can include an inland logistics and trade port in Jordan, is building upon the centuries-old Ottoman network, just as China is recreating the historic Silk Road.This international project led by multinationals is passing through countries that do not have diplomatic relations, for instance, Israel and Saudi Arabia, all under the China-initiated BRI umbrella.The population of the Middle East, currently around 350 million, is expected to double to 700 million within 25 years. The increased need for goods and services is plain to see. The project offers immediate economic benefits to all parties involved, and has the added advantage of putting aside the long-standing thorny political issues.The BRI faces numerous obstacles in spurring cooperation, finding the needed financial resources and overcoming political suspicion. Yet even without dwelling on the political issues that will not be resolved in the near term, the BRI provides an opportunity to strengthen economic development and stability, the most needed commodity in the Middle East. Let’s hope that all the involved parties will find the needed political resolve.The author is the founding director of The Chinese Media Center (CMC), at the School of Media Studies of The College of Management Academic Studies, Rishon Lezion, Israel, and a senior adviser to the Silk Road Group.