Evangelicals have become a dominant force of support globally for Israel. 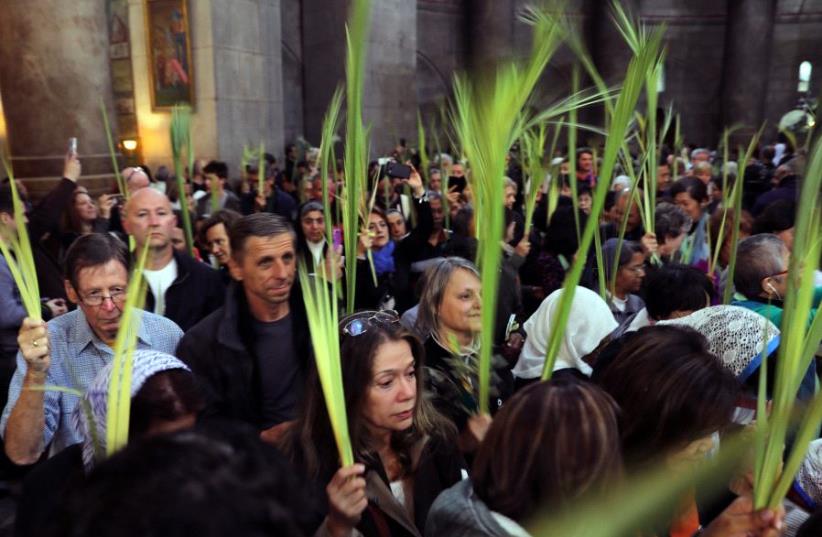 Christian worshippers take part in a Palm Sunday ceremony in the Church of the Holy Sepulchre in the Old City of Jerusalem
(photo credit: REUTERS)
Advertisement
The Feast of Tabernacles has become a magnet in Jerusalem, drawing tens of thousands of Evangelical Friends of Zion from every continent. They come to express their love for and solidarity with the Jewish people. The pilgrims come to pray for peace in Jerusalem and extend their blessings to Israel. They also celebrate the joy of Sukkot by marching in the streets of Jerusalem. They come from China, Germany, Russia, South Africa, Austria, Brazil, the United States, and more.These pilgrims are unapologetically pro-Israel Christian Zionists. Evangelicals have become a dominant force of support globally for Israel. Recently, when President Donald Trump visited Israel forty-seven billboards greeted him across the city of Jerusalem. They were sponsored by Mike Evans, founder of the Friends of Zion Museum in Jerusalem, and a member of the Trump Founding Faith Board. The Evangelical vote behind Trump’s pro-Israel stance was the largest turn-out in American history for any presidential candidate. It represented over 36 percent of the electorate.One of the most visible magnets in Jerusalem that draws Evangelicals is the Friends of Zion Heritage Center. The founding chairman of the museum was the late President Shimon Peres. He presented the museum’s award to many world leaders including former President George W.Bush and Prince Albert II of Monaco.The Friends of Zion Museum is enjoying capacity crowds; so much so that its doors are now open an hour earlier and remain open five hours later—from 8:00 AM to 11:00 PM. In two short years, its initiative has mobilized 28 million friends on social network globally. One of their initiatives is the Jerusalem Prayer Team which has 27,878, 323 friends and is the top Facebook site in Israel, the second being Gal Gadot (Wonder Woman) with 9,726,206.When asked to what he attributed the astounding success, founder Mike Evans replied, “Israel has always had these amazing friends. The only thing that has not happened in the past is that no one has taken time to activate and educate them. We are utilizing the social network to do so.That is the reason we created Israel’s first smart museum that uses videomapping and rotoscoping technology. It is connected to social networks.”When Evans asked Shimon Peres to be chairman, he replied, “Do you want to make friends? Let’s do it together. It takes so much less energy to make friends than enemies, and to sustain them.”Mike Evans is a #1 New York Times bestselling author with 72 published books. He is the founder of Friends of Zion Museum in Jerusalem.
sign up to our newsletter