Haftom Zarhum, an Eritrean migrant, was shot by a guard and beaten by a mob during a terrorist attack at the Beersheba Central Bus Station last month. 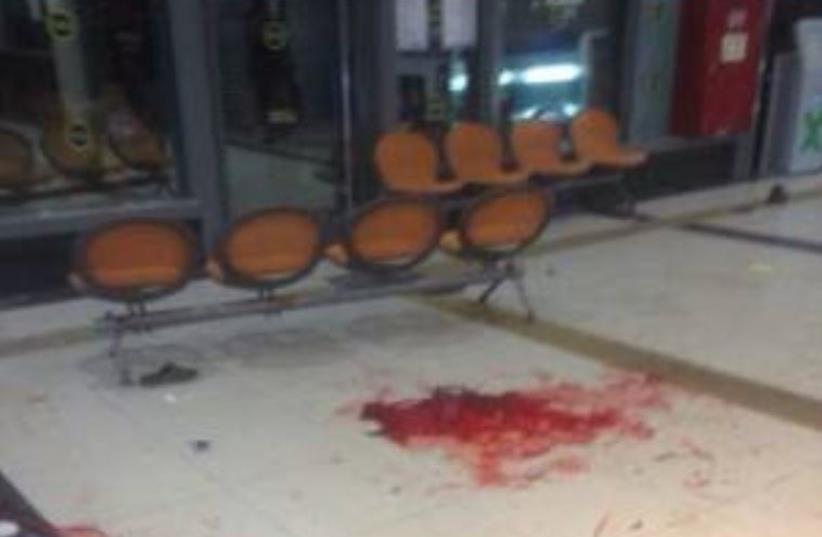 Blood at the scene where terrorist was shot at the Beersheba central bus station on October 18, 2015
(photo credit: ISRAEL POLICE)
Advertisement
One often hears about collateral damage in the military sense of the term these days, most often with regard to drone strikes, such as the one last month in Afghanistan that destroyed a hospital while targeting terrorists. But the term has filtered down from the realm of armed combat between armies to that caused, apparently inadvertently, during violence on a smaller scale, say during a terrorist attack.In addition to the intended victims of several recent terrorist attacks, several innocent bystanders were mistaken for terrorists and attacked by enraged mobs, with one lethal result. These attacks are sometimes explained away as being the inescapable result of the emotions generated by an attack – the danger, the fear, and the surge of adrenalin to defend oneself or to help others.But this explanation does not account for the fact that, at least in two recent attacks, the innocent bystander who was mistaken for a terrorist was perceived as such at that desperate moment because he was in one case an Eritrean and on another occasion a Beduin; in other words, an other. It is probably no coincidence that no Israeli of Polish or Russian heritage has been taken for a terrorist and lynched by a mob.Perhaps because of the growing frequency of terrorist attacks, one hears the term collateral damage used to describe the often inevitable result of the act of violence.Unlike the suicide bombings of the second intifada, the relatively less-violent, current stabbing attacks involve far fewer people – the terrorist and one or several victims.Collateral damage occurs when bystanders act to stop the attack and suffer injury themselves – or when they mistake an innocent person and try to beat him to death.Perhaps a better term would be collateral mortality.Haftom Zarhum, an Eritrean migrant, was shot by a guard and beaten by a mob – he died from the gunshot wound – during a terrorist attack at the Beersheba Central Bus Station last month. A Beduin man named Salem – an IDF veteran – is in the hospital recovering from a near lynching when he was mistaken for a terrorist during an attack Saturday evening in Kiryat Gat.The ongoing stabbing intifada is now yielding some new perspectives on familiar terms, all of them euphemisms that further dehumanize the conflict. The first, collateral damage, labels the loss of human life with an abstract term that says such violence is inevitable. It thereby insulates the perpetrator, or the mob, from any sense of individual responsibility or moral accountability.The second term, “friendly” fire, refers to the inadvertent death or wounding of one’s own comrades. There is nothing friendly about being killed by one’s own forces, although such deaths inevitably occur in wartime. But the multiplication of terrorist incidents and the ongoing tension along the Gaza border has increased the probability of “friendly” fire incidents occurring among our own forces.The most famous such incident occurred during the War of Independence, when the IDF’s first general, Mickey Marcus, was shot and killed at night by a sentry who mistook him for an Arab. But the ongoing war against terrorism has claimed more recent victims of “friendly” fire: a member of a police commando unit wounded during an arrest operation in Jenin last September; an IDF officer killed near the Gaza security fence in February 2014; a soldier killed in an Eilat terrorist attack in August 2011. The latter was saved when local resident Eyal Haddad bravely fought off the crowd and protected him.The third term that has crept into the discourse in Orwellian fashion is “neutralizing.” One might think that such a term would be say, neutral, and refer to disabling an attacker and thus preventing future harm. But in ever-increasing news reports, the term is used as a euphemism for killing the terrorist.If a person rises up to kill us, Jewish tradition teaches, we are morally obligated to kill him first; not to “neutralize” him. Such a term dehumanizes the act of self-defense, removes it from the existential reality of violence when it must be employed for self-preservation. The totalitarian terrorist does not seek to neutralize his victim, but to exterminate him.We are called upon, with great reluctance, to defend ourselves by resorting to necessary violence; but we must do so by keeping collateral damage to a minimum, by carefully directing our fire, and by preserving our humanity.