Comment: Drilling for hard truths in the stalled gas deal

The Start-Up Nation looks today a bit more like a banana republic, and we’re all to blame. 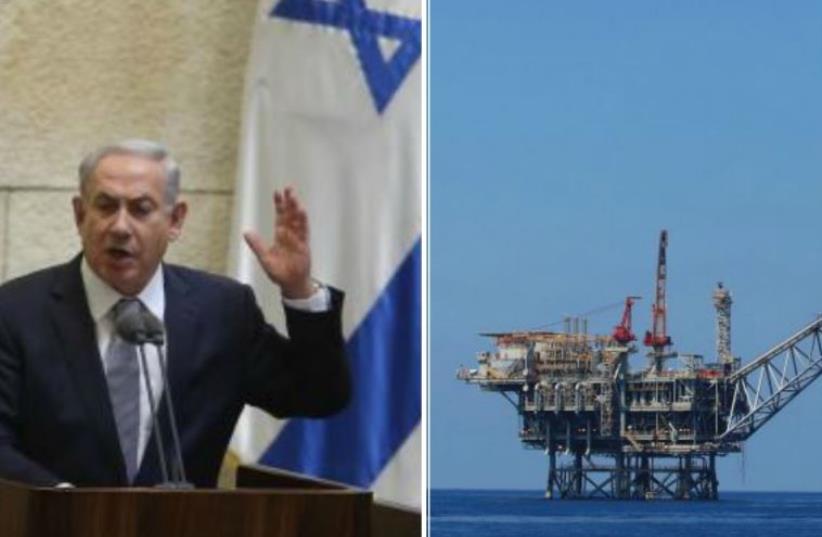 Prime Minister Benjamin Netanyahu confronts High Court to defend natural gas policy in unprecedented personal appearance.
(photo credit: MARC ISRAEL SELLEM)
Advertisement
Israel’s energy needs, ruled the High Court, cannot be fueled by unchecked political power.Prime Minister Benjamin Netanyahu made the passage of the gas deal a signature economic initiative of this government – and even appeared before the High Court in an unprecedented appeal to the judges. The court, like many citizens and environmental groups who turned up at rallies opposing the deal, smelled something fishy in the deep waters of the Mediterranean and the deep pockets of the gas lobby.Now the prime minister has a year to try to clean up the rigged deal, an unenviable task in the face of angry international and local investors. The government’s narrow 61-seat coalition is already teetering from a toxic mix of haredi (ultra-Orthodox) dissatisfaction with the Western Wall deal and Likud rebels justly demanding Ethiopian aliya.The “Start-Up Nation” looks today a bit more like a banana republic, and we’re all to blame.The main culprits are all of us, the customers of the Israel Electric Corporation, who carelessly enjoy cheap and historically dirty power, without demanding any political accountability for the unsustainable NIS 70 billion debt of the utility and the anti-renewable energy policies of the government. Our silence has literally been bought by subsidized power, so there is little accountability for the power we consume or bestow.Following apathetic customers, the politicians are to blame. Each energy and finance minister in our revolving-door leadership gives in to the populist temptation to lower electricity prices, rather than following sound energy and economic policies with a long-term outlook.Best practices are to keep energy prices steady and use whatever savings from natural gas to pay down our collective massive energy debt, invest in our inadequate infrastructure and transition to a green-energy economy.The switch from burning coal to burning gas is certainly an improvement in terms of reducing greenhouse gas emissions, so environmentalists shouldn’t party too hard at the court decision.But if the government was truly concerned about reducing emissions rather than appeasing tycoons and their friends, the National Infrastructures, Energy and Water Ministry would cancel plans for another fossil fuel-burning plant at Ashkelon, ban the use of coal and heavy fuel and stop the drilling for oil in the Golan. The Finance Ministry would tack a progressive carbon tax on all emitters, the Public Utility Authority (the regulator) would lift all absurd quotas limiting solar energy, the Tax Authority would eliminate obstacles for home-based solar, the Transportation Ministry would mandate 100 percent hybrid and electric car and bus use by 2020, the Environmental Protection Ministry would impose carbon scrubbers on the smoke-stacks and push for a free charging network for electric cars.And the Knesset, whose roof is famously decked with a great solar installation, would pass legislation banning the building of any additional power plants that burn fossil fuels, paving the way for solar, wind, biofuels and more.None of these were done in the past years because decision makers and bureaucrats were intoxicated by the gas.And some were intoxicated by power.This prevented the country from making enlightened 21st-century decisions about Israel’s energy policies. And this jeopardized our energy security.When a government is sober and thinking clearly, especially one obsessed with security, how could it bulldoze forward a plan – apparently in an unconstitutional way – to have 70% of the country’s energy be dependent upon a 150-kilometer, deep-water gas pipe in a fault and war zone? In an age of daring terrorism and long-range missiles, a healthy and diverse energy mix is the obvious rational energy policy. The smell of gas and money has so clouded decision making that our grid can be melted and essentially eliminated within a split second by a crude electro magnetic pulse (EMP) device from any one of our many enemies – a threat this right-of-center government has failed to address because it is not plugged into the real energy security solutions for the state.And at a time when Hamas and Hezbollah rockets can reach every power plant in the country, this supposedly security-minded government undermines the energy policies that promote distributed solar on roof-tops and fields spread strategically across the country that provide better energy security than another gas-powered sitting-duck target.Israel’s energy policy going forward should be quite simple and be based on the positive example of how the communities in the Arava are powered. Despite the government’s actions to undermine the solar industry, from Eilat to the Dead Sea, 60% of the day-time power is being delivered by the sun and this will reach 100% by 2020.During the night, and the occasional cloudy day, the national grid kicks in.The night grid should be powered by natural gas at rational prices until Israeli ingenuity can solve the technological challenge of storing large amounts of solar power for night use. Instead of a cowardly target of 17% renewables by 2030 – bought by the gas lobby and their allies – Israel could be at least 50% powered by the sun and probably closer to 100% when storage is economical. We’ve already proven it in the Arava.The prime minister would be wise to resist bamboozling a technical fix to the gas deal through the Knesset and Cabinet and instead use this opportunity to have Israel’s energy policy finally shine.Failure to do it right will only reduce his power by generating more negative energy – something his government, and all of us, truly cannot afford.The author served on the Israeli negotiating team at the Paris Climate Conference and is one of the founders of the solar industries in Israel, East Africa, West Africa and elsewhere. He currently serves as CEO of Energiya Global Capital and can be followed @KaptainSunshine.