Many Jews face the fiftieth anniversary of the Six Day War with ambivalence. 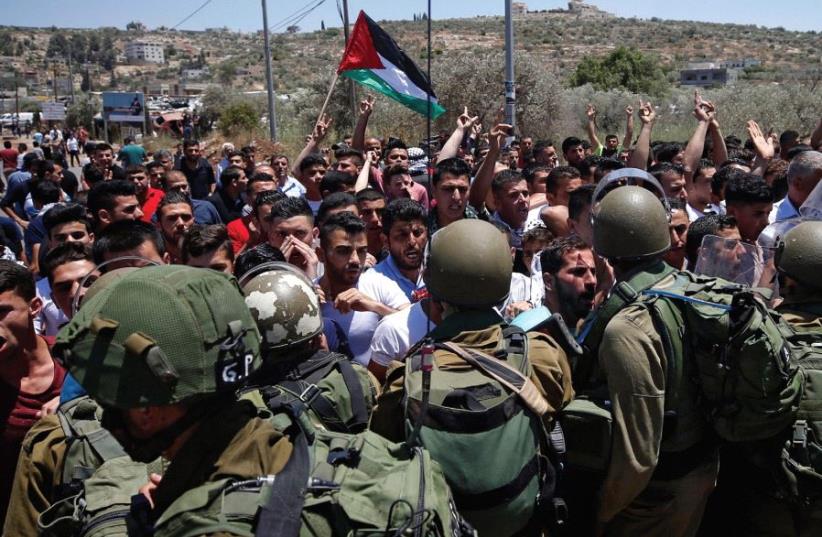 SOLDIERS TUSSLE with Palestinians in the West Bank village of Beita
(photo credit: REUTERS)
Advertisement
When the Six Day War broke out, my father was living in Reno, Nevada, with a new baby (my older sister). He was not involved in any Jewish community there. He was an atheist. He’d never been to Israel in his life.But on June 5, 1967, it seemed to him that the new Jewish state was about to be destroyed by the surrounding Arab armies. And so my father surprised himself by trying to book a flight to Tel Aviv to do whatever he could to help defend Israel. The war was over so quickly he never made it here. I was born a year later, and moved to Israel 25 years after that. When I first moved here, my father told me his 1967 anecdote, and he’s repeated the story several times over the years, each time marveling at his visceral, instinctive response to drop everything and come to the aid of Israel in the face of what he saw as an existential threat.My father’s response was not unique.His anecdote illustrates the broader connection between Jews around the world and Israel. Even for those who do not chose to live here – even for those who have never even come to visit – Israel occupies a special place in their thoughts. When they see Israel in danger, instinctively Jews come to its aid.Many Jews face the fiftieth anniversary of the Six Day War with ambivalence.Those who lived through it remember the joy of Israel’s decisive victory. Yet for most Jews, that is ancient history and the legacy of that war is much more polarizing.Some celebrate the return to the biblical heartlands of the Jewish people, but many others are aware that Israeli presence in those lands comes at a very high price.The West Bank was never annexed to Israel and its Palestinian inhabitants are not entitled to the social and political rights guaranteed to all residents of Israel.For years, Israel explained the contradiction of a democracy maintaining military rule over millions of people who are not part of the democracy by arguing that the situation was temporary.The fiftieth year calls into question this definition. There’s no legal definition of temporary (and objectively not much difference between 49 years compared to 51). Still it is hard to argue that half a century – with a second and even a third generation of Israelis and Palestinians now born into this situation – is a temporary situation. It is even harder to claim the situation is temporary when the current Israeli government includes many who explicitly state their intention to make Israel’s presence in these territories permanent.Author and public intellectual Amos Oz was one of the very few who understood almost immediately the potential dangers inherent in Israel’s rule over these territories and this population. “I have fears about the kind of seeds we will sow in the near future in the hearts of the occupied,” Oz wrote in August 1967.“Even more, I have fears about the seeds that will be implanted in the hearts of the occupiers.”These words have proved sadly prophetic.Fifty years later we see the disastrous implications of the occupation on the Palestinian population. Palestinians in the West Bank see settlements encroaching ever further into their lands, leaving few opportunities for development. Military orders govern all aspects of their lives. Increasingly Palestinian youth embrace violence against the Israeli military and against Israeli civilians to express their frustration.The situation in Gaza is even more dire, under a siege, cut off from the West Bank and the rest of the world, with military hostilities with Israel every few years that leave thousands dead and massive destruction.But the occupation is disastrous for Israelis as well as Palestinians. It is harder to see it – our cafes are full. The economy is doing well. In fact, most Israelis don’t see the occupation at all, but its cost for Israeli society touches every sphere of life. The costs include the deaths and permanent injuries as a result of the conflict, the need to take care of the wounded, the stress and trauma, the constant fear of terrorist attacks, the economic burden of military conflict and lost economic potential and the harm to Israel’s international standing.And as Oz predicted 50 years ago, the occupation has also planted in the heart of Israeli society seeds of nationalism, polarization and erosion of democratic principles.Today Israel has one of the most powerful militaries in the world, and peace treaties with two of the neighbors it fought in 1967. Yet some argue that the threat posed by Israel’s continued rule over the Palestinians endangers Israel’s future no less than hostile armies massing on our borders. We are in danger of losing either the Jewish or the democratic character of the state, Israel’s very raison d’etre.In the face of this danger, will Jews around the world rally once again and come to our aid? The author is a leading figure in Israeli civil society and the director of a Diaspora-Israel partnership called SISO: Save Israel, Stop the Occupation.