Jews could never simply ignore the world around them. And if they did so, it was at their own peril and ignorance. 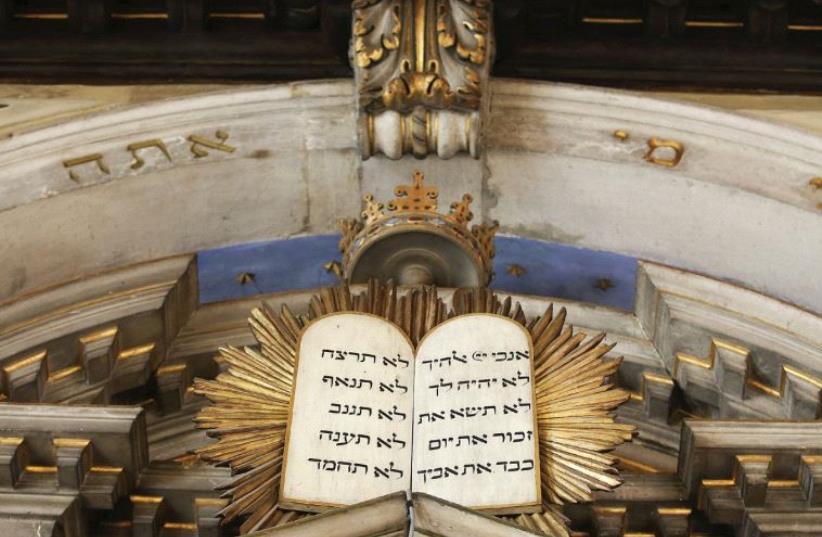 A depiction of the tables of the law in the Levantine synagogue
(photo credit: REUTERS)
Advertisement
Yitzhak “Fritz” Baer, an eminent German-Jewish historian of the 20th century – he made his mark at the Hebrew University in Jerusalem – painted a stark contrast between medieval and early modern Ashkenazi and Sephardi civilizations, For Baer, the central and eastern European Jews represented a folk piety that idealized martyrdom, in contrast to the Jews of Spain and Portugal who were acculturated to the point that they converted to Christianity in large numbers due to the weakening force of their encounter with Plato and Aristotle.While Baer was an expert on the Jews of Christian Spain, his Ashkenazi roots likely prejudiced him against a Sephardi culture that was not as assimilated as he imagined. It is true that the Ashkenazim were more insular and Talmud-centered than their brothers in Spain, but the case of David Gans complicates the clear-cut dichotomy between the pious Ashkenazim and the philosophy-centered Sephardim.In the realm of Jewish historiography David Gans was neither as daring as his older contemporary Azariah dei Rossi in Renaissance Italy or as groundbreaking as his successor Heinrich Graetz in 19th-century Germany. But his chronicle, Zemach David (“The Plant of David”), represents a departure from the way Jewish history had been composed and also represents a rather worldly Ashkenazi Jew. Perhaps the greatest influence on Gans was his teacher, the Maharal of Prague, a rabbi ahead of his time, especially in his call for religious tolerance and his mystical and philosophical insights. The Maharal attacked Azariah dei Rossi’s Meor Eynayim (“Light to the Eyes”). Although this polemic tamed Gans’ approach in his writing of history, his work could have been in conflict with his teacher’s attitudes toward historiography in the Jewish world.According to Prof. Michael A. Meyer’s study of Ideas of Jewish History, there is little that is innovative in the first part of Gans’ work. Gans provides the reader with a Jewish history from Adam until the publication of Tzemach David in 1592. The early modern author’s focus is on the chain of rabbinic tradition and the dates on which rabbis published their most important works. He also focused on persecutions of the Jews.In contrast, Azariah dei Rossi was far more daring in challenging the traditional writing of Jewish history, if chronicling the chain of rabbinic tradition can even be called “history” as we understand it today. The innovation that marks Zemach David is Gans’ chronicle of world history as a parallel to his conventional Jewish history. Gans follows chronology using the dates of the Christian calendar, highlighting such events as the conquests of Gengis Khan in the Muslim Middle East in 1210. Ironically, the Jewish faith of the author sabotaged an attempt at writing a comprehensive Jewish history and allowed him to be much more flexible when dealing with non-Jewish history.Why did Gans write a parallel world history to the Jewish chronicle? His most convincing argument was that “The incidents related here give abundant evidence of Divine Providence watching over the people of Israel. For great and mighty kings conquered other states and kingdoms – destroyed, uprooted and annihilated them so that not even their memory remained. But God, the Blessed and Exalted, protected us and did not let us be destroyed by them. He always fulfilled his promise to defend us.”Perhaps the reasons Gans provides are simply a way that a Jew open to the larger world tries to explain why. The same question can be asked of forerunners of modern Zionism such as rabbis Alkalai and Kalischer, obviously influenced by the political currents of their time but knowing of no other way to express it but in the traditional theology of the messianic idea. Gans was a scholar with a keen interest in astronomy, a Jew who was in contact with Johannes Kepler and Tycho Brahe, the author of a treatise that disputes Copernicus and the concept of a heliocentric solar system. Gans was a man standing in the world of the Maharal and Moses Isserless but with one foot planted firmly in the larger world. While providing traditional reasons for writing a world history to parallel that of the Jews, his interest in the world was a coming of age. It was a harbinger of the later entry of the Ashkenazi Jew into wider world history.Even if Gans were an exception among the Ashkenaz, he does not fit in quite easily to historian Baer’s understanding of folk piety among Jews in the German lands and Poland versus the assimilation of the worldly Jew of Spain. Jews could never simply ignore the world around them. And if they did so, it was at their own peril and ignorance.

The author is rabbi of Congregation Anshei Sholom is West Palm Beach, Florida.