Days of catastrophe in Baghdad

Two days in 1941 led directly to the violent expulsion of 120,000 Iraqi Jews from their land, the confiscation of their property and possessions. 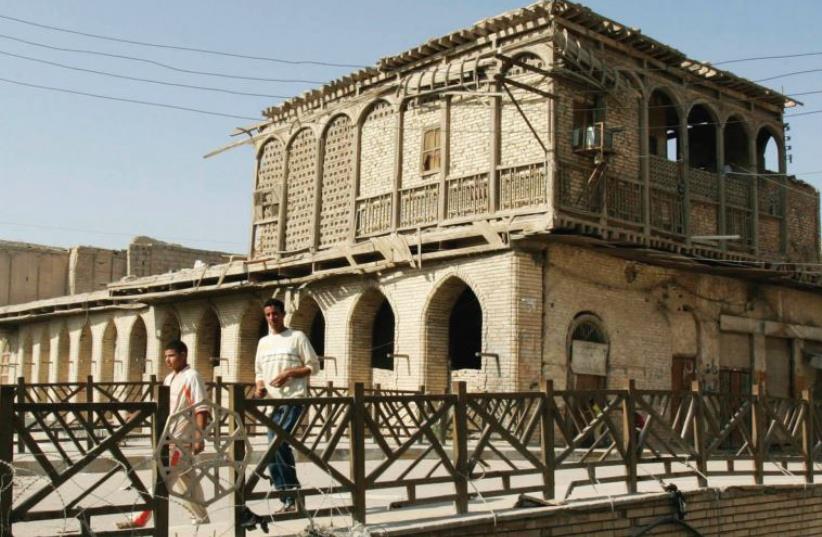 An Iraqi walks past a traditional house in Basra. In 1940, Jews of Iraq suffered an unprecedented pogrom that affect communities in Baghdad, Basra and elsewhere.
(photo credit: REUTERS)
Advertisement
In May 1941, my grandparents’ Muslim neighbors sent over a tray with sweets for the Jewish holiday. My grandmother tells me how much she loved and appreciated her Muslim neighbors, and could not have been prepared for what was coming.Hela, my grandmother, is a loving, generous, caring Jewish mother.Despite the persecution of my family in Iraq, she doesn’t speak a lot about her past. It is challenging to get any negative stories from Iraq out of her. She prefers to tell me stories about how great it was, how beautiful Baghdad is, and how they always felt safe – until the two days of horror: June 1-2, 1941, known as the Farhud. To me, this event signifies the days of catastrophe; the start of a Jewish “Nakba” (catastrophe) that no one wants to acknowledge. These two days led to my family becoming refugees.“Farhud” means brutal intimidation of a population by its ruler, but it seemed more than just the rulers turned on the Jewish population of Iraq during those days in 1941. My grandmother always told me the story of the cafe that she spent her days at, a beautiful little shop, she said. On the first day of the farhud she was there. She tells me how she saw an Iraqi Muslim man screaming “kill the Jews,” and a Jewish woman walking across the street with her seven young children, one in her arms. The man pointed the gun at the woman and began shooting her kids. One by one they were murdered, as the mother screamed. Only after he murdered all of her children did he kill her. Quickly, the cafe owner hid my grandmother in the back of the store, until her father came to take her, running back home.That night, she couldn’t sleep. She and her family hid at her Muslim neighbor’s home. The terrible noises from outside – screams, cries, shattering glass – made it into one of the most terrible nights of her life. When morning came, they were all relieved, thinking that the horror was over. They were wrong.At noon, she was sitting on the porch at her house while her mother was out getting food and her father was at the neighbor’s home. Suddenly she saw Dalia, a Jewish teen with mental disability, walking down the street. She called out to her from above, urging her to go back home. Dalia didn’t listen.Moments after, an Iraqi Muslim man saw Dalia and walked over to her. When he realized that she was mentally disabled, he started raping her. My grandmother was paralyzed by shock and fear as she witnessed the attack. The young girl was screaming. After he was done with his sickening act, he took a glass bottle, broke the bottom half on the floor, and wounded her genitals. My grandmother, inconsolable, couldn’t speak to anyone that day. Though she survived the bloody massacre that day, the Farhud reminded the Jews in Iraq of “their place” in Iraqi society.These two days in 1941 led directly to the violent expulsion of 120,000 Iraqi Jews from their land, the confiscation of their property and possessions, valued at an estimated $300 million, and the denial of their basic human rights and dignity. My family was part of 850,000 Jews from the Middle East and North Africa that were forced out of their countries following the rebirth of Israel. They are the forgotten refugees that returned home, to Israel.Zionism was always in the background of my family’s life, they prayed every day to return to Jerusalem – but not this way.It seems like when it comes to the systemic persecution of Jews in Iraq and the Arab world, some “experts” feel the need to whitewash the crimes of the Nazi-supporting Arab regime. This is why I write this: I ask you to speak.Speak about the crimes of the Farhud, be the voice of Dalia and of the Jewish mother and her seven children. Be the voice of the 200 Iraqi Jews that were killed in these two days of catastrophe.Be the voice of the 250 Jewish children that lost their parents that day, and of the 2,100 Jews that were wounded and over 50,000 that lost their property. It doesn’t matter of what faith you are or your background; this is not an exclusive issue for Iraqi Jews, or just for Jews, it is an issue for all people of conscience.Today, as a 26-year-old Israeli, I see how many groups of refugees are embraced by the international community.I see young activists rallying for them, and mainstream media covering their struggle. I see even how those who are descendants of refugees are internationally acknowledged as “refugees” despite the fact they do not fit the definition of refugees in the slightest.Yet, in Arab-Israeli conflict, the Jewish refugees from Arab countries were never compensated and not one of the Arab states which committed these crimes has owned up to their despicable actions. These refugees were never even acknowledged as refugees by the international community. For my grandmother, I will continue talking about it whenever I can, because where there is no acknowledgment, there will be no justice. Where there is no true justice, there will never be real peace.The author, who lives in Tel Aviv, is an Israeli-born international speaker, writer and an activist. He was in the IDF for almost five years serving as a humanitarian affairs officer in the COGAT unit in the West Bank. His family came to Israel from Iraq and North Africa in the early '50s. @HenMazzig