We are convinced that the memory of our fallen and the common victory over Nazism has always been and will continue to be a uniting factor. 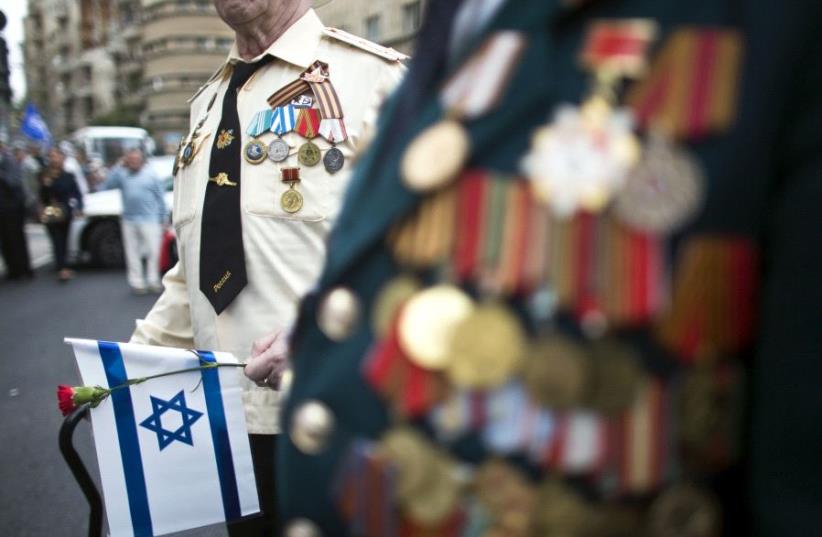 A World War Two veteran holds a flower and Israel's national flag during a march in Jerusalem commemorating the 70th anniversary of VE (Victory in Europe) Day May 10, 2015
(photo credit: REUTERS)
Advertisement
We sincerely congratulate you on the 73rd anniversary of the victory over Nazi Germany.This year Israel for the first time in its history celebrates May 9 as an official holiday, following the adoption of the relevant law by the Knesset in July 2017. The Knesset thus clearly demonstrates its recognition of the decisive role of the Red Army of the multinational Soviet Union in the liberation of Europe from unprecedented evil, and the Jews – from annihilation. Moreover, it is an unambiguous signal to those who falsify historical facts, whitewash Nazi butchers, and blacken victims and liberators for opportunistic political reasons.It is obvious that the assessment of that war to a large extent determines the worldview of entire states, the basis for their future, as well as their attitude toward other nations.We are convinced that the memory of our fallen and the common victory over Nazism has always been and will continue to be a uniting factor, a solid historical value contributing to cementing ties between Belarus, Kazakhstan, Russia and Israel, as well as building productive interstate relations and developing cooperation in the international arena.Dear veterans! Israelis!
On a bright holiday like this we wish you peace, security and prosperity!
Congratulations on the Great Victory!
Vladimir Skvortsov is ambassador of Belarus in Israel
Doulat Kuanyshev Ambassador of Kazakhstan in Israel
Alexander Shein Ambassador of Russia in Israel