Denial of access to Torah scrolls for egalitarian worship in Israel

If the reason young American Jews connect to Israel is because of their Jewish identities, this rejection of the Jewish identity they have developed in our school community is bound to distance them. 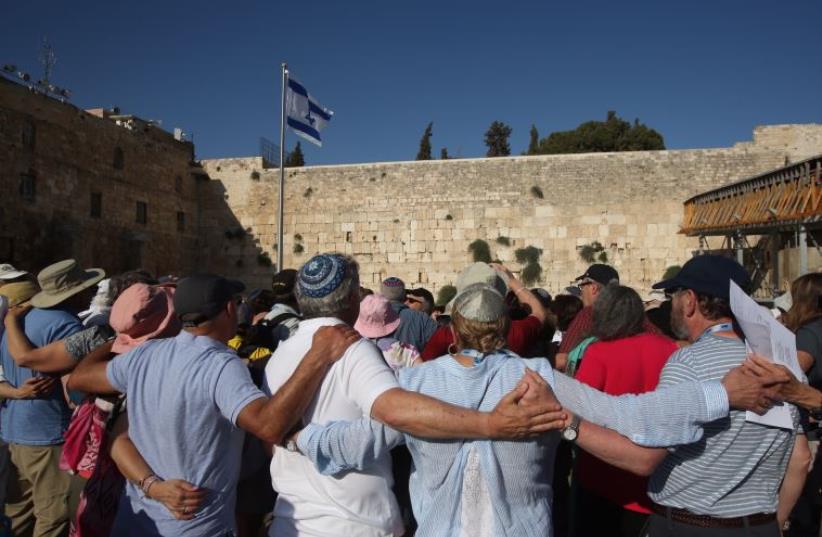 Egalitarian prayer rally at the upper plaza of the Western Wall
(photo credit: MARC ISRAEL SELLEM/THE JERUSALEM POST)
Advertisement
On Rosh Hodesh Iyar, the 8th grade students of Schechter Manhattan came up against a difficult reality for Jews like us as we try to connect with Israel. At a kibbutz the group was staying at in the Galilee, they were told that would not be able to use the Torah scroll. The mashgiach, who certifies the kashrut of the kibbutz’s kitchens on behalf of the state rabbinate, had informed the kibbutz leadership that, if they were to allow the kibbutz synagogue or Torah scrolls to be used by any non-Orthodox group, especially egalitarian groups like ours, that include all genders equally in the rituals, their guest house would risk losing the kashrut certification that allows them to bring in guests – including us.Our students were in the midst of a two-week Israel study tour. Throughout the trip our students pray each day. On days when it is traditional to do so, they read from the Torah, and our planners know to arrange, wherever they are in the country, to have a Torah scroll available. They had made advance plans with this guest house, as they had often in the past. So the refusal was a disturbing surprise. The kibbutz leaders were unhappy about being held hostage by the mashgiach, but they did not feel they could risk standing up to the rabbinate’s authority. On the first day of Rosh Hodesh Iyar our students prayed without a Torah scroll, for the sole reason that our expression of Judaism was not considered legitimate enough to use the Torah scroll available.The mashgiach at this kibbutz is not a lone actor.Moshe Gold, the director of the Ramah Israel Institute, our partner organization in Israel, told us that they were having this trouble with a number of the other groups they were working with. By the second morning of Rosh Hodesh our friends in the Ramah offices had found another Torah scroll our group could use; but just a few days later the students were denied access to the scroll at another kibbutz near Jerusalem, again because of our egalitarian prayer practice.In fact, on the very same morning of Rosh Hodesh Iyyar, Haaretz reported that a group organized by a yeshiva in Jerusalem took over the Western Wall’s Ezrat Yisrael, the special space designated for men and women to be able to pray together, and set up a large barrier to separate men from women. Reform and Conservative Jews, as well as Israel’s small but growing egalitarian communities, got a clear message. The rabbinic establishment in Israel doesn’t just disagree with us, it thinks we have no place in the State of Israel.As the head of the Solomon Schechter School of Manhattan, I am working hard to convince American Jews to support Israel. I am trying to inculcate in my students a sense of deep connection to the land, people and State of Israel. I aspire for the students to see the story of the Jewish state as their story, and for their Zionism to be an integral part of their identities.This is not easy work. The forces and voices that seek to delegitimize Israel abound, and they appeal to my students’ senses of fairness by presenting a narrative accusing Israel of occupation and imperialism. If my students are going to withstand this sort of opposition to Israel they will need to have such strong commitments to Israel that they can see past anti-Israel rhetoric and stand up for the Jewish People’s, their people’s, right to sovereignty and safety. And they need to feel that the State of Israel cares just as much about them.Research shows that this sort of commitment to Israel is nurtured through the development of strong Jewish identity. In the 2014 study “Hearts and Minds: Israel in North American Jewish Day Schools,” Pomson, Wertheimer and Wolf conclude that “Students’ connection to Israel grows from their relationship to the Jewish people... Put differently, the road toward engagement with Israel runs through students’ relationships to other Jewish collectives, wherever they are found.”Our mission at Schechter Manhattan is to nurture our students’ relationships with our Jewish collective, our warm, vibrant, authentic, religious, Jewish community.And we teach them that their relationship with their Jewish community, and their very identities, includes an ancestral homeland, the State of Israel.The denial of access to Torah scrolls for egalitarian worship when we bring our students to Israel undermines our Jewish educational efforts to build up their sense of identification with Israel. While we’re trying to tell them that Israel is an extension of their Jewish identities, what they hear from Israel’s own religious representatives is the opposite message: your Judaism, your Jewish identity, is not legitimate here. The official religious authority in the Jewish state doesn’t just fail to recognize the religious community that our students have grown up in at Schechter Manhattan; it holds it in contempt and works to oppose its expression.If the reason young American Jews connect to Israel is because of their Jewish identities, this rejection of the Jewish identity they have developed in our school community is bound to distance them from Israel.Why would they feel connected to a country and culture that rejects them? Why would they see the story of Israel as their story? And if it is not their Jewish story, why would they care about Israel? The continued suppression of Jewish religious pluralism in Israel has a cost in hearts and minds of young American Jews. If Schechter Manhattan students, and students like them throughout North America, are made to feel that their Jewish communities, their very religious identities, are devalued and rejected in the Jewish state, they will not sustain positive connections with Israel.The author is the head of school of the Solomon Schechter School of Manhattan.