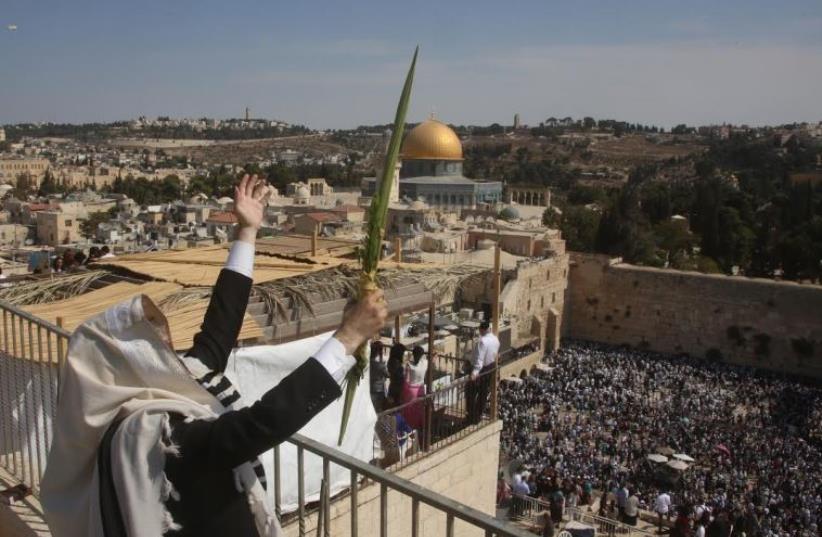 Man holding lulav.
(photo credit: MARC ISRAEL SELLEM)
Advertisement
A wise man once said that the way to arrive at unity is to ignore all differences between men and to focus on that which we have in common.No doubt that seems sensible, but the lessons of the Four Species of Succot teach us otherwise.In Jewish thought, the etrog, lulav, hadas and arava are each assigned very different human character traits based on their taste and smell, or lack thereof, and in order to fulfill the mitzva we are told to bind them together as one. We fully recognize the differences and identify each unique characteristic, yet we still bind them together as one.There is certainly value in seeking a comfortable higher common ground, but true unity can only be achieved when we recognize, yet celebrate, our differences.This lesson was hammered home for me while raising my son Yossi. He was injured by a faulty batch of vaccine at the age of 11 months in 1977 that left him blind and deaf and later affected his ability to walk and hence his need of a wheelchair. Much like Helen Keller, Yossi had an astounding breakthrough at the age of eight, via Hebrew letters signed into the palm of his hand, and later developed speech. He began to connect to the world around him in his own special way.For our family Yossi was nothing unusual, just one of the boys who did things differently but was a part of every growing experience. Naturally one of our grave concerns was how society will relate to him. Will they measure him only by his disabilities or will they be able to see his unique abilities.Today, when Yossi is 38, I can answer that question positively. The very real love and friendship that Yossi has enjoyed from an enormously broad spectrum of peers who are an integral part of his life never ceases to move me.Yossi works, travels and enjoys a full life, with so much warmth that he views his role in life as bringing joy to others. I can’t help but notice the interactions of his co-workers at the Route 6 headquarters where he packages items with skill and efficiency that matches theirs.Yes, there is something to be said for focus without distractions. The intensity of his physical workouts, including weights with his trainer in a large Jerusalem fitness center alongside other clients, doesn’t raise an eyebrow. He is just another guy. His friends love doing exciting things with him, whether that be visiting vineyards in France, riding elephants in Thailand or just lazing around in the hot springs near Tiberias and then relaxing at a bar, which at Yossi’s request should overlook the lake. Yossi’s challenges are evident and clearly, he needs the tools to cope and overcome them, but the critical factor is that he is an equal, and this is unity.When we opened SHALVA 25 years ago, we did so with the goal of providing children with disabilities opportunities for normative social lives with friends as well as enabling their families to stand tall and be proud of their children’s abilities. There was however an initial major hurdle – society’s unwelcoming outlook to people who are different.Over the years SHALVA joined a broad coalition to alter those views which made it clear that people with disabilities don’t need anyone’s favors, but rather just their basic civil rights to partner in society to the best of their ability.While such prejudice still exists, it is certainly no longer socially acceptable.In less than a year, Shalva will G-d willing open the largest and most advanced center in Israel for people with special needs; it is currently being completed in the heart of Jerusalem. It excites me to think about youngsters with disabilities and their typical friends enjoying world class facilities together. Whether it be sport, music, art, accessible playground equipment, or nature trails in the large, inclusive park surrounding the center, one thing is clear: These typical children will grow up viewing people with disabilities as they do any friend, and certainly not as “the other,” and we will not have to lecture to them on the subject. This is the unity to which the binding of the four very different species of Succot aspires.

Kalman Samuels is the founder and chairman of SHALVA – The Israel Association for Mentally and Physically Challenged Children and their Families. Write to kalman@shalva.org www.shalva.org