I have never, not once, seen a situation of separate seating where women were assigned the more advantageous seats. 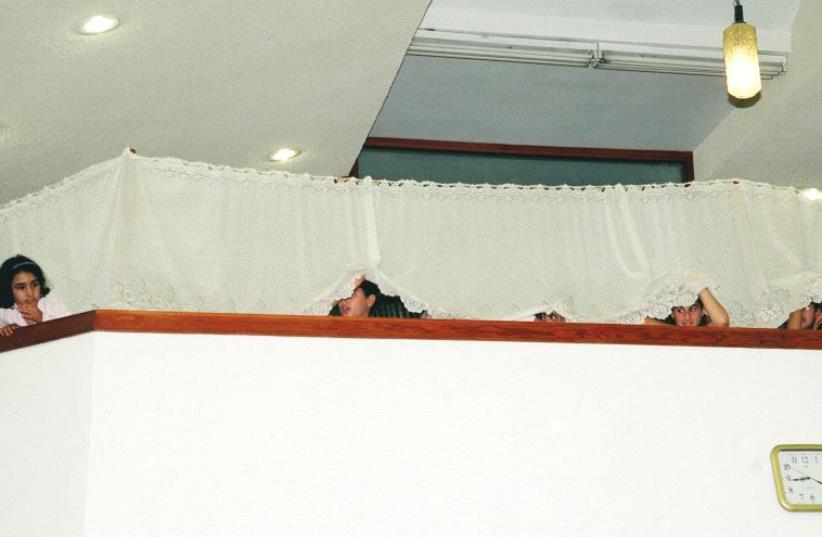 Jewish separate seating
(photo credit: Mark Neiman/GPO)
Advertisement
I recently attended an informal community meeting, held in a private home in the national-religious neighborhood where I live.Upon arrival, I went to take a seat near the screen, where the first slide of the presentation was displayed.The speaker approached me during the presentation and said, “It’s separate seating. Men in front.” I replied, in an indignant voice, loudly enough for the entire living room to hear, “You have got to be kidding me!” There were times where women in the back asked, “Can you repeat that?” and “Can you make the slide any clearer?” Afterwards, I wrote to the presenter, to thank him for sharing his knowledge with our community. Then, operating on the assumption that he, like many religious men, had no idea how often separate seating disadvantages women, I took the opportunity to sensitize him.I explained that Jewish law does not require separate seating at a general community event. I pointed out that it was offensive to have claimed the better seats for men, thereby forcing women to sit in the back of the room.His response? “The reason why men were in front is so the men will not gaze at the women.”I lost it.There are two issues contributing to the increase of separate seating events in the national-religious community.First, there is a false perception that separating men and women is religiously superior. It may give the appearance of piety, but it comes at a cost. And that cost is borne by women.It’s wrong to impose separate seating at events when Jewish law doesn’t require it. My husband and I won’t attend celebrations where men and women sit separately for the meal. If we set aside time to attend a simha, why would we want to spend it apart? What inappropriate behavior does anyone think they are forestalling by separating husbands and wives? Additionally, as a community, we squander the opportunity for singles to meet in a kosher environment by seating men and women at different tables.There’s nothing in Jewish law that requires this degree of separation. It’s a kind of false piety that makes Judaism much less appealing to the modern Jew who, in all other ways, interacts fully with society.The second issue I have with separate seating at non-prayer occasions is far more odious and needs to be completely eradicated. I have never, not once, seen a situation of separate seating where women were assigned the more advantageous seats. If anyone is disadvantaged, it is always the women.A second anecdote. My husband and I went to a Jewish music concert. Men were assigned two-thirds of the room with seats facing the musician. Women were seated sideways, behind two rows of tables, at the far end of the room. And women paid the same entrance fee, despite the fact that men had preferential seating.It puzzles me that, in a religious system that teaches extreme sensitivity to other living creatures, to the extent that we must feed our domestic animals before we sit down to eat, this lack of derech eretz (considerate treatment of others) toward women happens so often.A third story to hammer the point home. My husband and I attended a community lecture held in an Orthodox synagogue. The organizers imposed separate seating. Instead of putting men on one side and women on the other, they seated men in the main part of the synagogue, next to the speaker’s podium.The very best seat for a woman was on a metal folding chair in the back of the men’s section, 20 rows from the speaker. In a case of supreme irony, the lecture topic was derech eretz.What is this blind spot that prevents people from seeing how often separate seating disadvantages women? And why do women tolerate it? It’s time to put an end to the insidious practice of separate seating, outside the context of public prayer, at events in the national-religious community.To men, I ask you to stop and consider whether, at the next separate-seating event you attend, you would be content to switch places with the women. If the answer is no, it’s a certainty that the women have been relegated to disadvantageous seating.If you happen to be a man who has taken upon himself the stringency of not looking at women other than your wife, that’s between you and God. The Torah does not give you permission to be strict with yourself at the expense of others.It’s disrespectful to expect women to accommodate a personal stringency by relegating them to sitting behind men.To women, start noticing when you are being treated inequitably. Why do you allow yourself and other women to be treated this way? Raise your voice when you’re sent to the back of the room or off to the side. Let men know that it’s not okay for them to claim the good seats.When we plan private or communal events, let’s not assume separate seating is required. When we attend separate seating events, we should challenge the organizers to explain why separate seating is necessary. Working together, we can forestall the encroachment of separate seating as a norm in our community. In so doing, we can speak up and say, “Whatever this is, it is not the Torah way.”  The writer made aliya in 2010 from Baltimore to Ma’aleh Adumim and works as a freelance journalist and adult Jewish educator.