The world is now collectively writing a new novel. 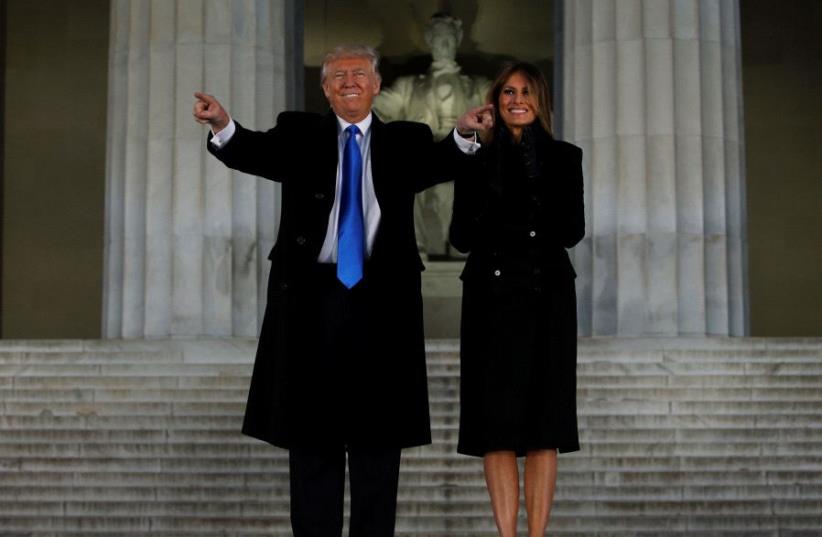 Donald and Melania Trump
(photo credit: REUTERS)
Advertisement
NEW YORK – On the day of Donald Trump’s inauguration, I met Philip Roth.This was a surreal experience, given that, in his 2004 novel, The Plot Against America, Roth precisely described the sinister and chilling nightmare in which the United States now finds itself.We met, along with our mutual friend Adam Gopnik, in Roth’s book-lined Manhattan apartment, where he has moved after announcing his retirement from writing.Roth had spent the morning watching television, and, like many Americans, he had seen the stupefying images of the fussing, overgrown baby who, with diminutive fists raised, insulted the US establishment, the American people, and the world.As his readers know, the author of The Plot Against America has a special fondness for literary heroines. So we dwelled on the case of Melania Trump, the new first lady, who maintained a strangely absent air throughout the ceremony. Was she projecting lucidity? Were we observing the look of someone who has intimate knowledge of the catastrophes that are yet to come? Or was she just the most beautiful girl at the party – the one an avid adolescent had asked to dance, and then held on tightly?The world is now collectively writing a new novel. Roth skillfully distilled the tragic and the comic elements of this process, and we spoke of the forces that might be able to stand up to the dark tide of vulgarity and violence under Trump.The first is the sovereign people, who poured into the streets of every large city in the US with the knowledge that, in terms of total votes, it is they, not Trump, who won the election.Second, there are some Republicans who understand that Trump, the former Democrat-turned-populist, and the Grand Old Party that he used as a stepping-stone to power are in a fight to the death.A third force is the CIA, whose headquarters Trump visited the day after his inauguration. He positioned himself in front of the Memorial Wall – on which are carved 117 stars, representing 117 agents who have been killed in the line of duty – and issued a grotesque and puerile self-congratulation for the number of supporters who had come to Washington to celebrate his ascension.Meanwhile, the American intelligence community will not soon forget that Trump doubted their probity in the matter of Russian hacking to influence the election in his favor.I asked Roth if he thought that it was strange that the greatest democracy in the world must fall back on such an unlikely set of checks and balances. What is strange, he answered, with a burst of laughter and his head thrown back, is this new state of suspended insurrection, for which the improbably elected president bears responsibility. One might think that, owing to this insurgency from within, Trump could serve an even shorter term than that of the protagonist in The Plot Against America.Of course, Roth’s novel and today’s situation are not precisely comparable.Roth’s story unfolds in 1940, and depicts the heroic aviator and Nazi sympathizer Charles Lindbergh triumphed over incumbent president Franklin Delano Roosevelt. And Lindbergh was a virulent antisemite.Trump, nevertheless, employs rhetoric that is reminiscent of Mussolini. And he has professed his solidarity with the worst populists and outright fascist leaders on the other side of the Atlantic, from Nigel Farage and Viktor Orbán, to Marine Le Pen and Vladimir Putin.Then there is that slogan, “America First.” It is astounding that those words have not turned stomachs across the American political spectrum.After all, as anyone with a modicum of historical and political awareness should know, “America First” was American Nazi sympathizers’ slogan in 1940, during Lindbergh’s time.It was the response thrown back at those who wanted the US to resist Hitler’s Germany.It was used to denounce the Jewish “warmongers” who were accused of placing their interests over the national interest.And it is this slogan, which Trump repeated on the Capitol steps, that leads the likes of former Ku Klux Klan leader David Duke to unmask himself and crow, “We did it!”Trump knows all of this, and when it is pointed out to him, he replies that he is looking toward the future, not back at the past.But there are only two teams in this game: nihilists with no memory, and those who know that languages have a history and, therefore, an id. The first team thinks that a speaker can invoke a white-supremacist slogan repeatedly in a single speech without having malign intentions; the second team knows that the genealogy of words cannot be denied without the past taking its revenge.Trump, a would-be ally to the most unsavory and hated demagogues of our time, is being rejected worldwide. But consider this particularly odd and sinister twist: America’s most unpopular president recently developed an affinity for the very same people that his fictional predecessor considered to be subhuman.May the recipients of Trump’s sudden solicitude be as wary of this new friend as they are of their enemies.May they never forget that Israel’s fate is too serious of a matter to be used as a pretext for an impulsive, uncultured adventurer to demonstrate his authority or supposed deal-making talents.And may they be spared the dilemma, depicted in Roth’s novel, of having to choose between two equally dreadful fates: that of the victim, Walter Winchell, or the willing hostage, Lionel Bengelsdorf.America has not read enough of Philip Roth.His world or Trump’s: that is the question.