A deadline looms, residents of the neighborhood, along with the community of Elazar as a whole, have been holding a series of demonstrations calling on the state to intervene and somehow influence. 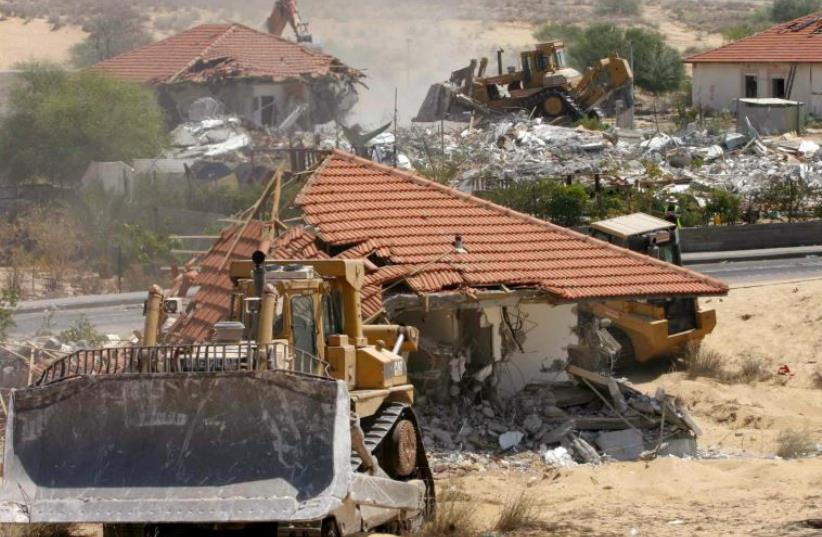 Bulldozers and earthmoving equipment demolish homes in the former Jewish settlement of Neve Dekalim, in the Gaza Strip August 31, 2005.
(photo credit: REUTERS)
Advertisement
It could be argued that the clear summer sunsets throughout the Land of Israel are the most breathtaking in the world. Whether it’s watching the day ebb from the Mediterranean coastline, the mountaintops of the Golan overlooking the Sea of Galilee, or even seeing the sun go down over the ancient Jerusalem stones, there is nothing quite like it.But I think I have found the most beautiful sunset vantage point of them all – the top of Elazar’s Netiv Avot neighborhood. Gazing to the west, the giant ball of fire disappears out of sight and under a horizon with hues of yellow and orange, followed by red and purple. All the while, with the naked eye, you can see the tall buildings of the Ashdod coast down below, and the sea itself, as well as boats.But that sunset, and overall bliss for the residents of Netiv Avot, is about to be turned on its head. A 2016 High Court ruling has declared 15 out of the community’s 42 homes illegally built on “private Palestinian land,” and a March 2018 date has been set for their demolition by the state.Now what’s uniquely absurd about this ruling is that a Civil Administration land survey didn’t indicate that all of the structures in question were “illegal,” but only parts of each home. For example five meters in one house are in question, three meters in another, all the way down the line.In other words, you have beautiful homes where a kitchen might be deemed “legal” while a section of a child’s bedroom is “illegal.” But instead of finding practical solutions, the court ruled that each and every home (along with two other structures in the neighborhood) must be demolished in their entirety.It’s important to learn about the neighborhood’s history in order to understand how we are in a situation today in which Jewish families are once again going to be left homeless.In 2001, a small group of Israelis with a pioneer spirit decided to establish a new Elazar neighborhood on what they were told was state land. As was similar practice in the founding of many kibbutzim and moshavim in pre- 1967 Israel, the residents settled the land, which they knew was classified as state land, and decided to deal with the paperwork, permits and all other technicalities afterwards.The government of Israel at the time supported this new venture, to the tune of hundreds of thousands of shekels, providing the new neighborhood with infrastructure by paving roads, hooking up electricity, water, sewage – the works.It was smooth sailing until the radical NGO Yesh Din filed a petition against the residents of Netiv Avot in 2014, telling the High Court they represented a local Palestinian who had claims to certain areas of the neighborhood. The court asked the state to investigate the matter via the Civil Administration.The Civil Administration researched the issue and determined that two strips of land, weaving in and out of where the houses in question stand, might have in fact been land worked by Palestinian farmers. As a result, the state went back to the court and labeled those two strips as “private Palestinian land.”This despite the fact that to this day no private ownership of that land, or registration of ownership has ever been proven, nor were any ties of the Arab petitioner to the land proven.However, the state report did include an addendum proposing that a rational solution should be implemented, which would prevent the destruction of the homes – namely to offer the Arab claimant, subject to proof of ownership, a land swap and generous financial compensation.Nevertheless, the High Court in its ruling on the most recent petition on the matter (levied by Peace Now in 2016) put its foot down, rejecting the state’s suggestion, and decided that all 15 homes must be leveled.While every case is unique, we’ve seen some of these types of ludicrous rulings before. Whether it was the 2012 evacuation of 50 families from Migron, who were relocated to a trailer park just two kilometers away, or the destruction of five buildings in Beit-El’s Ulpana apartment complex that same year, no Arabs are currently present utilizing the lands, which were once thriving Jewish areas, in any way, shape or form.I would bet that the same will hold true in the area where the recently demolished Amona stood, along with the land where nine Ofra homes once sat. In other words, Jewish homes are being torn down without rhyme or reason.But the Netiv Avot case, with the two questionable weaving and winding “private” paths, might take the cake in turns of Chelm-like decisions by the court.One of the two non-inhabited structures on the chopping block included a pergola in the neighborhood dedicated to two fallen IDF soldiers, Lt.-Col. Emmanuel Moreno and Lt. Ezra Asher.This sacred site was already demolished and a replacement built just 22 meters from its original location because of the questionable status of where it stood.The new structure is also in memory of Maj. Yochai Kalagnel, an IDF soldier killed by Hezbollah in a 2015 cross-border attack from Lebanon. The Kalagnel family are in fact community leaders in Netiv Avot, and have been residing there for all these years.As the March 2018 court deadline looms, residents of the neighborhood, along with the community of Elazar as a whole, have been holding a series of demonstrations calling on the state to intervene and somehow influence the court to reevaluate its decision.While one coalition minister recently said that saving the Netiv Avot homes would be a very “difficult” task, perhaps it’s not too late for the court to come to its senses and salvage the homes, and the sunsets for these families, for many years to come.

The author is a talk-show host on thelandofisrael.com radio network and a resident of Elazar.