Will the coalition clashes over the hotly-debated legislation regarding the Israel Broadcasting Corporation drag Israel into another, unexpected round of elections? 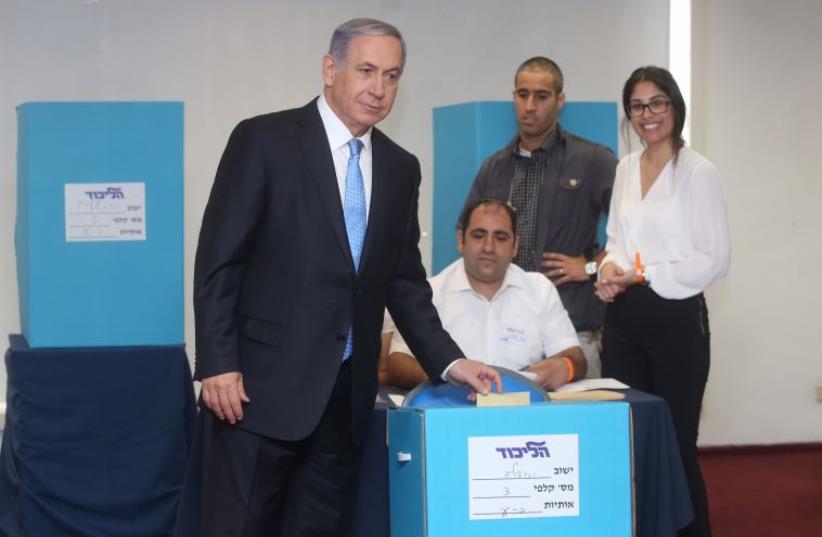 Prime Minister Benjamin Netanyahu votes in Likud central committee elections
(photo credit: MARC ISRAEL SELLEM/THE JERUSALEM POST)
Advertisement
Is the nation headed for an election? With dizzying speed, the seemingly stable, ideologically homogeneous government coalition has been thrown into election mode.As late as Friday, it seemed that the coalition crisis over the creation of a replacement public broadcaster had been averted.Prime Minister Benjamin Netanyahu agreed to move ahead with the launch of the Israel Broadcasting Corporation, aka Kan, on April 30, as stipulated by a law passed by the previous Likud-led government. And Finance Minister Moshe Kahlon agreed to allow for more government oversight of Kan’s editorial policy, as requested by Netanyahu.(We opposed this concession of Kahlon’s as a dangerous move that would eviscerate Kan’s journalistic autonomy.) But sometime on Saturday, Netanyahu had a change of heart and demanded that Kan be scrapped and that the old, dysfunctional Israel Broadcasting Authority, which resisted reforms for over a decade and was on the verge of being closed, be resuscitated.Kahlon has so far remained quiet, though he has in the past reportedly vowed to go to elections rather than to give in to the prime minister on this matter.It is not at all clear what is driving Netanyahu to generate a coalition crisis over Kan. Ostensibly, his change of mind came in the wake of a meeting with the employees of the IBA, who shared with the prime minister their fears over being fired. This is not convincing, however, since this is the same Netanyahu who ran in the previous election with a campaign that likened public sector workers – including employees of the IBA – to Hamas terrorists. Nor has the neoliberal Netanyahu been moved in the past by workers’ emotional pleas to call off economic reforms when he can save taxpayers’ money.Sources close to Netanyahu say that resuscitating the IBA would actually save around NIS 100 million annually. But this is challenged by Finance Ministry officials. And even if this were true, saving NIS 100m. hardly justifies jeopardizing coalition stability and risking an early election.Nor does the claim that Kan is controlled by the left-wing media elite hold water. A number of prominent right-wing journalists such as Roi Sharon, Kalman Lipskind, Ya’akov Ahimeir and Avishai Ivri are slated to work at Kan.And even if you accept the prime minister’s claim that he receives negative press from the media outlets and that Kan will be yet another contributor, he nevertheless has managed to stay in power since 2009. The so-called danger of a hostile news media seems, therefore, to be exaggerated.There are those who postulate that Netanyahu’s readiness to go to the ballot box over a non-issue is motivated by a desire to influence the criminal investigations against him. There is some logic to this claim. Initiating an election season might not slow the progress of police investigations.An election victory at a time when the public knows that he is suspected of criminal activity would, however, neutralize the negative political effect of investigations.But this is no reason to throw the nation into an election.Under Netanyahu’s leadership Israel has successfully navigated a turbulent Middle East. But we face many new challenges.A new order in a weakened Syria must be prevented from becoming a base for Iranian influence on our border.The Trump White House is formulating its Middle East policy. This is no time for the political leadership to divert its limited resources and energies to reelection.Kahlon’s stint as finance minister has been successful.But it is a work in progress with the job of lowering housing prices still under way. Similarly, implementation of policies in the fields of transportation, education and health among others must not be suspended by an early election.Besides the blow to governance resulting from a premature national election, the direct costs are staggering. The slow-down in economic productivity, the cost of funding campaigns and election-day expenses add up to close to NIS 2 billion. This would be a large chunk of the gain to the state coffers from the Mobileye sale.And there is the psychological effect of a culture of shortlived governments. Politicians who know they have only a short time before having to campaign again will be averse to money-saving but unpopular reforms.The present government was elected in a fair, democratic process. It is a remarkably stable, ideologically homogeneous coalition that could very well finish out its mandate through November 2019. There is no justification for a costly election now.