For a stronger Year Two

By Editorial
JANUARY 19, 2010 23:58
Advertisement
A year ago today, Israelis watched US President Barack Obama deliver his inaugural address on the West Front of the US Capitol Building in Washington, DC., as Operation Cast Lead in the Gaza Strip was - not coincidentally -  concluding.Regardless of their political views, they looked to the new leader of the free world with a healthy mix of dread and hope, knowing that some of what he would say and do could have as much impact on Israel and other Middle Eastern nations as on America.Obama did not mention Israel in his address, but he did devote a good portion of the speech to matters that concern us. Notably, he offered an outstretched hand to the Muslim world, accompanied by a warning.The stick was delivered eloquently: "For those who seek to advance their aims by inducing terror and slaughtering innocents, we say to you now that, 'Our spirit is stronger and cannot be broken. You cannot outlast us, and we will defeat you.'"He promised that "With old friends and former foes, we'll work tirelessly to lessen the nuclear threat."For the carrot, he said: "To the Muslim world, we seek a new way forward, based on mutual interest and mutual respect."And he summarized his doctrine of engagement by saying: "To all other peoples and governments
who are watching today, from the grandest capitals to the small village where my father was born: know that America is a friend of each nation and every man, woman and child who seeks a future of peace and dignity, and we are ready to lead once more."ONE YEAR later, the great expectations that Obama set for himself in this sphere, and that others placed in him, lie largely unfulfilled.America has not defeated terror in Iraq, Afghanistan, or even in its own airspace. While the Christmas Day bomber aboard a flight to Detroit was unsuccessful, the ease with which the attacker evaded security precautions certainly weakened America's spirit, and the consequences for national morale had he succeeded do not bear imagining. The US would have been pitched back into the dark days following September 11, 2001, when the terrorist murders of thousands of innocents served as a wake-up call the last time America had a new president.Obama's diplomatic approach to preventing Iran's nuclearization has borne no fruit; his delays in applying sufficiently biting sanctions risk giving the Iranian leadership the impression that it won't be held accountable. Meanwhile, the Iranian people, who may have been inspired by Obama's election, were denied his robust support when they risked their lives - and in some cases lost their lives - to protest the theft of a free election of their own.Obama admirably sought a new way forward in his relations with the Muslim world, which he elucidated in his June 4 speech in Cairo. The response to date has been a cold shoulder, including the rejection of the positive gestures he sought from Arab leaders to give Israelis hope of reciprocity in the peace process.Notwithstanding his outreach, an International Peace Institute poll of Palestinians in the West 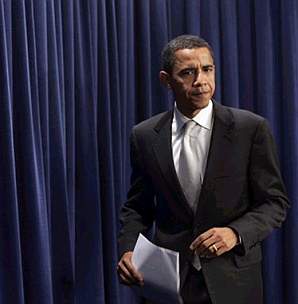 Bank and Gaza taken after the Cairo speech found that only 27 percent viewed Obama positively; just 16% had a favorable view of the US.Meanwhile, Obama's call for a halt to all Israeli building beyond the 1967 lines - a demand no Israeli prime minister could meet in full - needlessly radicalized the Palestinian leadership, for how could Mahmoud Abbas consent to resumed talks with Israel when Prime Minister Binyamin Netanyahu was not even doing what his American allies required him to do? That pressure to halt building even in east Jerusalem and the major settlement blocs also reduced the president's credibility among Israelis.UNDER THE headline "Time to get tough," The Economist's current cover portrays Obama sitting at his desk with the Nobel Peace Prize on the wall as boxing gloves are handed to him through the window. The magazine expresses hope that, after his goodwill tour of the world produced nothing but "a series of slaps in the face," the president would now be able to apply the stick to Iran, rather than persist with the carrot.This is our hope as well: A strong Israel requires a strong America that is respected by the world.That was prominent among the expectations Americans and Israelis harbored on that wintry day in Washington a year ago. And that is what they need still more urgently in President Obama's second year.
Advertisement
Subscribe for our daily newsletter