Egypt accuses US of being the mastermind of Paris attacks

"I have a rational fear that the continuous depiction of America as sponsor of terrorism will give extremists a free hand in targeting Americans." 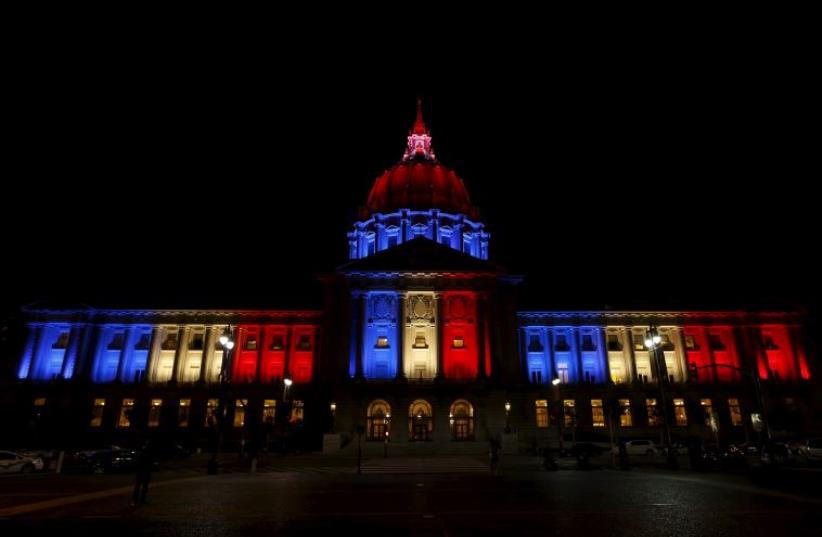 San Francisco City Hall is lit up with blue, white and red, the colors of the French flag, following the Paris terror attacks, in San Francisco, California November 13, 2015.
(photo credit: REUTERS)
Advertisement
Two days ago, the most widely circulated Egyptian daily, Al-Ahram, which is understood to be loyal to the state, continued its demonization of America by running a cartoon depicting Islamic State as a man, marked “Made in USA,” eating another alive, while a person-world is pointing two fingers at the victim, saying “Muslim, terrorist.”I work in the area of cognitive sciences.I study how individuals think and how language and images work.The most fundamental understanding is that most thought – about 98% – is unconscious. My job here is to spare no effort to make the unconscious conscious.Here goes: One of the basic findings of cognitive science is that we think in terms of frames and metaphors. The frames exist in the synapses of our brains, physically present in the form of neural circuitry.When the facts don’t fit the frames, the frames are kept and the facts ignored, even ridiculed.The frames the Al-Ahram cartoon activates are: A villain (the US, the creator of Islamic State or IS), a victim (the Muslim community), and an unfair judge (the international community). We have neurons that are connected to emotions.So, for example, when you hear the word “villain,” you feel angry. Similarly, when you hear the word “unfair,” you feel bitter. In this scenario, these emotions are channeled: the villain, for instance, must be fought and excluded.In fact, in a speech last month at the annual gathering of the Valdai Club, a group of Russian and international analysts and politicians, Russian president Vladimir Putin, who is understood to be Egypt’s new ally, also accused Washington of backing terrorism.He said: “It’s always hard to play a double game – to declare a fight against terrorists but at the same time try to use some of them to move the pieces on the Middle Eastern chessboard in your own favor.”Putin used the game of chess as the source frame for a metaphorical conceptualization of states and changes; the game of chess itself is a metaphor of battle and war. In a chess game – as Dr.Ning Yu, professor of applied linguistics at Penn State College of Liberal Arts, says in his 1998 book The Contemporary Theory of Metaphor – “every move of a piece is a change made out of an old state and into a new state.” It is a change emanating from the change of location of a particular piece. The metaphor highlights that the US acts in its own self-interest and is a sponsor of terrorism.I have a rational fear that the continuous depiction of America as sponsor of terrorism will give extremists a free hand in targeting Americans. Furthermore, when terrorist threats (allegedly) come from states rather than groups of individuals, the central problems in today’s world can only be solved by state-level approaches, such as waging a war against the American people. This has so far been unsayable in the international media. But it must be said, lest it happen in truth.What is needed is a new kind of moral foreign policy. Russia must become a moral nation centered on fundamental human values. Clearly, it must stop supporting Abdel Fattah Sisi of Egypt and Assad of Syria, knowing that these two dictators have killed and detained tens of thousands of people in attempts to stabilize the inherently unstable. Furthermore, if the United States is acting in self-interest, what about Russia? Finally, it is understood that Al-Ahram uses the conspiracy theory (which is deeply rooted in the Egyptian mind in particular and the Arab mind in general) to justify the economic collapse in Egypt and to portray coup leader Sisi as a national hero, who, from Al-Ahram’s perspective, would challenge America, as did Gamal Abdel Nasser, the late Egyptian president, after the revolution of 1952.In fact, Al-Ahram does not only demonize the United States, but also the West as a whole. Just the other day this state newspaper, for example, ran a cartoon depicting the Arab world as a sad man with many facial injuries, and a fist, marked “EU,” addressing him, saying, “Where can I punch you – there is no well area in your face?” The cartoon suppresses the fact that the EU does not target the Arab world, but rather IS. In this regard, it is not only the EU that must deter terrorists and fight them, but also the Arab world.After all, it would be legitimate for Al-Ahram to support the coup; but it’s not legitimate to stigmatize America as the mastermind of Paris attacks.The writer is a PhD candidate in cognitive science at the University of Lodz, Poland. He has been published in international journals, such as Metaphor and the Social World and Sciences de la Societe.