Elections in the Netherlands: A blow to the surge of right-wing populism?

The most serious challenge to the late surge of Right-populist movements could be the availability of anti-establishment parties and candidates in the center and on the left. 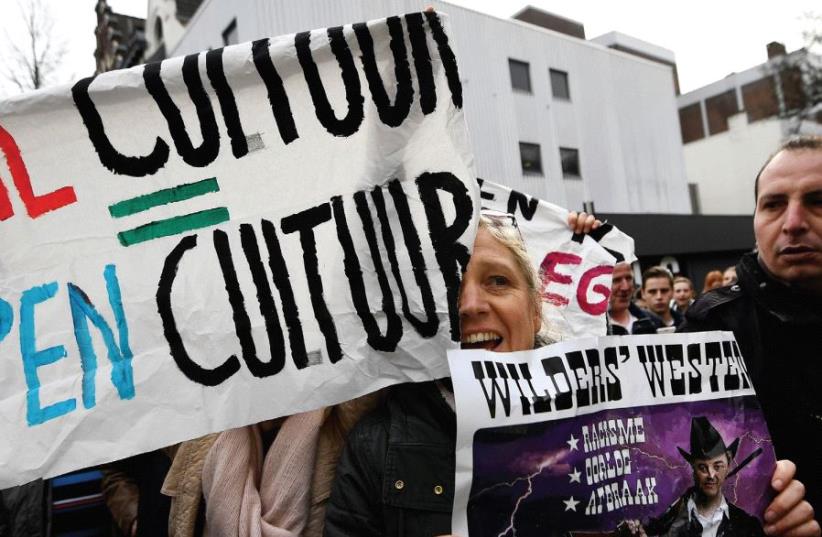 PRO-IMMIGRATION ACTIVISTS shout as they are stopped by police during a visit by Dutch far-right politician Geert Wilders of the PVV party in Heerlan, Netherlands in March 2017.
(photo credit: REUTERS)
Advertisement
Dutch voters punished the established parties, yet that did not lead to the feared victory of right-wing populist Geert Wilders. The distribution of the protest vote among a number of alternative political forces may be instructive of future developments in other countries.As exit polls of Wednesday’s national election in the Netherlands indicate a victory for Dutch Prime Minister Mark Rutte’s Right-liberal People’s Party for Freedom and Democracy (VVD), commentators in the European media expressed relief and celebrated a blow to right-wing populism.In the polls leading up to election day, Wilders’s Right-populist Freedom Party (PVV), promoting a nationalistic, anti-immigration and anti-European platform and vowing to prohibit the Koran in the Netherlands, was seen as competing headto- head with the VVD for the position of the strongest faction in parliament. With Donald Trump in the White House, French Right-populist Marine Le Pen leading polls for the upcoming national election in her country, and the British having voted to leave the EU, many were anxious that the election in the Netherlands might continue a global trend of growing support for Right-populist movements and leaders.Yet celebrating the reversal of this trend could be premature. Even though the PVV did not become the strongest party, as many had feared, it gained three percentage points over the previous election, while the ruling VVD lost five. Hence, the PVV consolidated itself as the second-strongest party, weighing heavily on a significantly weakened VVD.Left with only 30 of 150 seats in the Dutch parliament, Rutte could need three more parties to form a coalition. His former coalition partner, the Labor Party, suffered a landslide defeat, losing 29 of the 38 seats it has in the outgoing parliament. Even though Rutte and all Dutch parties ruled out a coalition with Wilders, the latter’s increased political support will likely have a significant impact on the country’s political agenda, as was observed already during the election campaign.It is commonly assumed that Rutte’s recent decision to bar representatives from Turkey from campaigning among Turkish expats for the reform of Ankara’s constitution – a move considered by many a significant step toward the consolidation of an autocratic Turkish regime – was an attempt to secure support of potential Wilders voters.While other European governments harshly criticized Turkey for sending representatives to campaign in their countries, many European diplomats thought a ban would only strengthen the Turkish government, which is trying to win support for the reform by representing itself as a victim that needs to be strengthened in the face of exterior threats. Now there are voices suggesting that Rutte’s decision worked, helping him portray himself as the savior of the Dutch nation and western values.Yet the election outcome represents a defeat for the established parties. The real winners are smaller parties that provide anti-establishment voters an alternative to the Right-populists.Similarly, in France, it is the independent Emanuel Macron who, unlike the candidates of the established parties, appears to have the best chances of beating Marine Le Pen in the upcoming race for the French presidency. In Germany, the Social Democrats are gaining ground in the polls after they nominated Martin Schulz, former president of the European parliament and a critic of the centrist economic and social policies of former Social Democratic administrations, as their candidate for the chancellorship.The most serious challenge to the late surge of Right-populist movements, then, could be the availability of anti-establishment parties and candidates in the center and on the left. In other words, it might primarily have been the availability of small parties that defeated Wilders and his PVV rather than Rutte and his VVD in an election that saw a remarkably high voter turnout of 82% percent.The absence of additional anti-establishment candidates that characterized the last elections in the United States, hence, may have contributed significantly to the victory of Trump.The writer, a German-Israeli social scientist and journalist, holds an MA in sociology and is a PhD candidate at the Hebrew University of Jerusalem.