Ellison was defeated by own actions, not by smear

We won the fight against Ellison, though it was close. We must continue to win if the Democratic Party is to remain competitive. 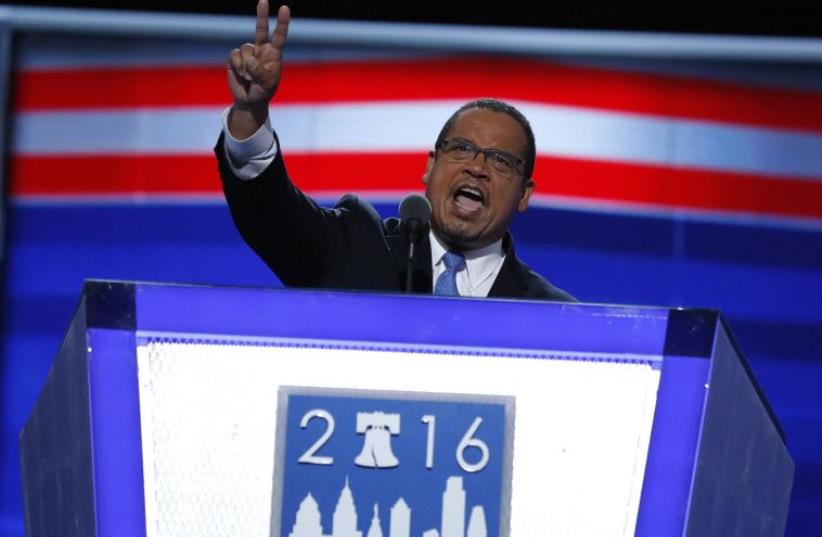 US Rep. Keith Ellison
(photo credit: REUTERS)
Advertisement
The close vote by the Democratic National Committee to reject Keith Ellison as its chairperson was a victory for basic decency and a defeat for the kind of bigotry represented by Ellison’s past associations with Louis Farrakhan and his current voting record against Israel’s Iron Dome. Ellison’s loss is not attributable to any “smear campaign,” as some of his supporters have falsely alleged, but rather to his own actions, both past and present.Would anyone call it a smear if a candidate’s history of sexism, racism or homophobia had been exposed? Why then it is a smear to have raised questions based on Ellison’s past associations with antisemitism and his current voting anti-Israel voting record? Nor was it a smear to question Ellison’s credibility when he said that he was not aware that Farrakhan was an antisemite, when Farrakhan himself was publicly boasting about his Jew hatred.The smear charge itself reflects the kind of double standard within elements of the Democratic Party that worry centrist pro-Israel voters. Both Democrats and Republicans alike must have the same zero tolerance for antisemitism as they do for sexism, racism and homophobia.The growing influence of intolerant hardleft extremists endangers both our country and the Democratic Party. Democrats must recognize the reality that the United States is not a hard-left country. Unlike some European countries, we have never had significant communist or socialist parties.Nor are we a hard-right country, with a history of fascist parties. We govern from the center, alternating centrist liberals, such as Obama and Clinton, with centrist conservatives like the Bushes and Reagan.When the Democrats tried to move leftward, even with such moderate leftists as McGovern, Mondale and Dukakis, they have been overwhelmingly defeated.The combined electoral votes of these three leftish candidates would not have been enough to win a single election. The Republicans experienced similar rejection when they went to the far Right of their party and nominated Barry Goldwater.Had Senator Bernie Sanders won the Democratic nomination, he would have won no more than a handful of states. It is far easier for the hard-left fringe of the Democrats to win primaries and conduct loud demonstrations than to win national or state-wide elections. If the Democratic Party fails to understand this reality they will emulate the British Labour Party, which rejected the kind of moderate liberal leadership represented by Tony Blair in favor of the extreme leftist Jeremy Corbyn.The Corbyn-led Labour Party is popular among left-wing extremists, but today it could not be competitive in a national election. Nor would the Democrats be competitive if they allow themselves to be taken over by the Sanders fringe.Great Britain has a far greater proportion of hard-left voters than the United States. Yet even there, the radical Corbyn Left cannot attract enough voters to be competitive – even in the post-Brexit environment.It would be worse – much worse – for the Democrats if they become the party of the extreme Left.Those who believe that Democrats can win by attracting the kind of hard-left radicals who voted for Green Party candidates such as Jill Stein or Ralph Nader are deluded. The Democrats could never nominate a winning candidate far Left enough for those hard-left ideologues to abandon their extremist candidates. Extremists like Susan Sarandon seem to believe that a vote for Trump will hasten the revolution. This is how she put it: “Some people feel that Donald Trump will bring the revolution immediately if he gets in, things will really explode.”Nor can the Democrats win by emulating the tactics of the Republican Party. The Tea Party did move the Republicans to the Right by their uncompromising and obstructionist approach. But the US has more tolerance – unfortunately in my view – for rightward movement (as long as it’s not too extreme) than the Democrats gave for leftward movement.The current leadership of the Democratic Party is reacting short term to a long-term problem. They are responding to the loudest, shrillest and most demanding voices – voices that are hardly representative of the tens of millions of voters they will need to remain competitive in upcoming races.The Democrats can win only by regaining their traditional base among working class rust-belt voters they lost to Trump. These voters will never support the kind of radical left-wing candidates promoted by the Keith Ellison wing of the party.Ellison’s appointment as the deputy to Tom Perez, the man who defeated him, elevated unity over principle. His past history and current voting record should have disqualified him for any office within the Democratic Party. But despite that unfortunate appointment, I will remain in the Democratic Party and work from within to move it back to its vibrant liberal center and away from its radical fringe. I will also work to maintain bipartisan support for Israel and against efforts by the hard Left to abandon the only democracy in the Middle East.It will be a daunting task but it is worth the effort. We won the fight against Ellison, though it was close. We must continue to win if the Democratic Party is to remain competitive.