Disgracefully, none of the 160 countries that currently have diplomatic relations with Israel have placed an embassy in Jerusalem. 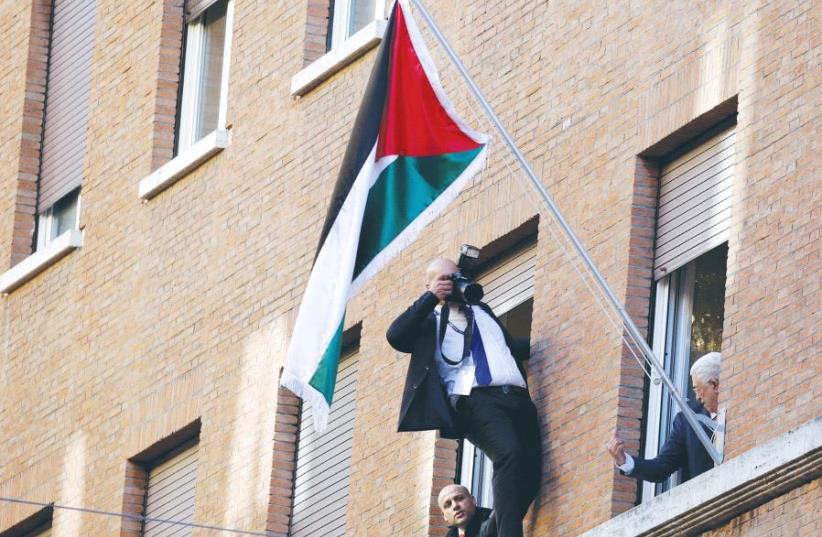 PALESTINIAN AUTHORITY PRESIDENT Mahmoud Abbas looks out a window during the inauguration ceremony of the Palestinian Embassy to the Holy See at the Vatican two weeks ago
(photo credit: REUTERS)
Advertisement
The essence of international diplomacy often is obscured by pervasive murkiness, and nowhere is this more evident than in the complexities of Israeli- Palestinian relations and peacemaking.Here, blatant favoritism toward one party tends to undermine the entire process.This conundrum was on full display in the heart of Rome in mid-January. As a follow-up to the pope’s declaration in May 2015 recognizing the “State of Palestine,” Mahmoud Abbas, president of the Palestinian Authority, visited the Vatican with little fanfare, met once again with Pope Francis, and then opened the Palestinian embassy opposite one of the gates to Vatican City.“This embassy is a place of pride for us and we hope all countries of the world will recognize the state of Palestine, because this recognition will bring us closer to the peace process,” Abbas declared.While patently absurd, establishing diplomatic ties with a non-existent country is widely accepted as normal – at least when it comes to Palestine. The Vatican is just the latest of the 136 countries that Palestinian leaders claim have recognized the “State of Palestine.” Among them, 75 host Palestinian embassies in their respective capitals and another 20 have lower-level Palestinian diplomatic representatives. Conversely, Ramallah has representatives from 39 countries, and another 13 maintain consulates in Bethlehem and east Jerusalem.The Palestinians got a global diplomatic boost in 2012 when the UN General Assembly, by a vote of 138 to nine, with 41 abstaining, upgraded the Palestinian delegation to the UN to nonmember observer-state status, effectively recognizing a Palestinian state even though it does not yet have a vote at the world body. France, Spain, Italy and Switzerland all voted yes, while Britain and Germany abstained. Canada was the only major country that joined the US and Israel in voting no.Though some governments seem to have concluded that joining the groundswell of support for recognition of Palestine would somehow advance the cause of peace and realization of a two-state solution, such errant diplomacy has instead emboldened Abbas and the Palestinian leadership to defiantly resist direct, bilateral talks between the PA and Israel, undermining the only assured path to achieving a comprehensive, sustainable Israeli-Palestinian peace deal.When he celebrated on-site the opening of his Vatican embassy, Abbas publicly warned the US about moving its embassy in Israel – indeed, even contemplating and discussing openly that possibility – from Tel Aviv to Jerusalem. The implied threat of violence directed at the US provides a stunning contrast with the muted global reception to the opening of Palestinian diplomatic missions.Whatever President Trump ultimately decides to do about the American embassy, the fact remains that Jerusalem is the capital of Israel. Surely, the US embassy, as well as those of other foreign legations, should be located there, just as they are appropriately situated in capitals of other countries.Disgracefully, none of the 160 countries that currently have diplomatic relations with Israel have placed an embassy in Jerusalem.Abbas is determined to keep it that way as part of the Palestinian strategy to deny any Israeli, or Jewish, connection to that holy city. UNESCO and the UN Security Council have let themselves be used for that purpose as well.This unquestioning, groupthink acquiescence to the Palestinian approach is dangerous.The many governments that have taken the extraordinary action of recognizing Palestine and establishing diplomatic relations with it need to hold the Palestinian leadership responsible too, and rigorously press Abbas to refocus his diplomacy on returning without delay to the negotiating table with Israel.Otherwise, Palestinian leaders will continue on their illusory path, believing that the international community supports their view that a Palestinian state will be created with or without Israel’s agreement – a fantasy that is as incendiary as it is preposterous.The writer is the American Jewish Committee’s director of media relations.