No peace process nor peace agreement will be imposed on either the Israelis or the Palestinians. 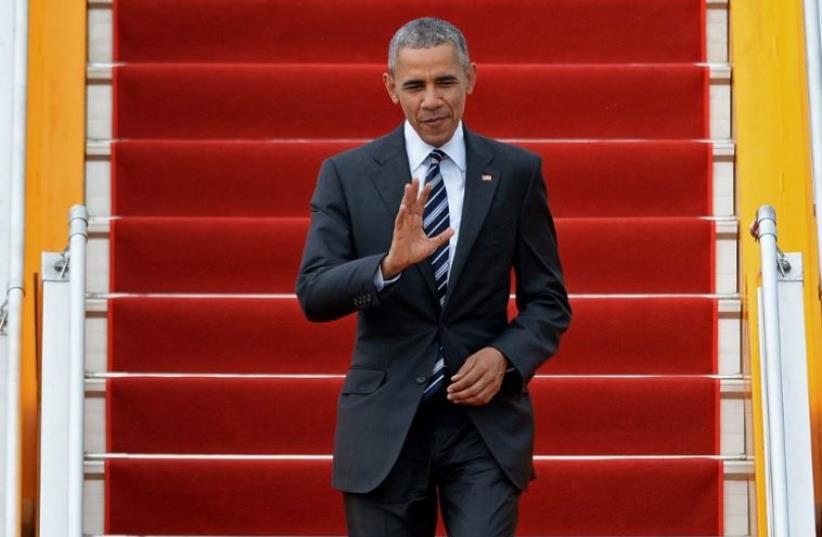 US President Barack Obama waves as he arrives at the Tan Son Nhat airport in Ho Chi Minh City
(photo credit: AFP PHOTO)
Advertisement
Will President Barack Obama leave a legacy platform on Israeli-Palestinian peace? And if so, what should it be? This is a question being debated in policy forums in Washington and in the Middle East. In Israel it is a lively debate taking place within what remains of the peace camp. Likewise on the Palestinian and Arab side, there is a lot of discussion and hope that before leaving the White House on January 20, 2017, President Obama will leave an indelible mark setting the parameters of peace that the next president will not be able to ignore.Let it be noted that I also hope that President Obama will do this. I share the belief that a new UN Security Council Resolution, with clear parameters for the two-state solution and aimed at replacing the antiquated Resolution 242 is important and perhaps even necessary to save the two-state solution. The likelihood of this occurring, however, is close to zero. Some are suggesting as an alternative that Obama would refrain from vetoing a Security Council resolution that condemns Israeli settlement building as illegal and against international law. So what? Would that be the impetus to prevent future Israeli building in Gilo or Ramot or even in Gush Etzion? In the absence of a Security Council Resolution some are suggesting a presidential speech with clear peace parameters. Is that what we are missing? Is that why there is no peace process and no peace? What possible value would another presidential speech have for the incoming president or for that matter for Israeli and Palestinian leaders? And why should anyone believe the new president will pick up an Obama speech and start remaking an Israeli-Palestinian peace process during the first half of their new administration? No, if there is any lesson to be learned from Obama about the Israeli-Palestinian peace process, it is to stay far away from it.No peace process nor peace agreement will be imposed on either the Israelis or the Palestinians.No US president will try to impose an agreement and neither the Israelis nor the Palestinians will ever accept an agreement that does not meet their minimal demands. No new American president, be it Hillary Clinton or (God forbid) Donald Trump, is going to place the Israeli-Palestinian issue on their agenda, at least not during the first half of their first term, and by then they will already be campaigning for their second. The European Union is also not going to come to our rescue, nor will Russia, China or the Arab world.The biggest favor the departing US president can do for us, meaning Israel and the Palestinians, is to be straight and direct: the US is not going to save you. The US will continue to have Israel’s back, it will continue to provide military aid and a lot of money. The US will continue to support the Palestinian Authority, as long as it is not taken over by Hamas (or worse). The US will continue to issue worthless statements against the building of settlements while at the same time strongly opposing boycotts and divestment at home. Perhaps more importantly, the US will continue to provide Israel with a protective political umbrella in the international arena – the UN Human Rights Council, UNESCO, the Hague and more, even if Israel continues to build settlements. Only if Israel actually annexes parts of the West Bank might the US blanket of support be shaken, but even that is questionable.As far as I can see, even if the Boycott, Divestment and Sanctions (BDS) movement is being presented by the Israeli government as an existential threat and serious resources are being dedicated to fighting it, the unprofessional nature of the way that fight is being conducted is indicative of the reality: BDS is much more of a smoke screen than a real threat. While it is true that individual companies working in occupied areas have been targeted and those attacks have succeeded (several companies have relocated from the West Bank to inside of Israel), in the grand scheme Israel is significantly insulated from the effects of boycotts.There is a larger threat of growing delegitimization of Israel’s existence around the world, especially at the level of civil society, but the only real way of derailing that is to end the occupation and Israel’s control over the Palestinian people.It is not about “public diplomacy” (hasbara), it is about reality.The continued belief that someone from the outside, such as the US president, the Quartet, the Saudis or someone else will resolve our conflict has enabled both Israelis and Palestinians and their leaders to escape the responsibility of taking charge, sitting down and figuring out how to do it. There is no avoiding the reality and the urgency of finding solutions, even if implementing the solutions takes years. This conflict has no chance of ending without sitting down together and reaching agreements. No one is going to do it in our place.The author is founder and co-chairman of IPCRI, the Israel Palestine Creative Regional Initiatives.