The murders of Ali Dawabshe and Shira Banki were committed not by crazy people; they were acts inspired by rabbinic authorities and politicians who sanctify land above people. 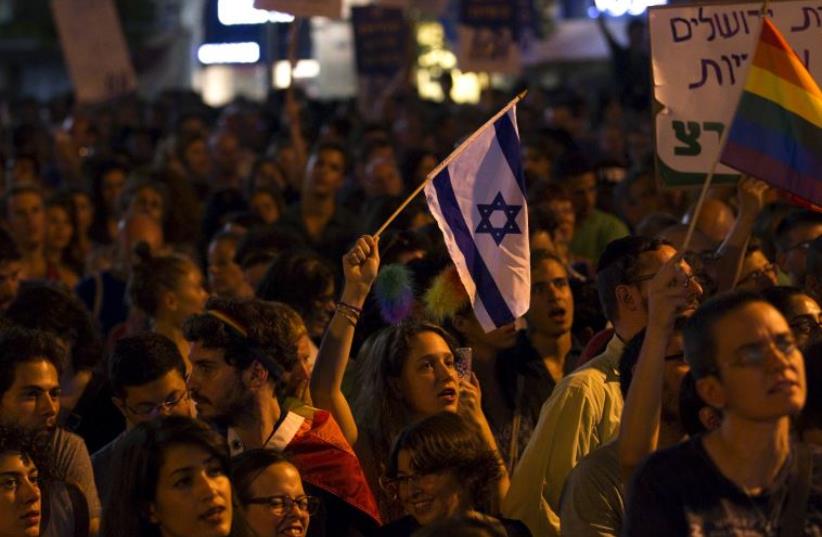 Anti violence rally in Tel Aviv
(photo credit: REUTERS)
Advertisement
My last Saturday night was spent, like so many other Saturday nights over the past 35 years, attending a demonstration in Tel Aviv’s Rabin Square. With one day’s notice thousands of like-minded Israelis gathered together to cry out against the horrors of hatred and violence – the crimes committed by Jews, based on a warped, distorted and dangerous interpretation of Judaism. The murders of Ali Dawabshe and Shira Banki were committed not by crazy people; they were acts inspired by rabbinic authorities and politicians who sanctify land above people. They were committed and supported by those who dehumanize anyone who is not like them.So many times we have seen the writing on the wall – “death to Arabs.” Those who write these slogans on walls and in their hearts call themselves religious Jews. They believe that they are acting on Jewish belief. They believe that their actions will bring the Messiah and lead us all to redemption. “You shall not murder” was in the Torah portion we just read last week. Where is “love thy neighbor as thyself”? The Judaism that tells people to kill and which dehumanizes our neighbors or think it is legitimate to hurt people with other values, including those in the LGBT community – this is not my Judaism, and those who follow that distorted religion are not Jews. But they are not acting in a vacuum. They have developed their religion of hatred in an environment of impunity – never being punished for the crimes they commit. They have settled illegally on other people’s land. They conduct their lives as the lords of the land. They have sponsors and patrons who get elected in local and national elections. They follow rabbis who preach death and hatred which they then practice against their Palestinian neighbors.Like so many of the “talk-backers” to my articles in this newspaper, rather than taking a moment to consider that perhaps the author has some valid points to make, they spew their own words of hatred, and hold in their hearts their own desires to justify violence against our neighbors – and while we’re at it any Jew, like myself, who actually thinks that we should be working for peace with our neighbors instead of killing them or expelling them.The root of all of this evil, the mother of all of these sins is the occupation – the control of another people and the denial of their right to live in freedom. For almost 50 years the occupation has poisoned the soul of Israel and distorted Jewish philosophy and belief to its current unrecognizable form which justifies murder. At the demonstration in Rabin Square, I saw someone wearing a T-shirt that said it all: Yeshayahu Leibowitz was right! I remember listening to this prophet of doom in the late 1980s and early 1990s. No one could deny his genius or his piousness. He was one of the most accomplished scholars in Israel and also a very Orthodox Jew. He was a man of clear thought and sharp words and I will allow his words regarding occupation to conclude this article: Without an agreement imposed from the outside, our situation will deteriorate to that of a second Vietnam, to a war in constant escalation without the prospect of ultimate resolution.“Security” is a reality only where there is true peace between neighbors, as in the case of Holland/Belgium, Sweden/Norway, the United States/Canada. In the absence of peace there is no security, and no geographic-strategic settlement on the land can change this. There is no direct link between security and the territories.Our security has been diminished rather than enhanced as a result of the conquests in this war.Rule over the occupied territories would have social repercussions. After a few years there would be no Jewish workers or Jewish farmers. The Arabs would be the working people and the Jews the administrators, inspectors, officials, and police – mainly secret police. A state ruling a hostile population of 1.5 to 2 million foreigners would necessarily become a secret-police state, with all that this implies for education, free speech, and democratic institutions. The corruption characteristic of every colonial regime would also prevail in the State of Israel. The administration would have to suppress Arab insurgency on the one hand and acquire Arab Quislings on the other. There is also good reason to fear that the Israel Defense Force, which has been until now a people’s army, would, as a result of being transformed into an army of occupation, degenerate, and its commanders, who will have become military governors, resemble their colleagues in other nations.Our real problem is not the territory but rather the population of about a million and a half Arabs who live in it and over whom we must rule. Inclusion of these Arabs (in addition to the half a million who are citizens of the state) in the area under our rule will effect the liquidation of the State of Israel as the state of the Jewish people and bring about catastrophe for the Jewish people as a whole; it will undermine the social structure that we have created in the state and cause the corruption of individuals, both Jew and Arab.The author is the co-chairman of IPCRI, the Israel Palestine Creative Regional Initiatives, a columnist for The Jerusalem Post and the initiator and negotiator of the secret back channel for the release of Gilad Schalit. His book Freeing Gilad: the Secret Back Channel has been published by Kinneret Zmora Bitan in Hebrew and in English as The Negotiator: Freeing Gilad Schalit from Hamas by The Toby Press.