Ending the exploitation of asylum-seeking women

Without fairs laws and properly enforced, an abusive and exploitative work environment will continue to exist, one that preys specifically on the vulnerable conditions of asylum-seeking women. 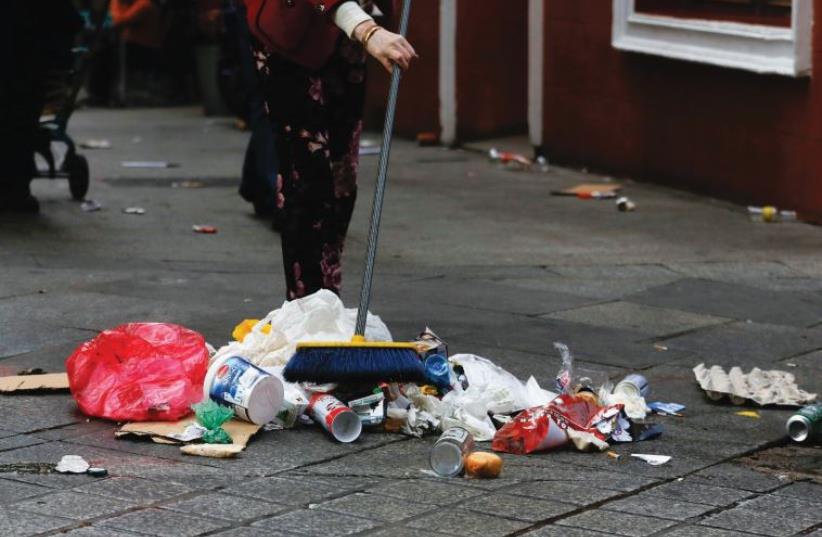 A WOMAN cleans a street. Many asylum-seekers say they have been abused in various ways by employers
(photo credit: REUTERS)
Advertisement
During a typical work week, Abeba, an asylum seeker from Eritrea, would clean up to 27 houses a day, seven days a week. For six years, she has lived and worked in Tel Aviv as a housecleaner. With no vacation time and only minimal bathroom breaks, she was often worked to the point of physical collapse.“You don’t even have time to drink water,” she said. “My body is almost dead.”Exposed to harsh bleaching chemicals on the job, Abeba’s eyes suffered severe damage, leaving her nearly blind.Despite the fact that she faced these hazards on the job, she was still forced to pay for hospital treatment out of her own pocket.“For years, I begged the agency to give me insurance, but the owner of the company didn’t want to pay the additional costs,” she said.Eventually, the employer, tired of Abeba’s requests, fired her. Abeba was forced to seek legal assistance through Kav LaOved, an NGO dedicated to the labor rights of all workers in Israel.Unfortunately, Abeba’s story is not unique. Israel is no stranger to the global refugee crisis and its subsequent presence in the labor force. In recent commemoration of World Refugee Day this past June 20, the UN High Commissioner for Refugees released a statement that by the end of 2014, 59.5 million people had become displaced around the world – the highest number to date. Approximately 45,000 asylum seekers currently reside in Israel, over 90 percent of whom are from Eritrea and Sudan, with women making up more than 14% of the population.Under Israeli law, all individuals employed by an Israeli employer are entitled to fair pay and social benefits, regardless of their legal status. Yet the visa situation surrounding asylum seekers in Israel continues to promote much confusion, both for employers and workers alike.Asylum seekers are eligible for a temporary visa that must be renewed every two months to extend their stay in Israel. The visa itself states that it is not a work visa, despite the statement made on August 29, 2010, by Israel’s Justice Ministry to the High Court, declaring that it would not prosecute employers using asylum seekers as workers.Additionally, the terminology used by the government, describing asylum seekers as “infiltrators” and “illegal work migrants,” also sets a negative tone for employers to follow.A significant and crucial sector of Israel’s economy is fueled by non-Israeli labor. Following a trend that began in the 1990s, with the government recruiting migrant workers from Eastern Europe and Southeast Asia, asylum seekers have also been absorbed into the secondary labor market. Most asylum seekers work in the secondary labor market, with 57% in 2013 employed through cleaning contractors at low-wage and temporary, exploitative jobs.More than 32% of asylum-seeking women are reported to be employed in the cleaning industry.Asylum-seeking women in particular face significant discrimination.Often an employer will fire a female worker if she becomes pregnant or create difficult circumstances to dissuade a woman from staying employed. When Kudusan, also from Eritrea, who has lived and worked in Israel for three years as a housecleaner, told her employer about her pregnancy, she was fired on the spot.Already the mother of a threeyear- old girl, Kudusan faced further discrimination by the contracting agency that assigned her work. The jobs she was given suddenly involved long, complicated commutes too physically stressful for a pregnant woman to endure. Such treatment had already become routine for Kudusan.“The biggest problem is that I would get fired after eight or nine months because the employer didn’t want to pay for the social benefits that belong to you in the former of insurance, pension, vacation, etc.,” she said.Kudusan also described how employers often didn’t give her time off to renew her visa.Instead she was fired and immediately replaced with another girl.“You feel so disposable,” she said.Now she has been unemployed for three months and struggling to support herself and her family.Without stable employment and a firm understanding of their rights, asylum seekers exist in a perpetual limbo of despair and exploitation. Language barriers also play a significant role.“Many employers use your ignorance against you,” Abeba said. “They trick you into signing documents that put you in bad situations or cheat you out of your benefits.”As one of the original signatories to the 1951 UN Refugee Convention, Israel has a moral obligation to uphold the labor rights of its most vulnerable population. Empowering asylum- seeking women through educating them about their labor rights and maternity benefits is an essential step toward ensuring fair labor practices. Yet without further changes in policy, Israel’s confusing labor laws will continue to foster a corrupt and exploitative work environment, one that undermines the basic moral principles of Israel’s founding, as Theodor Herzl himself said that “the wealth of a country is its working people.”The Israeli government must make the labor rights of asylum seekers clear. It must clarify that the rules and procedures that apply to Israeli employees also apply to non-Israeli employees.Without laws that are fair and properly enforced, an abusive and exploitative work environment will continue to exist, one that preys specifically on the vulnerable conditions of asylum- seeking women.