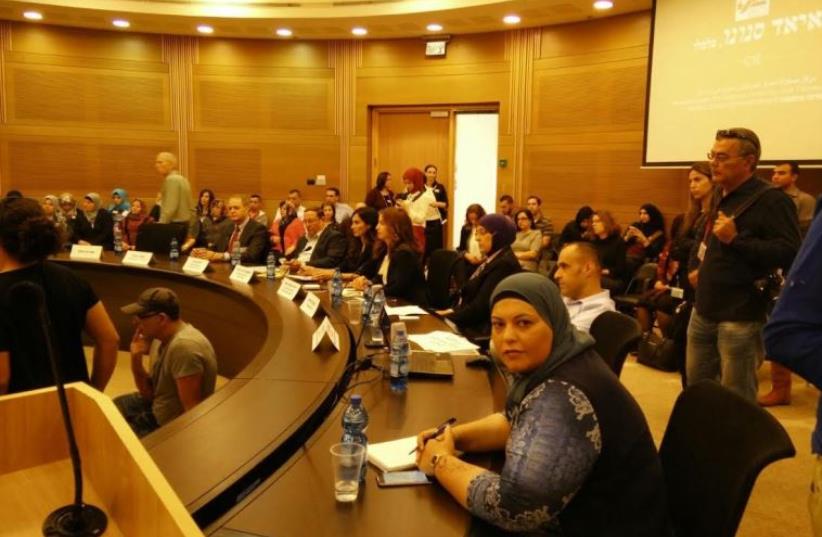 NAGAM NASRALLAH (foreground), coordinator of the Abraham Fund’s youth employment initiative, attends a conference at the Knesset yesterday about the problem of high unemployment among Arab women.
(photo credit: COURTESY ABRAHAM FUND)
Advertisement
As the hunt for the Israeli accused of murdering two café patrons in Tel Aviv last week expanded to the area of the suspect’s home village in the North, the words spoken by Prime Minister Benjamin Netanyahu on Saturday night about enforcing the law among the country’s Arab community take on greater significance.“We will demand loyalty to the laws of the state from everyone,” he declared on a visit to the scene of the Dizengoff Street shooting.This statement was understood by many to be directed at the Arab community at large, rather than fugitive terrorist suspect Nashat Milhem. This impression was not mitigated by Netanyahu’s complaint about “wild incitement by radical Islam against the State of Israel in the Arab sector,” as if he were confusing Israel’s Arab sector with the Palestinian Authority.An official in the Prime Minister’s Office shrugged off such criticism, calling accusations that Netanyahu is somehow inciting against Israel’s Arabs “ridiculous.”The official noted that, at the scene of the attack, “the prime minister started off by praising the moderate voices among Israel’s Arabs and the Arab citizens who had condemned the attack. He went on to point out that many Israeli Arabs are against violence and seek coexistence. Only after that did he speak out against the extremists, the incitement and the need to enforce the rule of law.”Netanyahu himself amplified this at the start of Sunday’s cabinet meeting.“When we established the government, I asked [Public Security] Minister [Gilad] Erdan, and later the police commissioner, to make a supreme effort to change something that has been true in this country for nearly 70 years: the lack of law enforcement in the Arab community,” he said.“[Arab] citizens are the ones suffering from rising crime, and all of Israel’s citizens suffer from the incitement and violence – both criminal and nationalistic – that hurt all of Israel’s citizens... We decided to change this reality, to enforce the law in all fields: construction laws that are completely unenforced, public noise laws that we hear [violated] from the mosques, the incitement in the mosques – and of course on social networks and in the education system – and the basic matter of the collection of illegal firearms that are pervasive in the Arab community.”At a meeting held by the Knesset Environment and Internal Affairs Committee on Wednesday to discuss the widespread proliferation of illegal firearms in Arab communities, figures were presented that showed in 2012, Israeli Arabs – who make up around 20 percent of the population – were involved in 67% of homicides and 70% of attempted homicides and made up around 40% of homicide victims.Yaakov Peri, Yesh Atid MK and former head of the Shin Bet (Israel Security Agency), described the outrageous figures as part of a wider failure of the state to deal with the problems of the Arab sector.“It’s a mistake to separate the problem of illegal weaponry from the other problems facing the Arab community, which include a shortage of police and police stations. This is not a problem caused by this prime minister, it’s been every prime minister. Every government has neglected the Arab sector,” he said.One way to change the reality facing the Arab sector in Israel is the government’s five-year plan that would increase funding for housing, education, employment of Arab women, infrastructure, welfare services and public transport, at an estimated cost of NIS 10 billion-15b.Netanyahu said at the time the budget was proposed that it “is a significant addition designed to assist the minorities and to reduce gaps.”A Channel 2 report on Monday night claimed that Netanyahu had appointed Likud ministers Ze’ev Elkin and Yariv Levin to oversee enforcement of conditions for the funds to be released, including issues of law enforcement and compliance with building regulations.MK Yousef Jabareen (Joint List) responded to the report by saying that the additional funding for the sector “is not a privilege, but a right. So we reject any conditions on these budgets and will struggle to make sure the full plan is implemented.”Officials in the Prime Minister’s Office told The Jerusalem Post on Wednesday that there was no truth to the report and that “there is no change” to the program.This funding allocated to the Arab sector will narrow gaps between the country’s Arab and Jewish populations, but we hope this will not prove to be too little and too late.