The time has come to punish protesters. 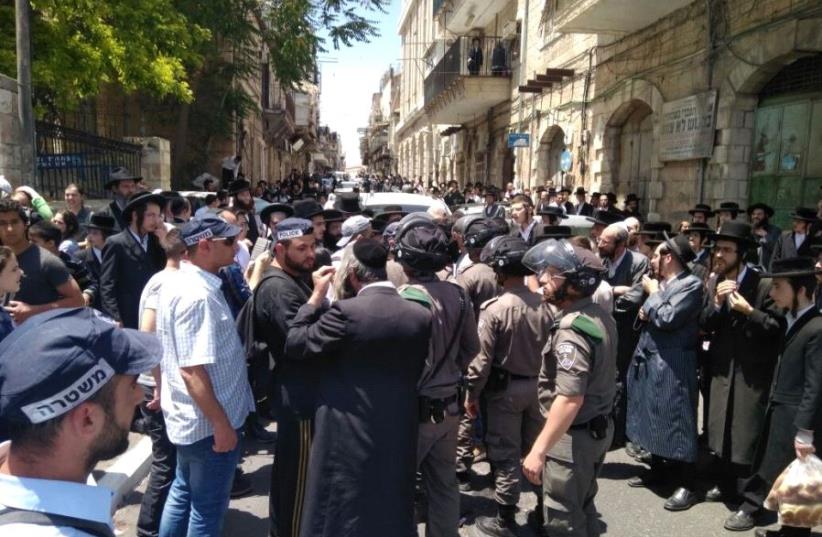 Haredi extermists protest against recruitment of Orthodox men into the army.
(photo credit: HAREDI EXTREMISTS PROTESTS GROUP)
Advertisement
It was such a beautiful scene on Tuesday: religious IDF soldiers walking the last 4 kilometers of their eight months of training, some with their tzitzit hanging out of their uniform pants, others with their peyot (sidecurls) flying in the wind, and all with kippot worn proudly on their heads.Singing “We are believers the sons of believers,” “Worship God with happiness,” and other religious songs, they marched and ran in full gear, carrying weighted-down stretchers, in the tradition of IDF soldiers in training.At the conclusion of this march, in which my son took part, and just before the ceremony where they received their IDF berets, these soldiers prayed the afternoon service, many with their eyes closed, some intensely swaying, others standing completely still. They thanked God for bringing them to this day, and prayed for their safety and the security of their country.At the exact same time as this ceremony, hundreds of other religious Israelis were blocking intersections throughout the country in the name of religion, in protest over the arrest of two draft dodgers. Why were they arrested? Because they broke the law: They failed to respond to the letters they received telling them to appear at their local IDF draft board. And for no reason: All these draft dodgers had to do was show up, claim that “Torah is their trade,” and they would have received exemptions from military service.But they didn’t bother to do that, flouting the law which requires them to do so. So they were arrested and imprisoned for three weeks. Did the police enter the yeshiva where these young men were supposedly studying Torah day and night in order to arrest them? No. They were caught driving recklessly while on vacation in the Dead Sea region. For that, hundreds of demonstrators blocked tens of thousands of Israelis from going about their lives. This is an embarrassment in a country a state of law.Enough is enough.It is time for authorities to come down hard on the “Jerusalem Faction” of the haredi community which sent these demonstrators to the streets, and which instructs its followers to ignore the law and not show up for their army exemptions.Every single one of these demonstrators who fights the police when they try to remove them from the roads must be imprisoned – not for a day’s incarceration as is done now, but for a minimum of six months. And their leaders – yes, including rabbis – must be brought in as well. There is a law against inciting to break a law, and those who violate it, especially when it involves educating and even commanding youngsters to violate the law, should be held accountable. We cannot allow anarchy.Israel has been patient with these “protesters” and has demonstrated remarkable restraint. But there comes a time when a country has to put its foot down and say: We will not tolerate this anymore.That time has come.The demonstrators and their leadership know that they won’t be really punished for their actions, so they continue ignoring the law requiring them to appear before the draft board, and continue to disrupt the country. During this week’s demonstrations, a policeman in Jerusalem was surrounded by these hooligans who were throwing rocks and other objects at his marked car, and blocking him from driving. He got out of this car with his pistol drawn. The demonstrators fled, he was able to drive on, and traffic on that street resumed. Is it comfortable for us to see a Jewish policeman wave his pistol at Jewish demonstrators? No. But did it work in order to restore law and order? Yes.Public Security Minister Gilad Erdan and Justice Minister Ayelet Shaked must join forces to strengthen the penalties for these extremist demonstrators, and must punish their leaders as well. Moreover, it is incumbent on Prime Minister Benjamin Netanyahu to support Erdan and Shaked and not worry about the haredim in his coalition revolting over these measures.It is also time for the mainstream haredi community to take a stronger stance against these extremists. MK Uri Maklev of United Torah Judaism was questioned about these demonstrators on Army Radio, and he said that while this is not his way and he thinks the protesters do damage, he doesn’t want to comment beyond that. No! Mainstream haredim must lead the way in condemning the Jerusalem Faction, and throw it out of the fold. The haredi leadership – if they are indeed the leadership – must support stricter policing and punishment of these religious zealots.Jewish tradition is clear how the Second Temple was ultimately destroyed because of religious extremism, infighting and zealotry.We cannot allow the same to happen to the modern Jewish state. We must continue to celebrate and support the thousands of young ultra-religious soldiers who join the ranks of the Israel Defense Forces, and who demonstrate daily that one can be a Talmudic scholar and be fervently religious while also serving in the Israeli army. And we must show zero tolerance, with harsh penalties, for those religious extremists and spiritual leaders who ignore the rule of law.The author served as a member of the 19th Knesset with the Yesh Atid party.