There might also be a bright side to the AKP’s victory. 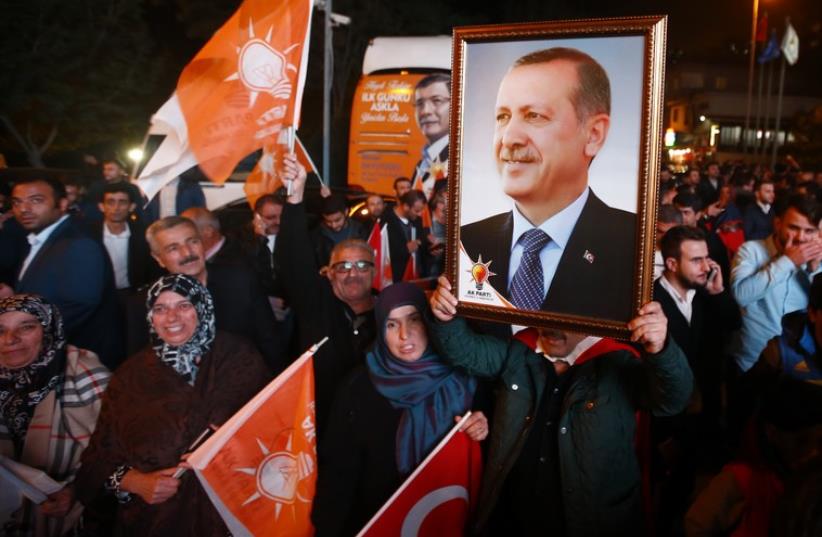 Supporters wave flags and hold a portrait of Turkish President Tayyip Erdogan outside the AK Party headquarters in Istanbul, Turkey November 1, 2015
(photo credit: REUTERS)
Advertisement
Can anything positive be gleaned from the sweeping victory of Turkey’s Islamic Justice and Development Party (AKP) in Sunday’s elections? From nearly every possible perspective, the victory of the AKP and the imperious President Recep Tayyip Erdogan seems bad.It is bad for Turkey’s democracy. Once a rare model of a Muslim country that nevertheless managed to maintain basic democratic principles – such as an independent judiciary and press and a limitation on the encroachment of religious dictates on citizens’ lives – Turkey under AKP’s rule has changed.Assaults on a free media, the sidelining of independent prosecutors and judges, intimidation of opposition politicians, and the AKP’s indulgence toward jihadists are some of the changes instituted by the AKP since its rise to power in 2002.Because some European Union leaders want Erdogan and the AKP government to be more helpful in stemming the flow of refugees (Turkey, a NATO member, has taken in more Syrian refugees than any other country), they have shown a willingness to ignore Turkey’s human rights violations.This year’s European Commission annual assessment of Turkey, which was expected to be highly critical of the government’s undemocratic measures, has been quietly postponed.It is also bad for Turkey’s military interests. In a calculated move designed to push down the vote for the pro-Kurdish People’s Democratic Party (HDP), Erdogan, who in the past has been a brave proponent of a peace settlement with the Kurds, torpedoed negotiations with them. Turkey has since launched air strikes against Kurdish strongholds in Syria and Iraq. These are the same Kurds who have been so effective in the war against Islamic State and troops loyal to Bashar Assad. Meanwhile, inside Turkey a string of shootings and bombings has been carried out, including a horrific double suicide bombing in Ankara on October 10, widely attributed to IS, which killed 102 people.It is bad for Israel as well. Once upon a time Israel and Turkey were nurturing important strategic ties. Military cooperation was strong and the two countries advanced shared interests. (Economic ties between the two countries continue to be strong.) Erdogan and other AKP politicians have not just taken the side of Hamas in confrontations with Israel. During Operation Protective Edge in the summer of 2013, Erdogan accused Israel of carrying out war crimes “worse than those of Hitler and the Holocaust.”More recently, during the tensions surrounding the Temple Mount, Erdogan, during a meeting with Hamas political chief Khaled Mashaal, accused Israel of harming the al-Aksa Mosque. Hamas terrorists such as Salah al-Arouri have been allowed to operate freely in Turkey.But there might also be a bright side to the AKP’s victory.Turkey needs a steady government. The economy has slowed, inflation and unemployment have risen and the lira has fallen in value. Erdogan and the AKP have proven in the past that they can provide strong economic leadership.Under Erdogan, the AKP did much to reform Turkey and improve its economy. This recognition among Turks seems to be the main reason for the AKP’s victory.And political stability in Turkey might also be good for Israel, according to Gallia Lindenstrauss of the Institute for National Security Studies. Lindenstrauss argues that the AKP victory and the relative stability this brings to Turkish politics might actual contribute to the re-normalization process that began after Prime Minister Benjamin Netanyahu apologized to Turkey for the Mavi Marmara incident.Part of that re-normalization process might also include more Turkish involvement in developing the Palestinian economy. In addition to the rebuilding of Gaza, Turkey has shown interest in advancing a multinational project to establish an industrial zone in Jenin. In September, a semi-official Turkish delegation visited Israel to that end.Israel is open to fostering better ties with Turkey. One of Dore Gold’s first missions after being named director-general of the Foreign Ministry was to work with the Turks on improving ties. Gold has met with Feridun Sinirlioglu, the Turkish government’s point man on Israel in recent years.Since then, Sinirlioglu, a confidant of Turkish Prime Minister Ahmet Davutoglu and a former ambassador to Israel, has been appointed Turkey’s foreign minister.So perhaps there are some reasons to be optimistic about the AKP’s victory.